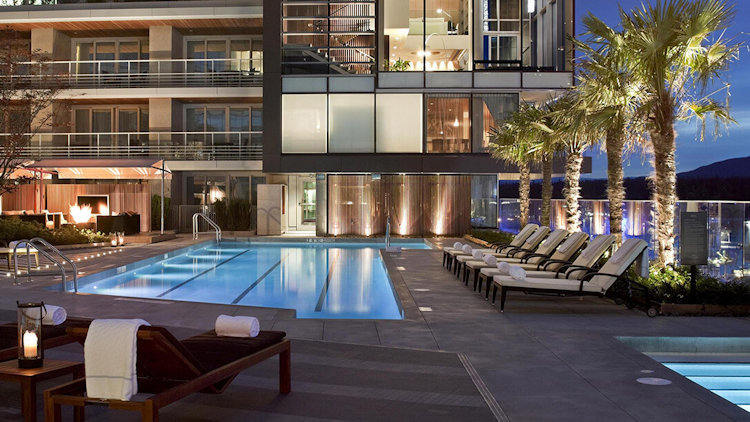 Fairmont Pacific Rim is Vancouver’s definitive luxury hotel with unobstructed views of the harbour, nearby mountains, and the city skyline. Since opening in 2010, the property has garnered industry success being rated the World’s Best Business Hotel by Condé Nast Traveler readers and awarded the coveted Forbes Travel Guide Five-Star and AAA Five Diamond Ratings. With numerous exquisite food and beverage selections, Fairmont Pacific Rim is a destination for luxury travel and local visitors alike and has come to be regarded as Vancouver’s living room.

Vancouver native Damon Campbell brings over 20 years of cooking experience to his position as Executive Chef at Fairmont Pacific Rim, presiding over the property’s various culinary programs, business gatherings and social events and in-room dining. Praised for his dedication to ingredient-driven cuisine and a passion for showcasing local producers and purveyors, he takes a globally-inspired approach to his cooking style that lends itself to the culinary techniques refined through his years of international travels.

Jason Cisneros, Director of Food & Beverage at Fairmont Pacific Rim, is another veteran of the industry with 20 years in the business. Growing up in the Bay area and starting his career in Oakland, Cisneros made the move to Vancouver in 2016 when he accepted a role leading the hotel’s Lobby Lounge & RawBar. He has a passion for sustainability, community and driving innovation, which he has brought to his roles at Fairmont Pacific Rim over the past five years.

Botanist, located on the second floor of Fairmont Pacific Rim, celebrates harmony with nature in an environment as rich and diverse as the terroir it represents. Boasting a restaurant, cocktail bar, a garden and TASCHEN Lounge all in one, Botanist is a vibrant part of Vancouver’s robust culinary scene. Helmed by Executive Chef Hector Laguna, Botanist was named to the 50 Best Discovery list by the World’s 50 Best Restaurants. The menu depicts the culinary abundance and botany of the Pacific Northwest region with produce rooted from the soil of the northwest, sustainably sourced seafood, and organic agricultural methods from backyard suppliers. Dishes include the dry-aged duck breast with roasted onion and red mole, and pan seared strip loin with gnocchi and green peppercorn jus. The inviting restaurant space transports guests into a world where day blurs into night, summer into winter, and food and drink are plenty.

Since opening, Botanist Bar has received notable accolades including one of the top 10 bars in Canada by Canada’s 50 Best Bars, ‘Bols Around the World’ World’s Best Bar Team, Regional Honorees - Best Restaurant Bar by Tales of the Cocktail Spirited Awards, and named one of the best new bars in the world by the 2018 Condé Nast Traveller Hot List. Head Bartender Jeff Savage has created artistic libations for adventurous drinkers, like the What The Flower with gin, electric daisies, cherry blossom tea, ginger, lemon and cardamom, and the Botanist’s Martini, with coastal gin blend, vermouth, seaborne tincture, oyster leaf and vegan caviar.

Perfect to start or end the evening, The Lobby Lounge & RawBar is a haven for live music enthusiasts, cocktail connoisseurs and all seafood lovers, offering Vancouver’s first 100% Ocean Wise sushi destination at its ultra-sleek RawBar. Known for its innovative presentation and quality of ingredients, diners can enjoy a selection of sushi rolls and donburi bowls, paired well with hand-crafted cocktails like the B. Lucky which is a fruity and floral adaptation of the classic and elegant French 75 and the spicy and smoky La Rachera. While sitting in the lounge, guests are blanketed by the sound of the custom-designed, Italian crafted Fazioli piano and the shimmer of chic chandeliers from noon until night.

In 2022, the property plans to continue to showcase its culinary prowess through ongoing creative programming. In January, Chef Campbell will host ‘Hot Chefs Cool Jazz’ – a gala in support of Junior Culinary Team Canada and Culinary Team BC (competing in Luxembourg in 2022 for the World Culinary Competition and in the Culinary World Olympics in 2024). To celebrate Lunar New Year in February, Fairmont will be serving dim sum at The Lobby Lounge for a festive celebration. A few weeks later, Chef Laguna will serve a specialty prix-fixe dinner at Botanist for Valentine’s Day, ideal for couples looking for an intimate getaway. During Vancouver Cocktail Week in March, Botanist will host their second annual brunch for the event featuring cocktails created and hand-crafted by the city’s top bartenders paired with courses from Chef Laguna’s seasonally launched brunch menu. Botanist will also relaunch the Garden Club, a limited dinner series in which Chef Laguna partners with Downtown Eastside Neighbourhood House’s Urban Farm to create a specialty menu. A portion of sales from every reservation for the Garden Club will be donated directly to the DTES Neighbourhood House, and guests will have the opportunity to also donate individually during their dining experience. Botanist will also be partnering with Langdon Hall for a multi-course dinner for the Visa Infinite dining series on April 13. Lastly, following a successful run last summer, Fairmont will bring back their popular food truck pop-up in partnership with Oakridge and Westbank to offer one of the city’s most unique outdoor patio dining experiences for the summer months.