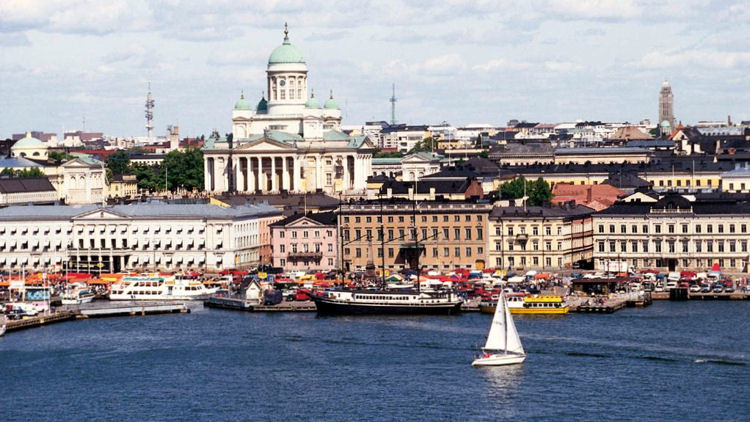 Design should never say “Look at me.”  It should always say, “Look at this.” And so it does. A few years back, Helsinki, Finland was chosen to be the World Design Capital and true to the quote, Helsinki - indeed all of Finland - never says “Look at me,” but in its quiet restraint, dignity and joie de vivre, one is compelled to look at it all, savoring the country’s stark beauty, the artistic, cutting-edge design visible everywhere, and most especially the people of this land who make you feel most welcome.

This stylish, relaxed city is a dream destination for walkers as most of the important sights are conveniently situated in the city’s center.  There are eighty intriguing museums here, enough to keep you busy for your entire stay. One appealing feature of Helsinki’s location is that there are ferry connections to Estonia, Sweden and St. Petersburg, Russia.  Visitors often plan a one or two day excursion, using Helsinki as home base.

The Design District is Helsinki’s arts and crafts-oriented neighborhood.  The area is a cluster of creative businesses that offer a wide range of designer shops, interior decorating studios, antique dealers and jewelry boutiques. I visited some of the workshops and saw design being created right before my eyes.  At a silver shop, I looked on as the designer made a lacy, filigree pendant and added the finishing touches to a heavy silver ring set with a fine piece of jade. At the innovative be&liv studio, they offer contemporary home décor and lifestyle items; I was seduced by an adorable tabletop accessory, a decorative fruit bowl made of individual petal-like pieces. Its organic shape resembled that of a perky pink flower and I quickly decided that this piece of whimsy was going home with me!

When one thinks of cool, elegant design, thoughts invariably go to Marimekko. A company founded in 1951 by Viljo and Armi Ratia after their oil cloth factory failed, they asked some of their artist friends to apply their graphic designs to textiles. They then begin using this fabric to sell a line of simple dresses. In the 60s, Maija Isola designed the iconic Unikko (poppy) pattern and about that same time, a true symbol of a designing woman, Jacqueline Kennedy, bought eight Marimekko dresses that she wore throughout the 1960 presidential campaign.

Market Square is lively and bustling with vendors selling everything from berries to clothing and jewelry.  I had a pleasant morning sitting at a cafe, drinking coffee brewed strong and steaming, complimented by some fresh Finnish cloudberries, and allowing myself to be caressed by sea breezes right beyond my table. 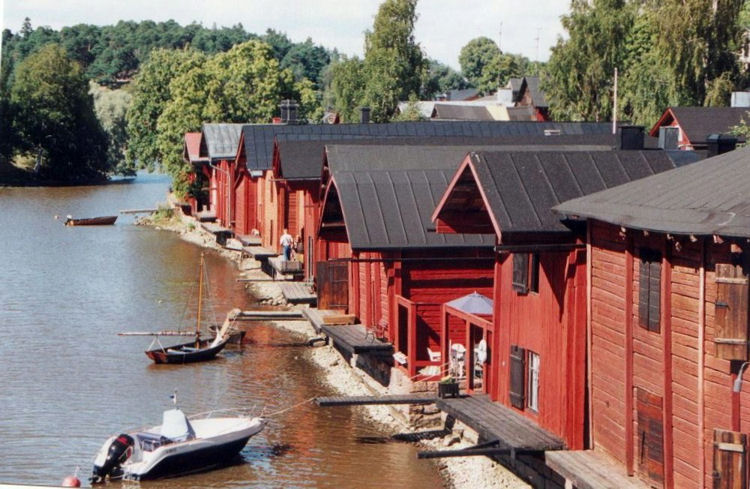 Because you won’t have time to see all eighty of Helsinki’s museums in a single visit, may I suggest one that you must not miss: the Ateneum Museum houses the largest art collection in the country displaying Finnish art from the 1750s to the 1960s and Western art from the late 19th century to the 1950s.  It also contains the first Van Gogh ever placed in a museum and it is here that you’ll view a most haunting painting titled “The Wounded Angel” by Hugo Simberg.  It depicts an allegory of two boys transporting a blond child-angel. The lead boy trudges along dutifully, the boy in the rear gazes sullenly out at the viewer. At the time this was painted, there were many charity institutions in the park where this procession is said to take place. The sweet, white-clothed angel, eyes bandaged, her wings drooping forlornly, gives off an air of resignation as she is carried to the Blind Girl’s School. “The Wounded Angel” was voted Finland’s national painting, and you’ll remember it long after leaving The Ateneum.

One memorable evening, I had the pleasure of attending a Jean Sebelius concert by the Tapiola Sinfonietta held at Helsinki University Hall, the very room where Sebelius began his career in 1899.  Conducted by the renowned Leif Segerstam, rotund, dynamic and compelling, he lent an air of excitement to the entire concert.  Segerstam is irrepressible and joyous so it was quite fun to glide along on his flourishing baton as he conducted the glorious Symphony #1 in E minor. 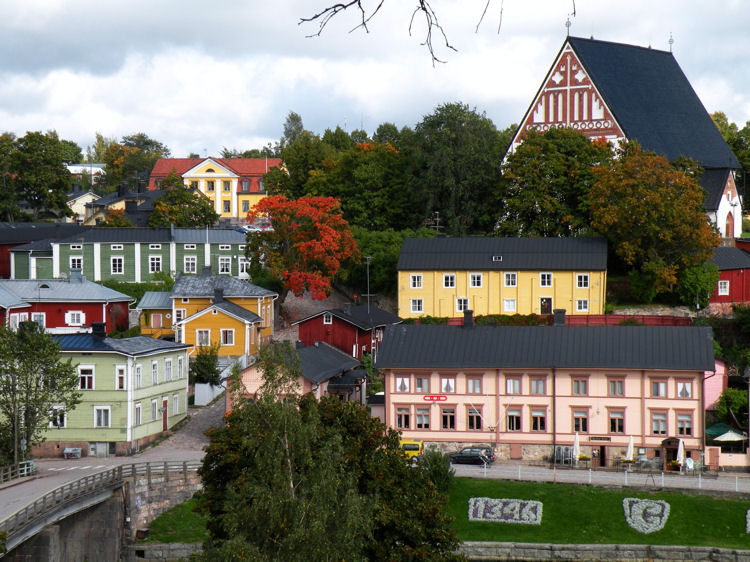 A convenient hour’s drive east of Helsinki, Porvoo is Finland’s second oldest town, history-rich, with ancient red, wooden storehouses that line the river and testify to the city heyday as a major port for merchant ships plying the world’s oceans.  High on a hill sits Porvoo’s most recognizable landmark – the Lutheran Cathedral, which has dominated the town since the early 1400s.  We strolled through Old Town, built on a dense labyrinth of narrow cobblestone streets and alleyways and lined with colorful cottages, galleries and boutiques.

It is there that we explored the Porvoo Museum with exhibits on the town’s history, including artifacts and art.  Recently opened is a fine exhibit on Porvoo’s prehistoric times and the Middle Ages.  Holm House, a part of the museum, was built in 1763 and offers an opportunity to see how a wealthy merchant family lived at the end of the 18th century.  Porvoo is known for its sweets so naturally we couldn’t leave without answering the call of our sweet tooth.  Locals told us to visit The Little Chocolate Factory on Church Square.  True to its name, the shop was so tiny we were barely able to fit through the door.  But, not to be deterred, we were rewarded with rich and sumptuous chocolates, a treat I’d squeeze through this door for again in a heartbeat! 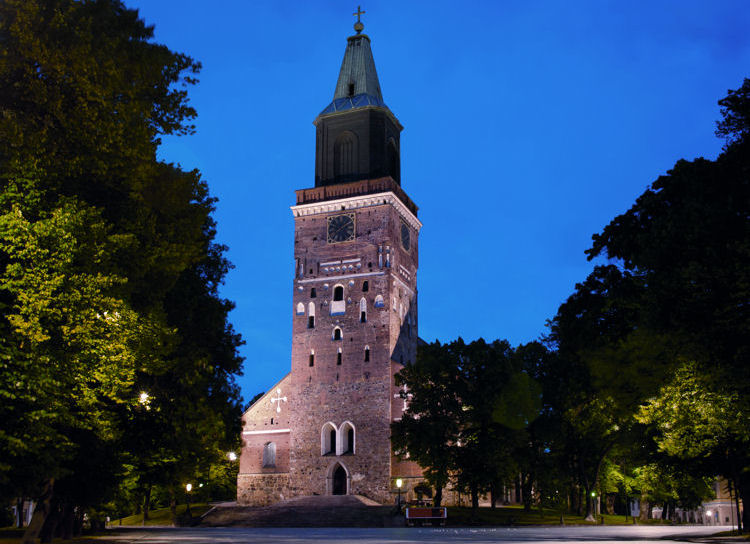 This place has played a very vital role in Finnish history, being the oldest city in the country and the first capital of Finland.  Founded in 1229, Turku is situated in the southwest region, the oldest inhabited area dating back 8,500 years.  Fast forward to modern times: Recently Turku has been recognized as a European Capital of Culture, together with Tallinn in Estonia.

Turku today, with its pristine countryside and nearby amazing archipelago, provides lush and imposing sights to behold.  The area is famous for its manor houses where historical figures lived and reigned, surrounded by lovely parks and gardens. We climbed up Unikankare Hill to Turku Cathedral, the heart of the Lutheran Church in Finland and the country’s national shrine, completed at the end of the 13th century. How fortunate were we that, as we stood gazing at the intricate carvings in the ceiling, the cathedral’s famed 81-stop organ, built by the Finnish organ-building company extraordinaire Veiko Virtanen, began playing.  Surrounded by so much imposing beauty and the soft, musing tones of this special organ, it seemed to be a truly authentic moment drawn from days of yore.