Fit for a Queen: Homage to Queen Elizabeth II at InterContinental London 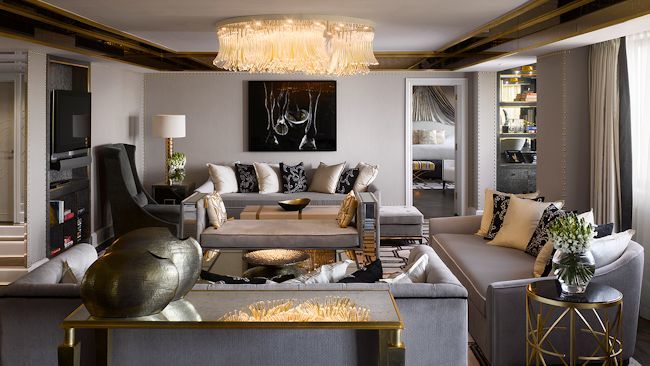 Given the suite's debut in 2012, Her Majesty's Diamond Jubilee year, the designers were captivated by the location's noble pedigree. For the first decade of her childhood, The Queen lived in a building once located on this site, after which the Royal Family moved to Buckingham Palace when her father King George VI succeeded to the throne.

The Gallery has created a suite modelled in part after Her Majesty's acclaimed fashion sense - as seen especially in Cecil Beaton's photographs of her as a young woman. The new design also honours The Queen as both a tender family person and an archetypical figurehead respected around the world. Her ability to balance compassion with strength and power has been expressed in the décor through the juxtaposition of opposites: the soft with the hard; the flowing with the structured; and the feminine with the masculine. In the living room, for example, silk-effect wallcovering is bordered by round brass nailheads, and a chandelier in a sinuous floral shape is formed from rigid glass rods.

VIPs from around the globe will be residing in the 135 sqm Royal Suite and The Gallery's intention has been to create a temporary home which will be comfortable for them all. So while the designer's inspiration has been specific, the suite's references to royalty are subtle and are woven into a classic design that encapsulate the styles of the decades from The Queen's birth in 1926 to the present moment.

The result blends Art Deco touches with a contemporary interpretation of the opulent finishes found in royal palaces. Reflective surfaces creatively woven into the interiors increase its sense of spaciousness and luminosity. In the living room, antiqued mirrors border the coved ceiling to create an illusion of height, the coffee and side tables have glazed finishes, and a tufted leather bench is supported by a mirrored base.

Flowing directly from here is the dining area, which is highlighted by a glamorous inbuilt cocktail cabinet whose mirrored back panels reflect the colourful liqueurs on its backlit onyx shelves. In addition, a beautiful cocktail trolley has been created expressly for the suite, and a full-height frame in grey lacquered Bolivar veneer holds a television that can be concealed by sliding doors or viewed from either the living or dining spaces within the open plan.

The suite's subtle palette of warm platinum and pearly cream creates feelings of calm and comfort; this is highlighted by accents in soft shades of yellow, The Queen's signature colour. From polished and satin brass trims to cushions with golden embroidery, her favourite hue brightens the ambiance with lightness and sophistication. The classic loop-shaped clasp found on Her Majesty's iconic little black handbag also provided inspiration for the designers. This motif has been incorporated into the rooms' ironmongery, with bespoke drawer pulls and door handles forged into this shape as well as the brass nailhead pattern on the doors. Exquisite details such as these are what create the Royal Suite's abundant sense of luxury. 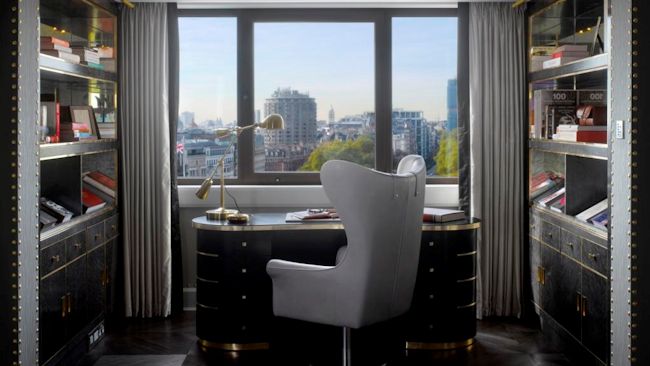 The library has been imagined to be a place where The Queen diligently pursued her duties. Honouring both her respect for the past and her commitment to keeping the royal institution relevant today, the interiors blend the classic with the contemporary.

A traditional writing desk inlaid with narrow brass strips around its oval frame feels graceful and, with its nautical flair, subtly references British naval prowess. In contrast, a stylised interpretation of a white leather wingback desk chair smartens the library with its modern shape. A sweeping view of London through the 8th floor window completes the sovereign experience.

In the bedroom, floor-to-ceiling antiqued mirrors adorn the wall behind the bed, reflecting the lustrous finishes of the space. Overhead, soft silver satin is gathered to form a draped bed canopy. The floral pattern of its tone-on-tone lining was inspired by the flower arrangements from Cecil Beaton's own garden which he used as backdrops in his portraits of the princess to emphasise the softness of her facial expressions.

Sitting in the window nook overlooking Park Lane is a chaise longue upholstered in taupe velvet. Above this, a pleated satin valance frames the window and echoes the curves of the bed canopy. The plush wool carpet used here and in most of the other spaces has a geometric pattern in grey hues. In the renovated bathrooms, creamy white marble vanity counters and cladding are brightened by yellow accents and mirrored surfaces to create sparkle and an immediate sense of spaciousness. Images of frolicking corgis, The Queen's favourite breed of dogs, add joie de vivre.

The designers have commissioned a special collection of artwork for the Royal Suite: a painting of Hyde Park and black-and-white photos of the adjacent St. James's Park sit alongside framed antique postcards, sketches of The Queen's finely detailed hats, and a signed contemporary giclée print by Ann Carrington that depicts stylised regal themes. Through the artwork, The Gallery conveys the spirit of Queen Elizabeth II, completing its tribute to Her Majesty.