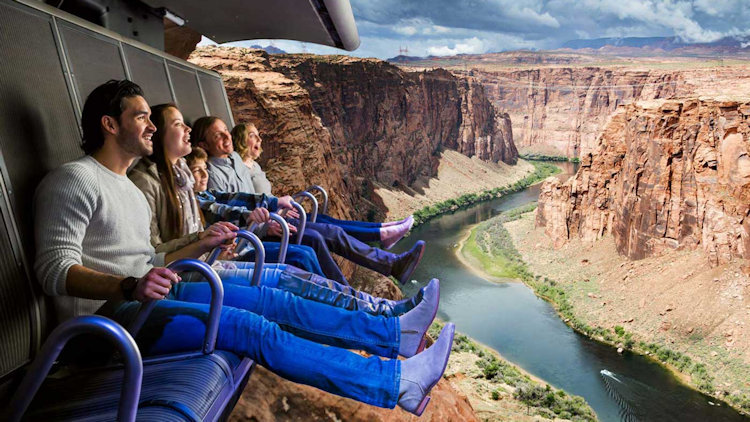 FlyOver uses state-of-the-art technology to give visitors the feeling of flight. Shown in stunning 8k resolution on a massive 52.5ft screen, location specific mists, scents and wind fully immerse guests in the action taking place all around them on a spherical screen. Fliers glide over landmarks in Nevada, Oregon, Washington, Montana, California, Arizona, Utah, Colorado, Wyoming and New Mexico.

The 25-minute experience begins with a six-minute pre-show by Montreal-based Moment Factory. Setting the stage for the flight to come, guests learn the history of the booms and busts of the American West, where scenes such as the Cambrian explosion to the ghost towns of Gold Rush are shown on a dynamic 360-degree video wall.

After the pre-show, visitors then board the flight ride, where they soar to tremendous heights. Land, sea and sky are all shown throughout the film, punctuated with a captivating musical score by GRAMMY-nominated composer Tom Holkenborg.

Highlight destinations and sights include:

The Real Wild West was created by some of the entertainment industry’s most creative minds, including creative director and former Walt Disney Imagineer Rick Rothschild and Cannes Lion Award-winning film director Dave Mossop of Sherpas Cinema.

Before or after the flight ride, guests can peruse FlyOver’s lobby that transports guests from The Strip to a zen-like slot canyon. Entering from Las Vegas Boulevard, guests happen upon an “endless hallway” that detaches them from the sounds and action of the outside world. Imagery, sound, color and lighting are used to seemingly take guests to the bottom of a canyon where The Lost Cactus bar offers a variety of food and beverage options, including mocktails and specialty frozen drinks.

Located next to the Hard Rock Café and across from T-Mobile Arena on Las Vegas Boulevard, FlyOver in Las Vegas is open daily from noon – 8 p.m. to guests of all ages, with tickets starting at $24 for children and $34 for adults. Children must be at least 40 inches tall to ride.