Following Your Passions in Cambridge 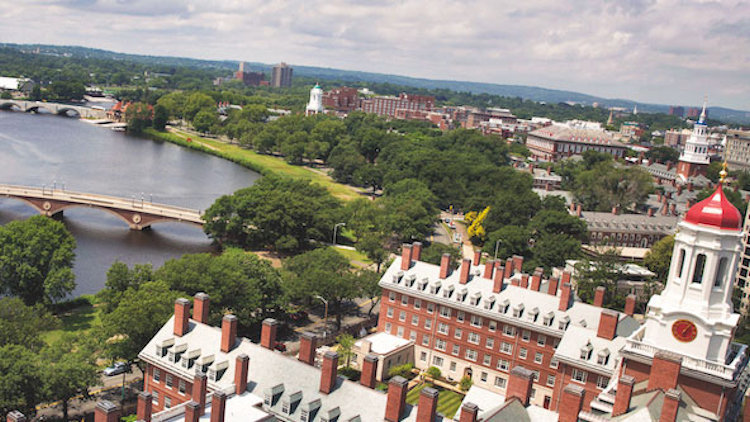 “Find something you’re passionate about and keep tremendously interested in it.” Sage words, indeed, from the illustrious late Cantabrigian Ms. Julia Child. And in the fine city of Cambridge, Massachusetts there’s oh so much to be passionate about.  In this place you may be engrossed in changing the world but it’s all in a day’s work. Here one can rub tweedy elbows with challenging scholars, have a slice of the best pizza of your life or join an African drumming class. No matter the neighborhood, Cambridge’s scene teems with eclectic energy.  After all, when you have nearly four centuries of history – not to mention the glorious Charles River to wake up to each day - well every moment in this city is worthy of joy: contagious, probing, playful joy.

Visiting recently with my friend Lisa, a long-time Cantabrigian, she shared that one of her great pleasures of living in Cambridge is the palpable sense of the past.  One has but to scratch the surface, she said, to find a story waiting to be sniffed out.  On her daily constitutional, she typically passes a large brownstone dog statue that sits watch in a private garden on Ash Street near Harvard Square.  Pawing into the provenance of this statue, a neighborhood landmark, Lisa found that the statue, one of a pair, has sat on this lawn since it was brought there from the Sands Marble Works more than a century ago.  Apart from this discovery, the path ultimately proved as cold as the stone the statue is made of.  An artistic enigma, is it a forgotten work of some well-known sculptor? Is it a copy of a late Italian piece – like those Molossian dogs that guard the entrance to the Uffizi in Florence? Tiring of sniffing around tangential trails, Lisa finally had to pull hard on her own leash and command herself to just “leave it!” Ah, Cambridge…. 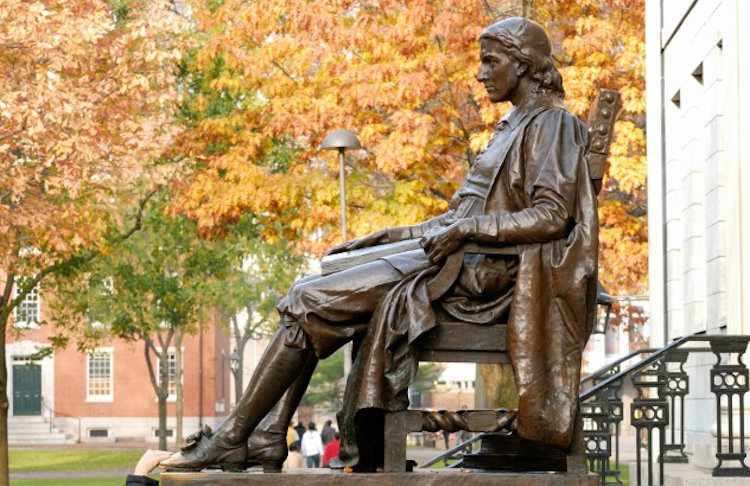 No visit to Cambridge would be complete without taking the Hahvahd Tour. On a sparkling, autumn-hued morning (the very best time to experience Harvard), I met my guide and a small group to embark on a 70-minute student-led walking tour of the University, one of this country’s top colleges founded in 1636.  Jason, our guide and a current student, was well informed, and offered unique perspectives on college life at this famed institution where 44 current and former faculty members are Nobel laureates!

The oldest section of the University is the 25-acre Harvard Yard.  There were the brick facades of the dorms, libraries and classrooms, and Jason pointed out Old Yard, including Harvard’s oldest standing buildings, Massachusetts Hall, Sever Hall, the Widener Library and the Harvard Lampoon; also the statue of John Harvard, the University’s founder. This statue is probably the most touched object at the school. Its left foot, shiny from human contact, is subjected to almost incessant rubbing by tourists believing that doing so brings good luck. I struck the classic pose, placing my hand on old John’s shoe, and an obliging fellow tourist took my photo.  I mean, how could I not?

One of my great passions is anything Bauhaus so I made sure that, before departing Harvard,  Lisa and I visited the Harvard Art Museums that hold one of the largest collections relating to the Bauhaus, 20th century’s most influential school of art and design. We saw provocative paintings by Lyonel Feininger and Jean Arp, as well as important Marcel Breuer contributions to the world of furniture design, such as his iconic Cesca chair. Do not miss this on your Harvard visit. 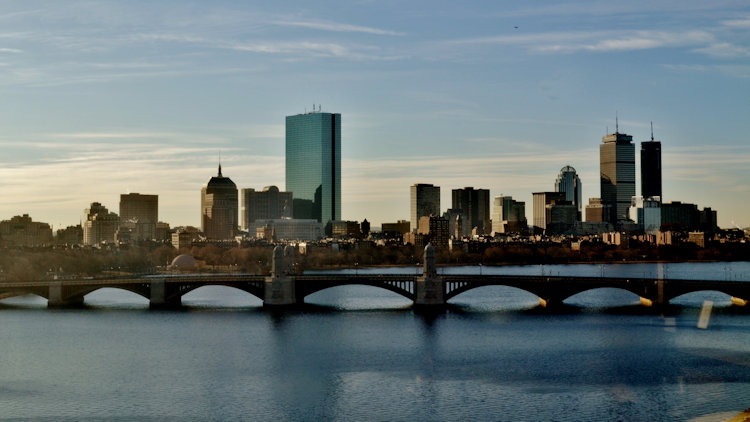 While in Cambridge I guested at the Royal Sonesta, an AAA Four Diamond property. From my room I enjoyed views of the spectacular Boston skyline and a glistening Charles River.  Most memorable though was my dinner at Dante, the hotel’s fine dining restaurant, an eponymous hot spot named “Best Italian” by Boston Magazine.

Two very doable side-trips from Cambridge that I took advantage of: first, skimming over the Charles River to Boston, cruising the harbor on Classic Harbor Line’s yacht Northern Lights, and then kicking back at pretty Les Zygomates, a Paris-inspired wine bar and bistro, dining on French fare with good, live jazz purring in the background. 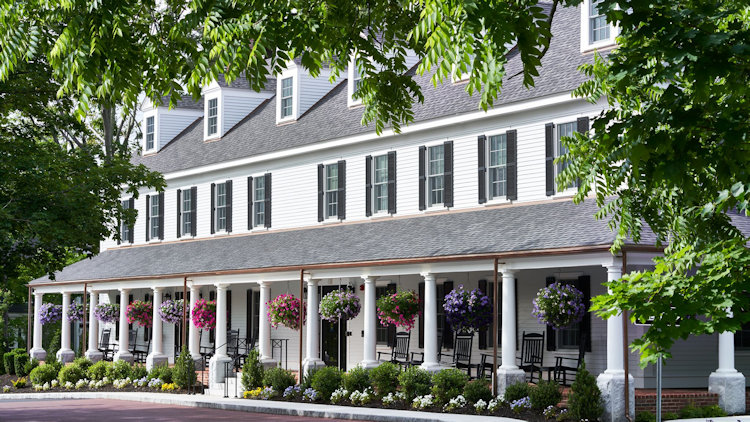 Another quick jaunt from Cambridge that took less than an hour:  Groton, Massachusetts and my destination, The Groton Inn. The property has 60 tastefully kitted-out rooms, world class service, and, last but certainly not least, the celebrated Forge & Vine Restaurant.

What an incredible and colorful history, this hotel that calls itself “America’s oldest Inn.” Dating from 1678 and overlooking picturesque Gibbett Hill, the original structure burned to the ground in 2011 and was happily reopened seven years later. It has been meticulously and thoughtfully reimagined, drawing inspiration from classic New England architecture and the area’s rich colonial past. 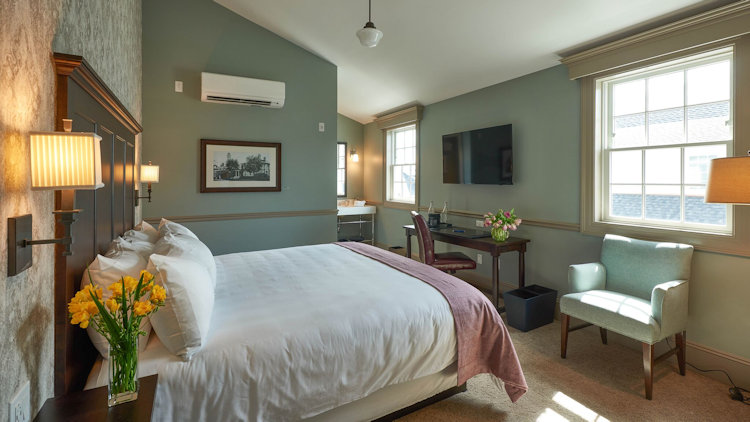 Once checked in, I wandered the tiny town and explored a few boutiques; one of the prettiest, Indigo of Groton, a clothing and home decor store obsessed with beautiful design.  I loved its wide selection of housewares, decorative pieces and clothing both from local vendors and sourced from around the world. A fun shop to be sure.

Then on to Groton’s Old Burying Ground, a site slightly more somber but historic and handsome. It is the town's first formal burying ground and has 340 grave markers dating from 1721 to 1909. After taking images of this haunting place – and feeling all the while a bit like an interloper on hallowed ground – I said goodbye to Groton and headed home - once again to re-enter the madding 21st Century.  I will, though, safeguard my New England memories for all time.