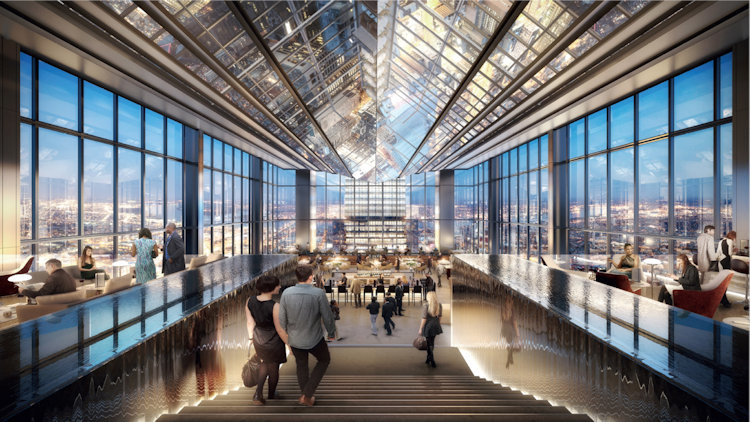 The all-new Four Seasons Hotel Philadelphia at Comcast Center is located atop the 1,121 foot (342 metre) Comcast Technology Center in the city’s vibrant downtown, offering unobstructed views from the 48th to 60th floors at the building’s very summit.  The 219-room Hotel, which also includes new restaurant concepts by Jean-Georges Vongerichten and Greg Vernick, a full-floor spa and wellness sanctuary and extensive meeting spaces, is now accepting reservations from arrivals starting on August 12, 2019.

Designed by Norman Foster of Foster + Partners, the new Comcast Technology Center has redefined the skyline of one of America’s most storied cities.

Visitors are soon reminded of the relationship between innovation and nature as they are greeted by stunning installations from celebrity floral designer Jeff Leatham, who is the Artistic Director of the Hotel.  Moments after check in, guests enter one of 180 rooms and 39 suites to find yet another expression of art and technology in Philadelphia Dorian, a composition of on-screen video and sound created exclusively for Four Seasons by musician, record producer and visual artist Brian Eno.

In partnership with Comcast, all guest rooms and suites will offer the award winning X1 Video Experience, including approximately 300 channel options and a complimentary library of more than 50,000 movies and shows on demand, all searchable with the X1 voice remote.

Above It All: Dining and Drinking at Four Seasons

On the 59th floor, the city of Philadelphia spreads out toward the horizon on all sides of Jean-Georges Philadelphia, a new restaurant by Michelin starred Chef Jean-Georges Vongerichten.  Forty foot (12 metre) high glass walls afford panoramic city views, while a cleverly mirrored ceiling reflects both the diners below and the city that surrounds them.  It’s an inspiring location for a power breakfast or a lunch-time refuge from the busy streets below, and the restaurant promises to be the pinnacle of dining in the city as sunsets give way to sparkling evenings.

Up a grand staircase flanked by waterfalls that bisect the space, Foster gives patrons an opportunity to literally raise a toast higher than ever before at JG SkyHigh cocktail bar on the 60th floor.

On ground level, James Beard award winner and hometown hero Chef Greg Vernick highlights his unique approach to modern American dining at Vernick Fish, which spills into the street in an easy indoor-outdoor environment created by Tihany Design, their first project in the city. Chef Vernick refers to the restaurant concept as a modern take on an American oyster bar, with unexpected flavour combinations featuring the freshest fish and shellfish accompanied by cool cocktails and wines.

Spa Director Verena Lasvigne-Fox has created an inspiring wellness menu incorporating top products exclusive to Philadelphia. Coupled with the rhythmic and meditative sounds of singing crystal bowls, the effect will be one of pure bliss and relaxation among the clouds. Lasvigne-Fox is an award-winning Spa Director with more than 15 years’ experience overseeing up to 16 spas for Four Seasons across Europe and the Middle East.

Meet Me at Four Seasons

More than 15,000 square feet (1,400 square metres) of flexible function spaces – including two ballrooms easily accessed on the fifth floor – offer a canvas on which to create all manner of business and social events, from high tech conferences and private board meetings to glittering galas and society weddings.  The Hotel’s expert planners partner with the culinary team led by Executive Chef Maxime Michaud to tailor worry-free events hosting 25 to 500 guests.

Wedding couples and event planners may inquire about facilities and site tours by calling +1 215 419 5000.

The lobby of the Comcast Technology Center is an artistic passage between city and skyscrapers, with distinct and custom art installations continuing Philadelphia’s longstanding reputation as a hub of art and ideas. Across the ceiling and up the stairs, artist Jenny Holzer has created For Philadelphia, a moving installation of nine electronic displays designed specifically for this site.  The writings of poets, architects, visionaries and children echo the spirit of the city flowing colourfully throughout the space.  Also within the vast atrium is the largest public art commission by British artist Conrad Shawcross, titled Exploded Paradigm, which sees the artist continuing to explore the tetrahedron and exploit its possibilities, a fitting concept for both Comcast and Four Seasons.

Located in the heart of Center City and just minutes from the Barnes Foundation, the Kimmel Center for the Performing Arts, Rittenhouse Square and The Liberty Bell, the unmatched location of Four Seasons Hotel Philadelphia and the Comcast Center Campus allows business and leisure travellers to experience all that the city has to offer.

This summer and fall, the new Four Seasons is the perfect place from which to explore Philadelphia for the first time, or all over again. The smash Broadway hit Hamilton is finally coming to the city where much of its namesake’s story took place, and the new Franklin Square Fountain Show will soon debut. From historic sites to the latest happenings in the city, Four Seasons is a gateway to discover it all.

Be one of the first: Four Seasons Hotel Philadelphia is now accepting reservations and confirming arrivals beginning August 12, 2019.  Reservations can be made by calling 1 800 819 5053 or by booking online.