Fun in the Sun at Maui's Grand Wailea 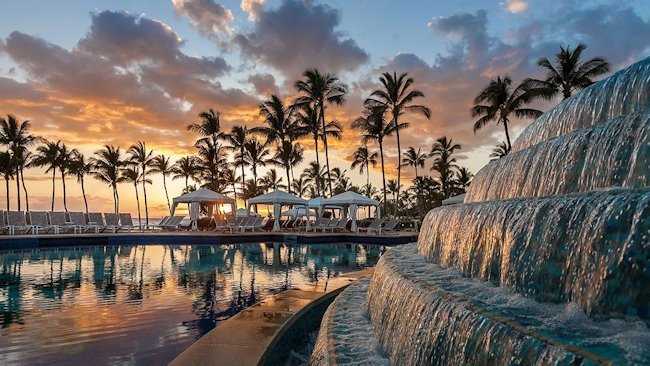 Scattered clouds decorated the bright blue sky overhead. The palm trees lining the swimming pools and water park swayed as the warm offshore breezes pushed inland. I stood at the top of a water slide eager to plunge into the cool water below.

But I had to wait.

Three eight-year olds were ahead of me. New to water slides, I watched their technique. The boys sat down and let the water do the work. Unlike her friends, the girl took a moment to get ready. She wanted speed. She held on to the sides and catapulted herself into the water.

Now it was my turn. I wanted to go fast like the girl, so I followed her lead. Down I went, twisting right, then left until the rush of water pushed me over the vertical drop. For a split second I was suspended in the air before I canonballed into the water.

I came up laughing. That was crazy-fun. Wiping the water out of my eyes, I saw the three eight year olds swim off to the left on their way to the next slide. To the right, there was a waterfall. Adults swam underneath and disappeared into a cave. What was going on? I followed and discovered the swim-up Grotto Bar, complete with neon signs and a large HDTV.

Now I knew why the Grand Wailea is such a popular destination. Adults and kids share equal billing. Everyone has a good time. 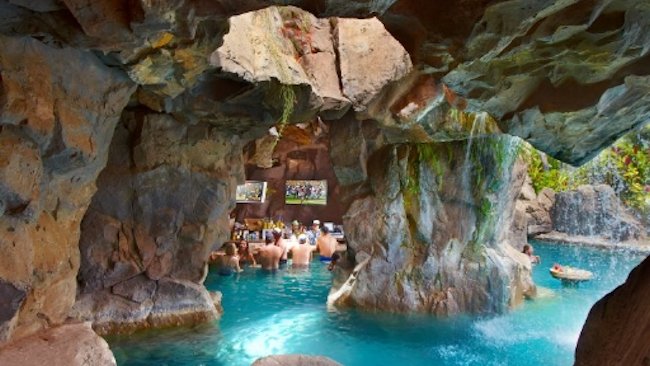 A Hotel Designed for Relaxation and Rejuvenation

With plenty of luxury in a relaxed setting, anyone who wants to unwind will be happy sitting on the beach, lounging around the pools, eating in the hotel's restaurants, socializing at the bars, enjoying Maui's beautiful scenery and visiting the spa.

With 50,000 square feet, the spa has room for rejuvenating baths, forty massage suites, a full service beauty salon and a fitness center.

To maximize the benefits of their treatments, guests are invited to spend the hour before their massage in the Termé Hydrotherapy Circuit.

My termé experience began in a small tiled room with water on the floor and a hose. Lying on the table, masseuse Keli'I scrubbed me with an exfoliating glove and a mango-honey body wash.

With my skin tingling from the loofah treatment, I relaxed in a series of five baths, each treated with different blends of Hawaiian salts and minerals. Next came an encounter with the spa's cascading waterfall massage.

Stepping into a narrow stall, I sat on a submerged seat. From a fixture in the ceiling, a two-inch diameter stream of water fell in a great rush. Unlike the gentle waterfall fixtures found in home showers, the spa's version sent 30 gallons a minute onto my head and shoulders. Refreshingly forceful, the water relaxed tired muscles.

Continuing my termé experience, I was shocked awake in a cold-water plunge, had my skin invigorated by the alternating hot and cold needle-spray water jets in the Swiss shower and soothed in the warm waters of the Jacuzzi. Having been scrubbed, jabbed, and calmed, I was now ready for a massage. 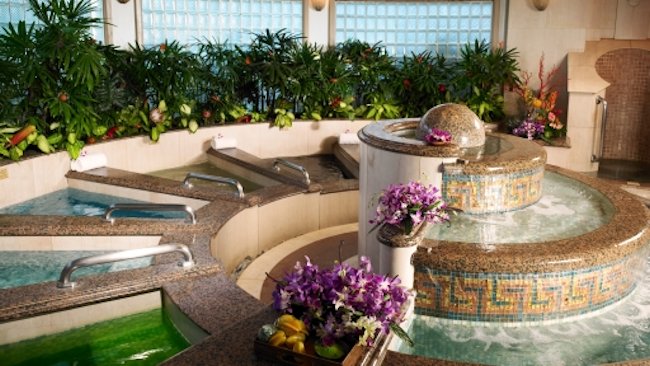 For my massage, I wanted a masseuse who would be gentle yet firm. Using joyously, by hand's Yakima Peppermint Yoga Balm, masseuse Carey Carroll coaxed my body to a peaceful level of serenity. Time dissolved in the rush of pleasurable moments.

Roused from a massage-induced sleep, Carey led me to a chaise lounge in the relaxation patio, an open-air deck overlooking the Reflecting and Hibiscus Pools. The vast blue ocean stretched in the distance. As she left, she handed me a bottle of water, advising me to hydrate. I fell asleep before I could take a sip.

Pampering adults is to be expected at a resort like the Grand Wailea. What a happy surprise that children are given the same attention. Even in the Spa, there are treatments specifically designed for children 6-17 years of age. In the Keiki & Teen Spa, massages and facials use an assortment of fun oils and lotions like chocolate-coconut, coconut-papaya, pineapple and tropical fruit.

At some resorts, facilities for kids are an afterthought. Not at The Grand Wailea. In addition to the water park with kid-friendly shallow swimming pools, water slides, a rope swing and a fun attraction called the water elevator, the hotel created as many facilities for the tween-and-under set as for adults. Those include a 20,000 square foot children's center called the Rock, Camp Grande with a day-time and an evening program of activities, arts & crafts and on-property excursions, Ohana Hale, a karaoke lounge, and the Spot, a teen lounge with a pool table, foosball and video games. 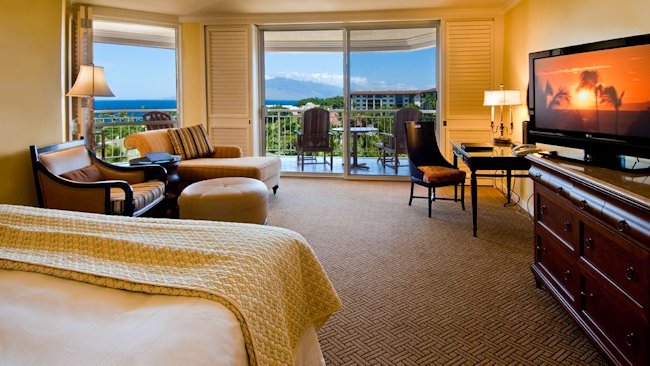 To enjoy the beach, a large area has been set aside for hotel guests. The Robert Trent Jones, Jr. designed 19-hole golf course and an 11-court tennis club take advantage of Maui's spectacular weather. For activities in the ocean, the hotel offers scuba diving, snorkeling, paddle boarding, kayaking and outrigger boating. Instructors can be booked for hourly or half-day excursions on the water.

In addition to the hotel's 780 rooms and the concierge-supported 100 rooms in the private club, Tapua Tower, extended stay suites are available at Ho'olei, with fully-furnished 3-bedroom, 3.5 bathroom residences. Designed for groups or families who want privacy in a secluded residential setting, Ho'olei is located off the beach. All the suites are furnished with state of the art entertainment systems, luxurious kitchens, stainless steel barbecues, outdoor patios, garages and community areas that have a mini-version of the hotel's mix of adult and kid-friendly pools, grottos and fitness centers. 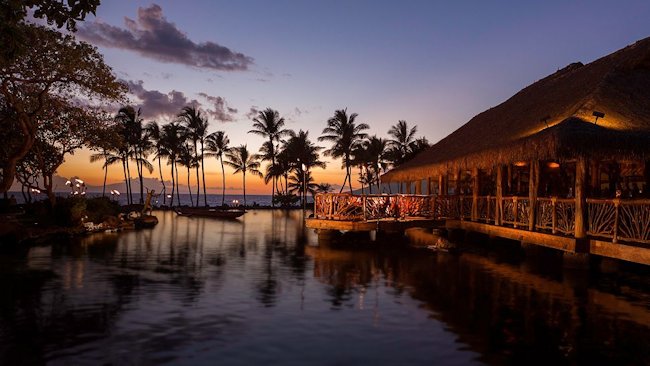 The Grand Wailea sits on a crescent beach sheltered on either side by lava-jetties. The waves are too gentle for surfers but perfect for young kids to boogie board in the warm water.

One morning I sat on the beach just after sunrise. The early morning sun colored the white sand pink. I expected to have the beach all to myself. But I was not alone.

Sunbathers wanting a prime spot on the beach settled into their chaise lounges. For a day of snorkeling, boats sailed to Molokini crater, the small island in the distance. Dads and moms walked their toddlers into the gentle surf. A yoga instructor led a class of thirty through a routine of stretches. Joggers ran on the stone path overlooking the beach, up the hill and along the cliffs to the south.

We all had the same thought. As nice as the rooms are at the Grand Wailea, why stay inside and waste a moment when you could be outside enjoying paradise? 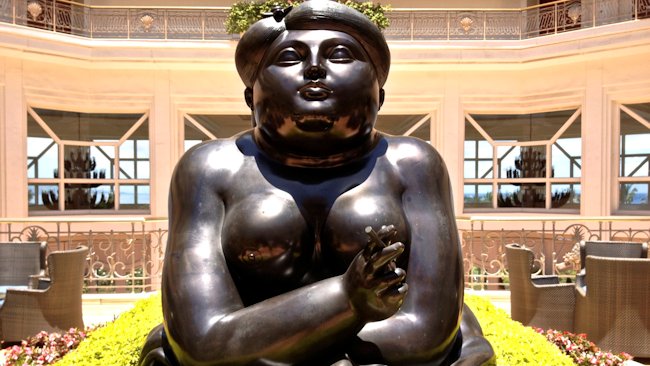 The Grand Wailea was filled with surprises. Because this was Maui, I expected great natural beauty. What was unexpected was the world-class art displayed in the hotel. Facing the main entrance, Herb Kawainui Kāne's statue of King Kamehameha I paid tribute to the warrior who unified the Hawaiian islands.

Adjacent to the front desk, the lobby level open-air promenade seemed like a lovely way to get from point-A to point-B.

A closer look revealed an art gallery mixed in with the tiled pools and planters filled with colorful tropical plants. Life-sized statues of Hawaiian male and female hula dancers by Jan Fisher held their poses in the shallow ponds that define the lobby. But what really impressed were the Fernando Botero bronze sculptures, many of the figures hidden by lush tropical plants. Plump men alone, women alone and men and women together were depicted lying in repose in various states of dress, undress, happiness and unhappiness.

A half flight below the lobby is the circular Botero Bar. The invitingly large space is dominated by three large Botero sculptures. In one, a voluptuous woman cradled a man-child in her arms. Across the patio is a companion sculpture, a man in a bowler hat leaning casually on a thin cane.

Gazing down on both those sculptures is the Woman Smoking a Cigarette. Even though her massive size is intimidating, Botero gave her a relaxed expression. Completely at ease, the Sphinx-like figure reclined on a bed of brilliant yellow flowers.

Given the great body of art in the hotel, guided walking tours are offered on weekdays. As much fun as it is to look at art, for some guests, making art is even more entertaining. For anyone who wants to try their hand at creative expression, there are photography and painting classes with artists-in-residency. 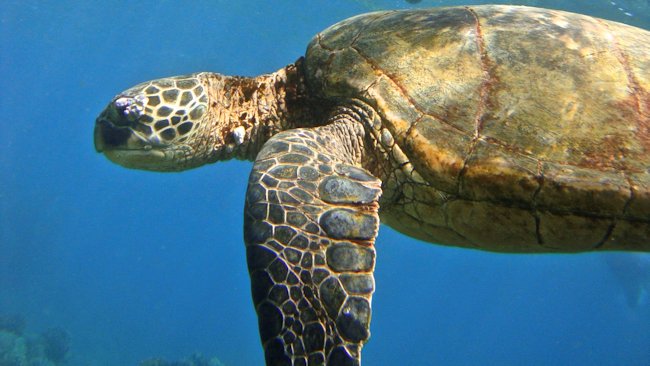 A giant sea turtle in the coral reefs off the Grand Wailea Hotel beach, photograph by Chrisotopher Corbat

Resting up and exploring the island

After relaxing for several days on the property, I was energized to visit other parts of the island.

Cars can be rented for the day or longer periods in the hotel lobby or by prior arrangement and picked up at the Kahului Airport. Speedi Shuttle, also known as Arthur's Limousine (877/242-5777, www.speedishuttle.com) can supply cars and drivers for a few hours or several days to help guests go shopping and explore the island.

We visited nearby MakÄna National Park to the south of the Grand Wailea. “Big” and “Little” beach are favorites of locals who love the area, even though they know that the surf can be dangerous for inexperienced swimmers. “Little” beach is popular with clothing-optional sunbathers.

Farther away, we explored Upcountry with its cattle economy and cowboy culture. We stopped in Makawao at the cross roads of Highways 390 (Baldwin Avenue) and 365 (Makawao Avenue) where we shopped at the stylish clothing store, Holiday & Company Maui, Inc. and then picked up local produce and prepared foods at the Rodeo General Store. 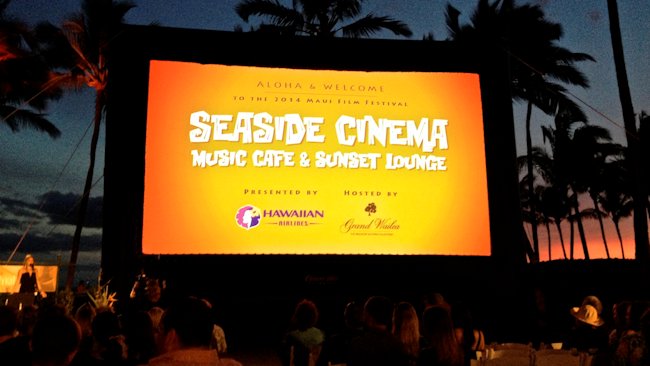 Added Value Venues for Weddings and the Maui Film Festival

Hawaii is one of the world's preeminent romantic destinations. To accommodate those who want to seal their love with more than a kiss, the Grand Wailea built the stained glass Seaside Chapel for intimate weddings. Lovers who want to take their vows outside under the expansive Maui sky can do so on grassy areas overlooking the chapel and the lagoon. For a bride and groom who believe it takes a village to make a wedding, the Molokini Garden can accommodate 2,500 guests.

The hotel can coordinate all aspects of the wedding including accommodations, receptions, dinners, floral arrangements, the ceremony itself and the wedding dinner.

Well-established in the island's cultural life, the Maui Film Festival introduced a new venue in 2014. The Grand Wailea's expansive lawn close to the beach was transformed into the Seaside Cinema with seating for 600. For five nights, as the sun set behind the inflatable movie screen, a live band played as the crowd got settled.

As guests of the hotel, we were encouraged to attend the festival. I didn't need much encouraging. I mean, really, what could be more fun for someone who grew up going to drive-in theaters? Except here, the drive-in was an outdoor sit-down theater, with palm trees swaying in the background.

The sun set. The smoky tiki lights flickered in the darkness. Drinks were ordered from the full bar. The projector came to life. I sipped a vodka tonic with lime and settled into my comfortable folding chair to enjoy Magic Men, a funny, moving, quirky film from Israel and Greece.

Nothing could be better.