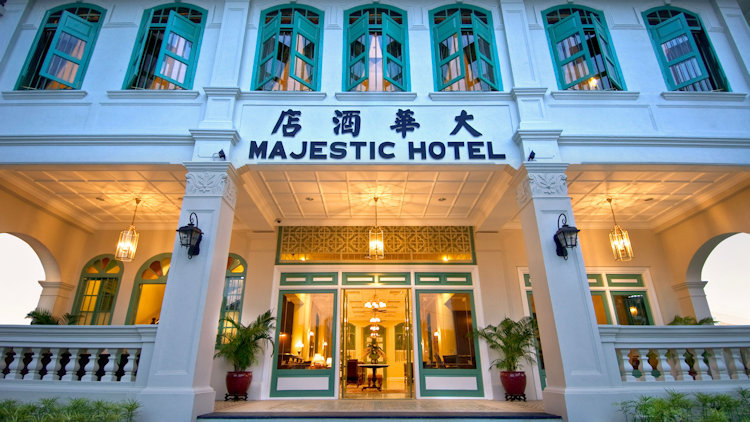 Each of YTL Hotels’ properties is full of unique legends and an impressive history, making every stay a stunning and educational experience. From the land one is built on that monks once called home in the twelfth century, to ancient coins found in the bones of the foundation of another, if these hotels could speak, they would have hundreds of years-worth of stories. Here’s more:

A restored 1920s Straits Settlement mansion complete with its original porcelain tile flooring and teakwood fittings, the Majestic Malacca provides a glimpse into the splendid saga of an extraordinary empire. Located on the banks of the small fishing village of Malacca, the Majestic is an integral part of the area's colorful history of being a commercial hub for the trade of Eastern treasures, including silk and porcelain from China, textiles from India, spices from the Moluccas, and more. Today, the property has been carefully extended to house guest rooms and suites as well as an award-winning spa that is a reflection of that era, melding luxury, modernity, and tradition.

Cameron Highlands was named after William Cameron, a British Government surveyor who discovered it in 1885 on a mapping expedition but failed to mark his discovery. It was not until 1925 that Sir George Maxwell recorded Cameron's discovery and developed it as a hill station attracting British colonials and expatriates, including British planters who realized the potential of its fertile mountain slopes for growing tea. Promising splendor, romance and nostalgia, the interiors hark back to its grand colonial heritage with tall French doors, timber-beamed ceilings and plantation shutters combined with the colors and textures of Jim Thompson’s famed Asian silks. This is mirrored in the friendly service, where traditional English charm merges seamlessly with discreet Asian hospitality.

Today, tea plantations, strawberry farms, and glowing evening sunsets serve as the backdrop for the luxurious Cameron Highlands Resort, a haven for travelers who adore romance, seclusion, and nostalgia from a grand colonial past. The boutique hotel rests on the largest hill retreat in Malaysia and is surrounded by lush greenery, providing amazing views of the rolling hills.

Among elegant Georgian townhouses, The Academy Hotel is a 50-bedroom boutique hotel made up of five Georgian houses, located at 21 Gower Street in the prestigious literary hub of Bloomsbury. Situated in the heart of London’s West End, the streets of Bloomsbury are rich with history – blue plaques commemorating famous events or historical figures line Gower Street. Founded in Bloomsbury, The Bloomsbury Set was a group of associated English writers, philosophers, and artists, that included Virginia Woolf, as well as E. M. Forster, and Lytton Strachey in the first half of the 20th century. The Academy is a quick ten-minute walk to Virginia’s home in Fitzroy Square. The charming hotel pays homage to the Set that called Bloomsbury home in the key literary pocket of the capital, offering a sophisticated space dedicated to the group. Filled to the ceiling with books, the Alchemy Bar and Library immerse guests in the lives of the artists and authors whose works line the walls.

From its legendary beginnings as a thermal spring with healing waters, Bath has endured 2,000 years as a leisure and wellness destination. The Gainsborough Bath Spa is located in a city that has been shaped over centuries by Romans, warrior-kings, and merchants, and has been considered a UNESCO World Heritage Site as of 1987. Centered around the natural thermal waters believed to have come from rainfall approximately 10,000 years ago, the hotel occupies two 18th century buildings with distinguished Georgian and Victorian façades that were originally built as two hospitals. During an excavation in 1864, the foundations of The Gainsborough were laden with hidden treasures from an intricate 4th century Roman mosaic, as well as a Victorian era time capsule. Nearly two centuries later in 2007, 17,500 Roman coins weighing about 120kg were also discovered among the foundations, dating back to 32 BC. Now, after exquisite restoration designed by Alexandra Champalimaud, the hotel’s colorful history shines through its subtle period details combined with contemporary forms.

The former head offices of the London City and Midland bank, The Threadneedles Hotel is located in the historical business district of London. Sensitively adapted into a striking lobby, bar, restaurant, and hotel with 74 luxurious hotel rooms, the 130,000 square foot building is the City’s oldest surviving premises for a joint-stock bank. The original building, built in 1856, was home of the London City and Midland Bank, and the stunning stained-glass dome in the lobby is an iconic centerpiece dating back to the days when it was used as a bank. Impressively preserved, it floods the lobby with the same natural light that filled the bustling bank lobby in the 19th century.

Situated on a private island in the River Thames at Bray, Monkey Island Estate is a centuries-old retreat. With picturesque views and beautifully manicured gardens, visitors can find their own private countryside escape to relish in, and immerse themselves in a rich history of dukes, monks, and monarchs. Monkey Island’s remarkable and intriguing history dates back to 1197, when monks attached to the Merton Priory settled nearby. 300 years later, the clergy sold the island onto the Englefield family, but it wasn’t until the 1666 Great Fire of London that the island was a suitable site for building. In 1723, the land was sold to the 3rd Duke of Marlborough, who created an angling retreat and had a two-story Fishing Temple and octagonal Fishing Pavilion commissioned by architect Robert Morris. The Pavilion featured a Monkey Room, slathered in depictions of monkeys punting, fishing, and hunting. In 1956, after the island’s golden era, the Duke’s old idyll was linked to shore by a 1956 footbridge, then the island was sold in the 1980s, and shuttered its doors until 2019. The island has hosted showbiz royalty, famous literary visitors, and now, visitors from all over the world who seek out the hotel’s Floating Spa, bespoke cocktails at The Monkey Bar, or delectable modern take on British classics at The Monkey Island Brasserie.

The Glasshouse – The Patronage of Lady Glenorchy

Originally founded by Lady Glenorchy as a free church for the less-wealthy, the gothic façade of The Glasshouse in Edinburgh is what remains of the chapel that was constructed in 1846. Funded by Viscountess Glenorchy, she dedicated her life after her husband’s death to furthering evangelical causes in Scotland. In addition to holding evangelistic services in her Edinburgh home for the rich and the poor populace, she also established several chapels in Scotland and England that were dedicated to providing the poor a dedicated place of worship.

Today, the congregation who worshipped at what is now The Glasshouse Hotel take service at the nearby Greenside Church, keeping the patronage of Viscountess Glenorchy alive. In its updated form, The Glasshouse Hotel offers a sumptuous homemade Scottish afternoon tea in their cozy Snug – a perennial favorite among guests and boasts floor-to-ceiling windows in each room that make the most of the dramatic views of Edinburgh.