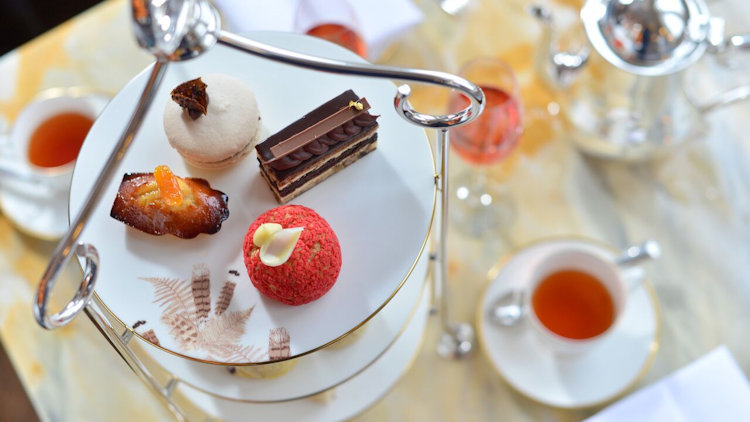 When creating the ‘Lady Claire Macdonald Afternoon Tea’, Lady Macdonald, owner and founder of Michelin-starred Kinloch Lodge, took inspiration from her ancestral home in Skye, an island off the coast of Scotland.  Bringing the best of Scottish home cooking to Gleneagles, Lady Macdonald champions Scottish produce throughout her cooking. Famed for her seasonally sourced home-grown ingredients, her Afternoon Tea is a truly Scottish experience with a menu made up entirely of her own creations, offering a twist on traditional afternoon tea delights. Lady Claire Macdonald’s sweet treats include indulgent dark chocolate brandy squares, melting moment biscuits and hazelnut shortbread. The menu will be available to guests from November 12 – 18.

The delightful tea will be served in the newly refurbished Glendevon, an elegant room with design celebrating the natural hues of Scotland’s flora and fauna that opens into a stunning sun terrace on which afternoon tea can be enjoyed al fresco. Each menu is available for £40 per person or £57.50 including a glass of rosé champagne.

Since opening its doors in June 1924, Gleneagles has been one of Scotland’s most iconic hotels and sporting estates. Set beneath the Ochil Hills, in the heart of Perthshire, it has been the must-go destination for travelers for nearly a century. Beginning its life in the glamorous age of travel when guests arrived in great style at Gleneagles’ very own train station, the 850-acre estate epitomizes the natural beauty for which Scotland is famed. With its glorious playground of country pursuits and activities, the hotel is reclaiming its position on the social calendar. Now under new owner Ennismore, Gleneagles has enlisted the skills and expertise of some of the UK’s most acclaimed designers including David Collins Studio, Timorous Beasties, Macaulay Sinclair, Goddard Littlefair and Ennismore’s own in-house design studio – with the aim to create designs and spaces that celebrate the rich, glamorous heritage and beautiful architecture for which the hotel is famed.