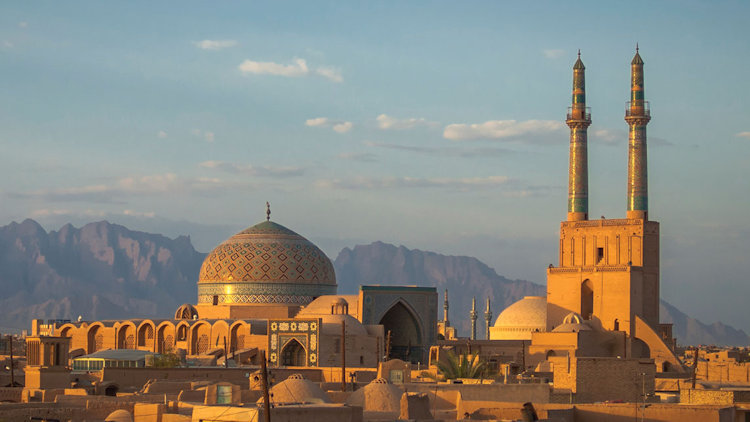 In 2019, Golden Eagle Luxury Trains, the world's leading operator of luxury rail tours by private train, will celebrate its 30th anniversary with the introduction of a remarkable new rail journey: Persia and the Silk Road. This new 16-day route aboard the elegant Golden Eagle train will sweep across Central Asia and Iran to offer a fascinating glimpse into these mystical countries, rarely experienced by the western traveller. In addition, due to high demand, 2019 will see the unveiling of a brand new Imperial Suite, the most spacious cabin available on the Golden Eagle - the original two Suites have almost sold out for next year’s journeys already.

Following unprecedented demand, the Golden Eagle will welcome a new Imperial Suite from May 2019, bringing the total number of top suites aboard the luxury hotel on wheels to three. The new Imperial cabin, measuring a spacious 120 sq ft, will benefit from a king-size bed, private en suite bathroom with power shower and under-floor heating, and the option of in-suite dining. Imperial passengers are also provided with a private car and guide at the destinations visited along the way.

Follow in the footsteps of ancient traders through some the world’s most remote corners on this unique new rail journey between Almaty and Tehran. The adventure begins in cosmopolitan Almaty, where the Golden Eagle is waiting to whisk passengers westwards across Kazakhstan, Uzbekistan and Turkmenistan to see some of the most magnificent, yet rarely visited, sites from the ancient world. Highlights on the Silk Road include: viewing the world’s oldest Koran at Tashkent; discovering the stunning architecture of Samarkand, once one of the most important cities in Asia; and stepping back in time in the ancient cities of Bukhara and Khiva, both UNESCO sites and significant trading posts at the crossroads of Asia. Also visited is Darvaza’s famous gas crater which has been burning for over 40 years, and the modern city of Ashgabat, known as the ‘Las Vegas of the Kara Kum’, built on the ruins of the Silk Road city of Konjikala.

After a change of wheel sets at the border town of Sarakhs, the Golden Eagle crosses onto the standard gauge tracks of Iran for the second leg of the voyage to the heart of Persia. Head off the beaten track, albeit from the comfort of a luxury hotel train, to trace the legacies of the Persian Empire. Here there will be opportunities to visit the sacred city of Mashhad, as well as Yazd – thought to be one of the oldest cities in the world, and the well-preserved castle at Rayen. Lunch in the Prince’s Garden at Mahan, the Hamam Ganj Ali Khan complex at Kerman and a trip into the Shahdad Desert to view the Kalouts, the beautiful, ever-changing sand formations carved by the wind, all follow. The final stops ahead of Tehran, the journey’s end, are Isfahan, once Persia’s capital, and famous for its array of historical monuments and life-giving river, the Zayandeh-Rood; Persia’s cultural capital Shiraz; and the impressive ruins of Persepolis, perhaps Iran’s most important archaeological site dating back to the 6th century. The trip concludes with two nights in Tehran.

Price: from £15,195pp based on 2 sharing, including 3 nights’ hotel accommodation (1 in Almaty, 2 in Tehran), 12 nights’ on the Golden Eagle in Silver Class, all meals, drinks with meals (with generous allowance of quality wines, excluding Iran where no alcohol is permitted), fully guided off-train excursions programme, porterage, arrival and departure transfers, services of a Tour Manager and gratuities. Flights are extra. Departs: 2 October 2019.