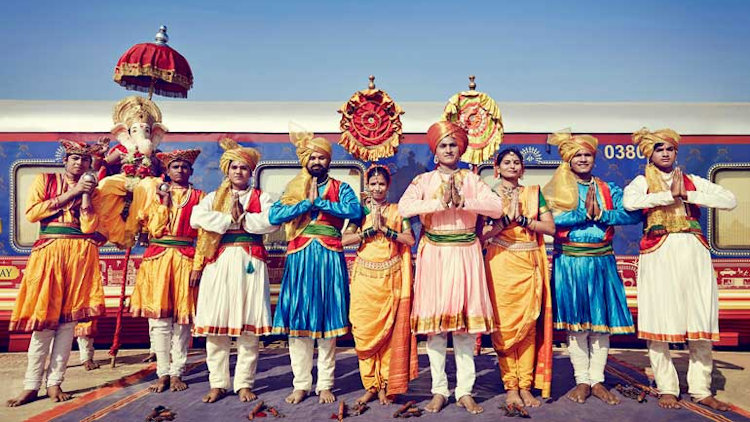 In 2019, Golden Eagle Luxury Trains is going big on India with two fabulous new rail adventures introduced aboard the gleaming Deccan Odyssey: one in the north and another in the south. The Madras Mail offers the opportunity to join Golden Eagle’s president and founder Tim Littler on a one-off President’s Tour in celebration of the company’s 30th anniversary, and covers the very best of southern India, from Mumbai to Hyderabad. The Darjeeling Mail travels coast to coast from Mumbai to Kolkata, taking in the hill plantations of Darjeeling, the bazaars of Delhi, the famous sites of Agra and spiritual Varanasi.

There is no better way to travel through India than by luxury train. Golden Eagle passengers are invited to settle into their beautifully-appointed en-suite cabin, to enjoy the convivial atmosphere of the stylish Bar Lounge Car and indulge in the fine dining offered in the onboard restaurant. This unique experience offers a real flavour of exotic India: from the train, gaze out of the windows to watch as the jaw-dropping scenery and spirit of India unfold, and disembark to witness the warm-heartedness of the people and the celebrated sites.

Discover a land of contrasts on this two-week rail odyssey across southern India, from vibrant cities to peaceful backwaters, and immaculate beaches to rolling foothills. Revealing a slower, peaceful and more exotic side of India, this special President’s Tour, in the company of Tim Littler, showcases India’s innumerable ancient monuments and spectacular World Heritage Sites.

After a stay at the five-star Taj Mahal Palace Hotel, join the luxury Deccan Odyssey as it weaves its way southwards to Kanyakumari in Kerala, mainland India's southernmost point. Highlights along the way include: the beaches and temples of Goa; a trip on the Nilgiri Mountain Railway, India’s only rack and pinion railway; and a Kathakali Dance performance in Cochin where elaborately made-up dancers, accompanied by drummers and musicians, act out a dance drama. Looping north towards the main cities of Tamil Nadu, passengers will witness an Aarti Ceremony in the Meenakshi-Sundareswarar Temple at Maduri, the landmarks of Pondicherry, and the colonial heritage of Chennai (Madras) on the Coromandel Coast. In Chennai, swap the Deccan Odyssey for a few nights at the beachfront Taj Fisherman’s Cove Resort, before continuing the journey by air to Hyderabad for a final spot of sightseeing to complete the adventure.

Price: from £11,795pp, including 7 nights’ Deluxe Class accommodation on the Deccan Odyssey, 7 nights’ hotel accommodation (2 in Mumbai, 3 in Chennai, 2 in Hyderabad), and all meals, wine, beer and soft drinks. Depart: 5 December 2019.

Unravel the colour, character and diversity of India over 14-nights, travelling from Mumbai to Kolkata on this fascinating new trip. Expect luxury all the way, with a two night stay at the iconic five-star Taj Mahal Palace Hotel to kick off the tour. The adventure then steps up a gear, when guests climb aboard the beautiful Deccan Odyssey, their hotel-on-wheels for the next week. Weaving eastwards across India, the first port of call is Udaipur to discover the city’s tapestry of lakes and palaces, before exploring the finest sites of Jaipur and Delhi. There is plenty of time devoted to the magnificent Agra Fort and Taj Mahal too, ahead of the train’s arrival in Varanasi. Situated on the banks of the River Ganges, this cultural centre is one of India’s most spiritual places, where Hindu pilgrims bathe in the sacred waters and perform funeral rites. Golden Eagle guests will have the privilege to witness these time-honoured ceremonies before departing for a private river cruise.

Taking leave of the Deccan Odyssey, continue on another spectacular rail passage to the hill station of Darjeeling, this time aboard the narrow-gauge Darjeeling Himalayan Railway’s ‘Toy Train’. With three nights here, learn about the colonial history of the town, visit a local tea plantation to sample the freshest cup of tea, and take an early morning trip up Tiger Hill to watch the sunrise over the snow-capped Himalayas. A flight to Kolkata signals this remarkable journey’s end, with the final days spent absorbing the sights and sounds of India’s former capital.

All prices are per person based on 2 sharing and additionally include a fully guided off-train excursions programme, porterage, arrival and departure airport transfers, the services of a Tour Manager and all gratuities. Upgrade to Presidential Class available.