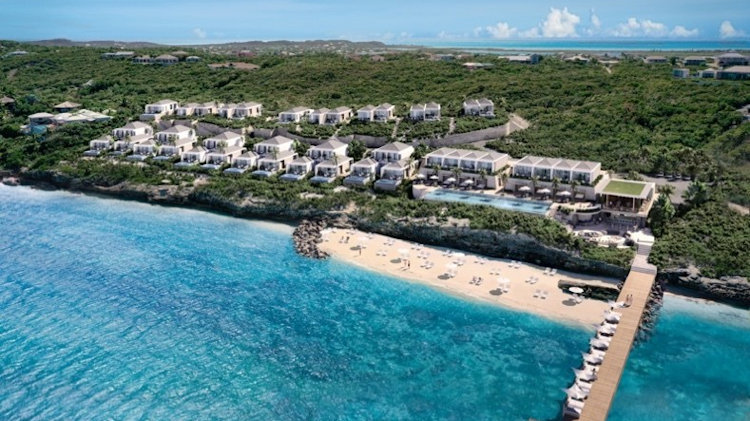 Grace Bay Resorts has announced an exclusive amenity at its newest luxury resort, Rock House, which will officially open in Turks and Caicos this December: The Beach Club at Rock House. As the first of its kind in Turks and Caicos and exclusive to owners and guests at the five-star resort, The Beach Club at Rock House will span 200 feet along the ocean and will offer world-class oceanfront dining and the high level of service Grace Bay Resorts is known for. The club will also include a 130-foot jetty stretching far into the ocean with elegant parasols and daybeds, reminiscent of beach clubs found on the Italian coast.

Rock House, the latest project from Grace Bay Resorts, will be a five-star residential resort nestled into the yet-to-be-developed cliffs of Providenciales’ north shore in Turks and Caicos. The project will feature a collection of luxury cottages that will capture the allure of hillside European towns like Capri, providing a private, cliff-side option for buyers coveting an alternative to the numerous beachfront resorts typically found in the Caribbean. Each home, crafted by Coast Architects with interiors by AD100 interior designer Shawn Henderson, will include private shower gardens, oversized soaking tubs, eclectic Scandinavian and custom-made furnishings and 180-degree views of the archipelago’s barrier reef and Atlantic Ocean. Amenities will include the one-of-a-kind, serviced Beach Club at Rock House, the largest infinity pool in Turks and Caicos, waterfront dining and wellness facilities including a spa and fitness center.