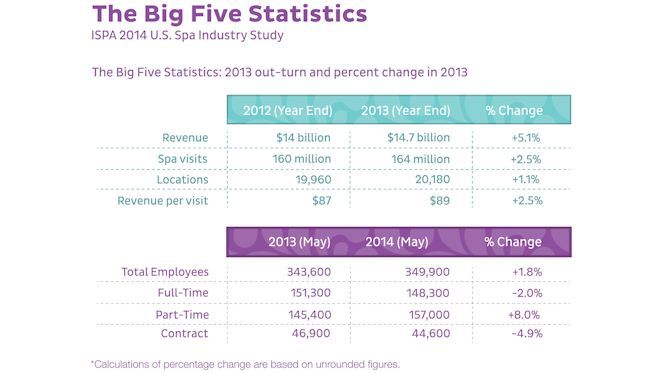 The total number of spa visits climbed to an all-time high in 2013, reaching 164 million (2.5 percent increase on the previous year). Combined with a 2.5 percent increase in total revenue per visit, total revenues generated by spas in 2013 rose to $14.7 billion, an increase of over five percent on the 2012 level. Nearly 350,000 individuals are employed by the spa industry nationwide, close to a two percent rise from the previous year.
ISPA President Lynne McNees commented on the positive growth saying, “We are excited to see a continued positive growth trajectory and a record-setting number of 164 million spa visits achieved in 2013. It's even more refreshing to hear that our members are also experiencing these trends within their spas.”
This year marks the 15th anniversary of the initial launch of the ISPA industry study in 1999. Since that time the size of the U.S. spa industry has soared from an estimated 4,140 spa establishments in 1999 to 20,180 in 2013.

“Over the past fifteen years, ISPA has captured the changing landscape of the spa industry through its annual industry study including the five-fold increase in the number of spas,” said McNees. “Today's consumer has greater access to spas and more choices than ever before.”

"What we are seeing with this year's study is the reflection of continued growth," said Colin McIlheney, PwC global research director. "With the key indicators, including total revenue and spa visits increasing, this study highlights the positive trend across the board in the industry. The respondents to the survey also expressed confidence that growth will continue in the coming months."

The complete study, funded by The International SPA Association Foundation and conducted by PricewaterhouseCoopers (PwC), will be released on September 30, 2014.