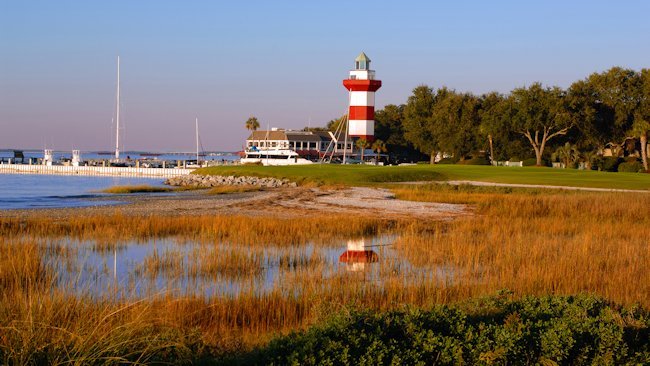 In 1969, Arnold Palmer, the game's reigning superstar at the time, did come to Hilton Head Island to play Pete Dye's novel new layout. Palmer staged one of his dramatic final-round charges to win the inaugural PGA TOUR event on Harbour Town as millions watched on television at home. The legacy of one of the game's most influential designs was launched.

If the adage “great courses identify great players” is true, then Harbour Town qualifies in spades. In addition to Palmer, the roster of past champions is off the charts impressive: Jack Nicklaus, Tom Watson, Johnny Miller, Hale Irwin, Nick Faldo, Bernard Langer, Payne Stewart, Greg Norman and David Love III have all donned the plaid tartan jacket awarded to the winner.

Praise for teeing it up on Harbour Town doesn't rest solely with players of Watson's vintage. The modern generation of TOUR stars rave about the layout as well. “I really love this course,” says Jordan Spieth, fresh off his historic Masters triumph.

2014 RBC Heritage winner Matt Kuchar says, “Harbour Town is special. Every hole stands out. Every year we get very excited to come back here.”

Just a bit north of 7,100 yards, it's not all about length says 11-time PGA TOUR winner Zach Johnson, "This venue is timeless, ageless. It surpasses the belief that you have to make it longer and bigger and better. If anything it feels like it's getting tighter and smaller. And it's still hard. It's just a great test.”

One need only play Harbour Town once to discover its uniqueness. Immediately noticeable are the grand oaks and magnolias draped with Spanish moss that intrude over the fairways and greens and swat away seemingly well-played shots. The putting surfaces are among the smallest on TOUR and are harder to hit than Sugar Ray Leonard in his prime. Sneaky water hazards turn Dye's cadre of par 3s into mini torture tests. It's all so devilishly fun.

Then there's the grandest of finales. The magnificent par-4 18th is as open as the rest of the course is tight. Sea vistas stretch to the horizon. The marshy shores of Calibogue Sound run along the entire left side of the stout 472-yard hole. The aiming point is the iconic red- and white-striped Harbour Town Lighthouse behind the elusive green that is even further protected by the winds off the water. Few holes are harder to birdie or par when a championship is on the line. Dye's masterpiece is a thrill.

Harbour Town is about to get a bit of touch up over the summer. Following this year's tournament, the course will close for four months. The tee-boxes, fairways and rough will be replaced with Celebration Bermuda grass, the most technologically-advanced surface used on warm season courses.

Additionally, Harbour Town's greens will be re-grassed with Tifeagle Ultra Dwarf Bermuda, the same grass that has been on the putting surfaces since 2001. A new state-of-the-art irrigation system will also be installed with the latest science in water management and control.

So come this fall, Harbour Town Golf Links will be even better. And yes, golfers, both professional and those wishing they were, will visit The Sea Pines Resort and play this classic course just like Arnie did back in 1969.

By the way, before trying to match wits with Dye on Harbour Town, a good plan of attack is to get your game in shape at the resort's Golf Learning Center at its splendid Plantation Golf Club. The 23,000-square-foot clubhouse serves its Heron Point and Ocean Course. Tim Cooke, Director of Instruction and the Carolina PGA Section's “Teacher of the Year,” and his staff are first-rate and will get your game honed for what lays ahead on one of the world's best places to play.