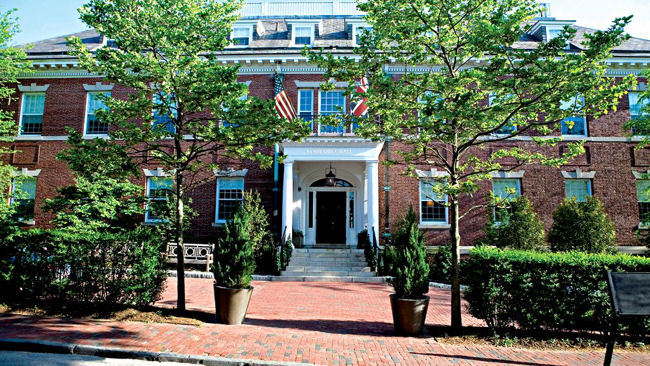 Washington School House, built as one of the three original schools in Park City, Utah, the school was named for George Washington. Yes, of the cherry tree fame. Though close to going up in flames in Park City’s Great Fire of 1898, the hammered limestone façade of the schoolhouse survived. So did the name. After the stock market crash of 1929, enrollment declined and the schoolhouse was sold in 1936 to the Veterans of Foreign Wars. It was used for dances and social events until the 1950s. In 1984 the building was purchased and renovated into a bed and breakfast, The Washington School Inn, which served its visitors and community well until a new idea for the iconic landmark took hold. On completion of a total interior renovation (think gutted to the studs), this fabulously preserved 1889, limestone gem reopened in December 2011. In 1889, the editor of the local paper, The Park Record, wrote that the school building was “one of the finest in the territory.” He was delighted that, “elegant furniture is being installed.” Washington School House, he said, “will lack for nothing.” The hotel is happy to report that well over a century later, this property is still one of the finest in the territory. And elegant furniture is installed - it lacks for nothing.

Casa Madrona Hotel & Spa is just announcing their renovation of their 9,000 square foot historic William Barrett Mansion, located atop the property on the hillside overlooking the Richardson Bay and the San Francisco skyline. This will be the ultimate exclusive suite experience that will include ultra-sophisticated technology, a private butler and is designed be a world-class design team.

Built in 1885 and listed on the National Register of Historic Places, the former mansion was originally designed as a private residence for William Barrett, Secretary-¬-Treasurer for the San Francisco Gas and Electric Company. In 1906, Barrett sold his home to attorney John Patrick Gallagher -¬- who converted it into the original Casa Madrona Hotel. For nearly 40 years, it was a very successful San Francisco bed and breakfast.

In the early 1940s, the Gallaghers sold Casa Madrona, and during World War II, the property was used as temporary lodging for military families in transit. After the war, however, it fell into disrepair, and became a "crash pad" for city's burgeoning "beatnik." But salvation came in the form of the French Deschamps family who immigrated to California in 1959 and began extensive renovations. The Deschamps also opened Le Vivoir Restaurant onsite. The eatery instantly garnered critical and commercial praise and drew celebrities such as Dick Van Dyke, Carol Burnett, Warren Beatty, and the rock band Pink Floyd.

Vanderbilt Grace (pictured at top), originally built by Alfred Gwynne Vanderbilt in 1909, is a vintage Newport mansion that has been restored to its former glory to comprise of 33 rooms and suites, two restaurants and indoor and outdoor pools. The property is one of the few private homes of the era to operate for guests as a fully functioning hotel in Rhode Island and lies just minutes from Newport's waterfront.

The Chanler at Cliff Walk in Newport, Rhode Island is a historic building from Newport's Gilded Age. It was the summer home for New York Congressman John Winthrop Chanler and his wife Margaret Astor Ward, who purchased the land, John Easton Farm, which was a working farm that had barn structures on it. The house known as "Cliff Lawn" was completed in 1873. It was the first mansion to be built on the famed Cliff Walk and has hosted numerous dignitaries including the poet Henry Wadsworth Longfellow and President Theodore Roosevelt. It changed hands several times and in the 1940's was a tenement house for the Navy. It became the Cliff Walk Manor in 1950 and remained with the same family until the Shufelt family purchased in 2000 and turned it into a luxury hotel. History is manifest in the hotel’s twenty rooms - each reflecting a different sophisticated historic theme and appointed with authentic furnishings, art and décor.

The Liberty Hotel in Boston was once the iconic Charles Street Jail and is now the stunning, vibrant Liberty Boston Hotel. Since opening in September 2007, the Boston luxury hotel quickly became the “must-visit” downtown Boston destination for visitors and local residents alike.

The trend continues with Trump's development of The Old Post Office, Washington D.C. Trump International Hotel, Washington, D.C. will be, when completed, one of the finest hotels anywhere in the world. The building itself, which is totally irreplaceable, is going to be brought back to far beyond its original grandeur. People of this country will be particularly proud of the new ballroom – it will be large and magnificent. With carefully articulated luxury features and amenities, an unrivaled location on ‘America’s Main Street’ and iconic architectural character, it will be unlike any other hotel in the market today.
Like Us
Facebook
Follow Us
Twitter
Follow us
Instagram