History of Caravelle Hotel Saigon to be Published 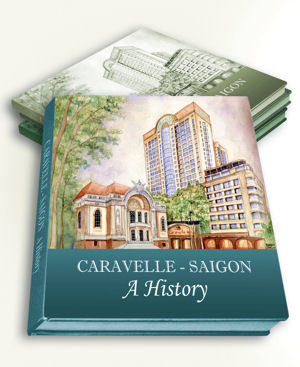 The book – a year in the making by a team of writers and researchers – unfolds as a straight narrative interspersed with fascinating stories from the diverse individuals whose lives have intersected with the Caravelle.

While the book's most compelling sections detail the tumult of the 1960s and early 1970s, the book provides a fascinating glimpse into the development of the hospitality industry in Saigon and concludes with the hotel’s extensive refurbishment in 1998.

"The Caravelle's history makes it part of the fabric of Ho Chi Minh City and Vietnam in a way that very few hotels, anywhere, can be," said John Gardner, General Manager. "It's not 'just' a five-star hotel, it's something of a 'character' in the story of modern Vietnam's development."

Designed and built to be the country’s most upscale hotel when opened in 1959, the Caravelle almost immediately became a focal point of world attention for the next turbulent decade-and-a-half.

The hotel thus became inseparable from both the journalistic luminaries who covered the Vietnam War and a new, progressive brand of war correspondence. In the process, it also became a monument to the valor of the Vietnamese people.

As Saigon's unofficial press club, the Caravelle was frequented by policy makers and such media icons as David Halberstam, Peter Arnett, Morley Safer, Neil Sheehan and Walter Cronkite. CBS News and ABC News had bureaus in the hotel, as did The New York Times during the early years of the war.

And there was intrigue aplenty, as reporters watched from the rooftop bar as the city's outskirts were shelled, or Barry Goldwater harangued against the war's "negative" coverage by the foreign press.

Still in production, the book will be published at 114 pages and feature a compelling collection of images.