The Most Important Archeological Site in Sardinia 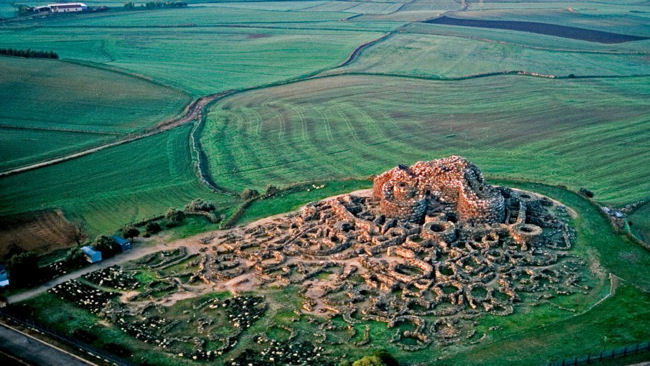 Barumini is the name of the village where it is located in the central-south region of Sardinia.

Known as UNESCO World Heritage Site, “Su Nuraxi di Barumini” is the most complete nuragic site and at the same time it features an innovative and creative use of materials and techniques that were available to the prehistoric community.

The village of Barumini with its nuraghe “Su Nuraxi” shows that this territory has been inhabited since the Bronze Age (from 2300 to 700 B.C.).

The nuraghes used to serve as defensive turrets with the shape of a cone trunk, made by large dry stones, and equipped with internal rooms. The nuraghe in the village of Barumini is fenced in and surrounded by smaller towers interconnected by massive walls.

The village was composed by small circular houses, located around these main buildings. Besides, it is possible to find other spaces destined to specific domestic or ritual activities. The huts of the nuragic village date back to the VII-VI centuries B.C., when the territory was under the Punic and Roman rule.

Instead, the external wall curtain is even more ancient and implies the establishment of other populations during the Iron Age (between the ninth and the eighth century B.C.). This curtain is itself an adjustment to a front wall (i.e. a wall of first defense) incorporating the oldest part of the village which dates back to the Bronze Age, between the centuries XI and X B.C..

The peculiarity of Barumini is that you can visit not only a simple watchtower, even if particularly ancient, but you can also take a stroll through the remains of an entire village dating back to thousands of years ago.

The excavations carried out in 2015 have brought to light the foundations of one of the huts that was previously unknown along with the remains of sacrifices and rites involving the killing of animals. In particular, the bones of two small pigs were uncovered together with mussels’ valves, goats’ remains, pottery and charcoal fragments.

Barumini’s site is known throughout the world thanks to the excavations carried out in the 1950s by Giovanni Lilliu, an internationally renowned archaeologist who has discovered the nuragic site. These excavations have brought to the forefront the extraordinary nuragic civilization of the Mediterranean.

For those staying at villa Fenice in Villasimius, Barumini is 110 km far (about 1 hour 50 minutes).

You will find more information on the accommodation in Sardinia here:
http://www.homeinitaly.com/luxury-villas-sardinia.php