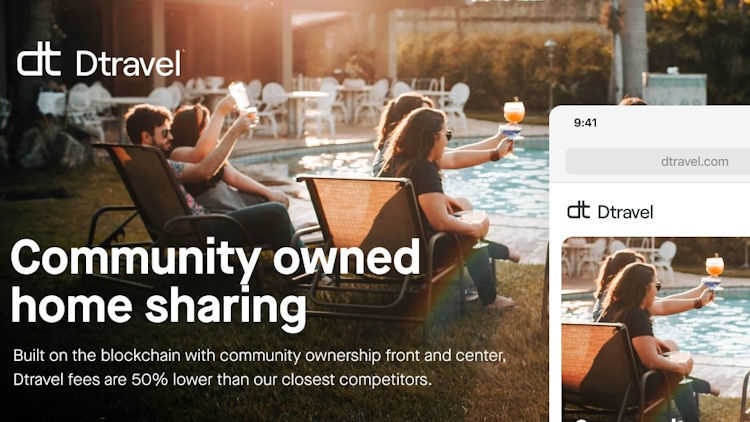 Dtravel.com — the decentralized platform for the home sharing economy introduced last month by former executives from Airbnb, Expedia, and other travel technology companies with support from Binance-backed Travala.com — announced today that over 200,000 properties in more than 2,000 cities have joined the platform since its launch.

With a goal of listing over one million vacation rentals within its first 12 months, Dtravel is acquiring hosts at a rate 120 times faster than Airbnb, which took 2.5 years to reach 50,000 properties listed. Dtravel’s swift milestone of 200,000 properties in its first 30 days has been achieved through a combination of individual hosts listing their properties on the platform and strategic partnerships with large property managers like Ministry of Villas and In Residence. More partnerships are being finalized and will be announced soon.

Introduced last month, the Dtravel platform is expected to launch property bookings in the next three months, offering hundreds of thousands of vacation rentals powered by its native token (TRVL) — coming soon to Binance Smart Chain and the Ethereum Network — which is held by all hosts. TRVL can be used for booking stays, qualifying for rewards and loyalty programs, participating in platform governance, and more.

Key contributors to Dtravel were announced this month. Contributors primarily work on Dtravel through Genesys Partners. There are already over 30 people contributing to Dtravel, with plans to expand the team to over 100 by the end of the year according to Drew Currah, Finance Lead at Dtravel.

Governed entirely by its community through the Dtravel Decentralized Autonomous Organization (DAO) and leveraging DeFi blockchain technology to facilitate smart contracts, Dtravel repairs the broken relationship between hosts and guests created by existing centralized platforms to deliver the world’s first true sharing economy. A DAO is akin to a digital cooperative where holders of a certain token are members and decision makers. All hosts get the benefit of having Dtravel tokens (TRVL) and paying 0% fees per booking.

To learn more and become a host, please visit Dtravel.com