Hotel Bars That Transport You to Another Time and Place 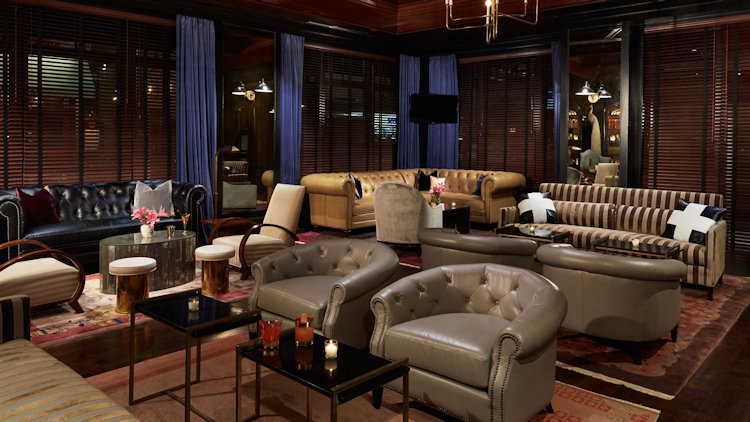 Nostalgia is a powerful cultural force that is en vogue again as consumers seek shared experiences. Catering to this trend, hotels around the U.S. are providing travelers with bar experiences that transport them back in time:

The Bar at The Spectator Hotel, Charleston: (pictured) Emanating the exuberance of a 1920s speakeasy, guests are taken back to the Prohibition-era through vibrant interiors, sophisticated ambiance and a menu featuring hand-crafted specialty cocktails and southern-inspired light bites.

Quill, Washington, DC: Set in DC’s intimate The Jefferson hotel, this bar hearkens back to the era of Sinatra and Davis Jr. with creative libations accompanied by classic, Washingtonian interiors and DC’s Piano Man performing jazz five nights a week.

RUMba bar at Casa Marina, Key West: Paying tribute to the history of rum running that thrived in the Florida Keys, the intimate, seven-seat RUMba bar at Key West’s Casa Marina is located in the resort’s historic grand lobby and features the most expensive collection of rum in Key West and free tastings every afternoon.

Also at Casa Marina, the recently-opened HMF Sidecar – named after Henry Morrison Flagler, the railroad tycoon behind Casa Marina’s conception in 1920 – is located in the hotel’s grandiose lobby. The menu features inventive twists on classic cocktails along with detailed historical facts about the history of the resort and Henry Morrison Flagler himself.

1833 Kitchen & Bar, Inns of Aurora, Aurora, NY: At 1833 Kitchen & Bar, guests can step back to – you guessed it – 1833, a name which honors the year of establishment. Originally named Aurora House, the Aurora Inn at the Inns of Aurora (a lakeside luxury boutique resort in the Finger Lakes) was built in 1833 by Colonel E.B. Morgan, an original investor in the New York Times. During the mid-19th century, Aurora and the Inns of Aurora became a major stop along the Erie Canal for boats carrying agricultural products from area farmers to NYC. Today, guests will notice artwork highlighting former innkeepers and inn-leaders while dining on the sustainably- and regionally-sourced cuisine prepared by Executive Chef Eric Lamphere.

Workshop Lounge at The Foundry Hotel, Asheville, NC: Housed in the lobby of Asheville’s former steel foundry turned luxury boutique hotel, guests are transported back to the 20th century with a menu of artisanal craft cocktails made with organic, locally-distilled spirits and local orchestra performances on a nightly basis.

Marchand’s at The Vinoy Renaissance St. Petersburg Resort & Golf Club, St. Petersburg, FL: Guests can saddle up to the sophisticated bar at Marchand’s, which opened in 1925, to experience Florida’s old world glamour in a beautifully restored room with original hand-painted Italian-themed murals adorning the walls.

The Escadrille Bar at Le Fouquet’s, Paris, France: The legendary Le Fouquet’s Brasserie—a French cinematic hotspot that has welcomed iconic guests over the years (Quentin Tarantino, George Clooney and Gene Kelly, to name a few)—celebrates its 120th anniversary this fall. Connected to the historic brassiere is L'Escadrille Bar, which transports guests back to the golden age of film and flight, with images of the world’s greatest aviators adorning the bar walls and stunning celebrity portraits hanging in the restaurant. A glass case of engraved silver napkin rings highlights the brasserie’s most prevalent (and current) movie star regulars (among them—Bruce Willis, Jack Nicholson and Liza Minnelli).

Located on its own private island about 20 minutes from St. Mark’s Square, JW Marriott Venice Resort & Spa is an escape from the bustling city of Venice. The new Taittinger Champagne Lounge provides guests a secluded outdoor space perfect for a romantic evening surrounded by the Venice skyline. Guests can sip on a refreshing glass (or glasses) of one of the signature Taittinger champagnes partnered by delicious canapés. Open daily from 6 p.m.—8 p.m., the Champagne Lounge is the place to sit back, relax and take in the breathtaking Venice sunsets.