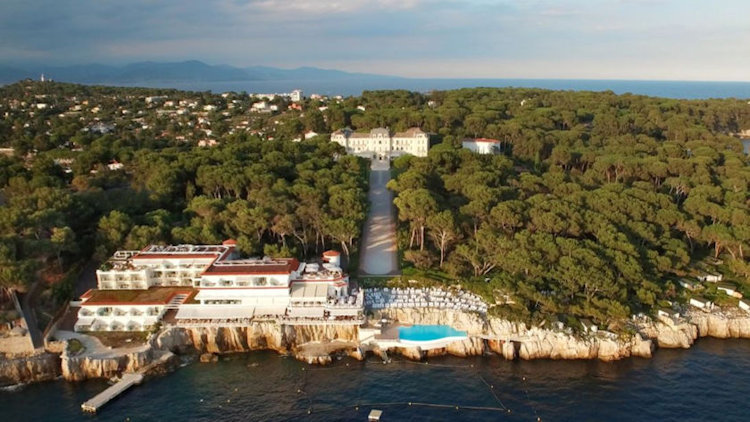 On the 150th anniversary of its opening, the most glamorous hotel property of the French Riviera reopens with fully refurbished areas by acclaimed Brazilian Architect Patricia Anastassiadis.

This year marks the 150th Anniversary of legendary Hotel du Cap-Eden-Roc in Cap d’Antibes, Oetker Collection masterpiece. Throughout the years, the hotel has been the preferred location of dazzling parties, important dinners and alluring fashion shows. It is set in the most iconic area of the French Riviera and renowned for its notable guests. Originally completed in 1870 by Alexis de Pletscheyeff, former captain of the Hussards of the Russian Imperial Guard, the Grand Hotel du Cap was built as a retreat for intellectuals in an exceptional location favored by Hyppolite de Villemessant, Founder of Le Figaro. The official inauguration took place on 26th February 1870. The property has since opened its doors to world-renowned personalities. Novelist F. Scott Fitzgerald, writers Ernest Hemingway and Gertrude Stein but also painters as Pablo Picasso and Chagall as well as an incredible roster of historical figures of the 20th Century have set foot on the Napoleon III style building.

This legendary place has evolved carrying stories, memories and anecdotes of the personalities that visited throughout the decades. With this in mind, Patricia Anastassiadis has been commissioned to come up with a design concept for the three main dining areas including the piano-bar La Rotonde, the Eden-Roc Restaurant for lunch, the Louroc restaurant for dinner and the Eden-Roc Grill, that would respect the history of the hotel property. Anastassiadis’ primary focus was to provide a fresh and contemporary look for the dining areas by creating a continuation in the dialogue started by previous architects and interior designers. Each one of them have left an indelible mark within the property which is still visible so many years later.

“The shades of blue and green that respectively recall the color of the ocean and the flora of the French Riviera are imprinted in my memories ever since my childhood. Together with my family I have visited a destination in the French coast near the Hotel du Cap-Eden-Roc because my uncle used to live not far from Cap d’Antibes. Therefore, for me, this project is all about memory and its many layers. It is a tribute to the intellectual abundance of the hotel’s history that is as representative as the architecture of the building itself. With this project, we are developing the archeology of today by digging into the recollections of a vivid past that is still present in every single corner of the property. For the new design of La Rotonde, we have been inspired by the original oval-shaped room and therefore selected curved and sinuous pieces of furniture to highlight that there are no sharp angles in nature. We wanted to create an organic flow in the passage from the bar to the outside areas by playing with shapes, textures, and colors, especially with those green tones inspired by the path towards the sea.

The Eden-Roc Restaurant is set in an idyllic area, facing the grandeur of the Mediterranean and the Lérins Islands. We were inspired by the idea of rocks meeting the sea. This restaurant brings out the reminiscences of the hotel’s historic rendez-vous. Many notable guests sat at these tables as it has been the place of legendary encounters. Our project does not erase the past but acknowledges it and explores it further. We have maintained the original arches as a nod to the tradition but proposed a refreshed look which has been achieved with the introduction of contemporary bespoke furniture realized especially for this project. We have also created a color palette that showcases the ocean blue and coral tones – this last one in particular would reflect the colors of sunset that represent the beauty of the passing of time.

Finally, the Eden-Roc Grill features nautical tones (blue and red) that are a classical reference to the style of the French Riviera. The dining areas of the Grill are connected through the pool and welcome a breezy and buoyant atmosphere while keeping the natural elegance of the location - one of the aspects that fascinate me the most about this project. It has been an honor for me to be invited to contribute to such an important milestone in the history of the hotel’s design and architecture and truly enchanting to work on a project that provides us with affectionate stories that still resonate within the property. I took time during my many visits to Cap d’Antibes to listen to its sound, enjoy the silence and sink in its essence. Our redesigned areas are nothing but a conversation between past and present in this place with remarkable heritage.”

To celebrate this exceptional milestone, the Hotel du Cap-Eden-Roc has decided to offer a new dimension to the gastronomic experience in its different restaurants and bars matching with the new design implemented by Patricia Anastassiadis. The Executive Chef, Arnaud Poëtte, the newly appointed Chef, Sébastien Broda, and the Pastry Chef, Lilian Bonnefoi, will now be advised by Eric Frechon, three Michelin starred Chef at Le Bristol Paris. They all together will mobilize their talent to infuse the restaurants with an added touch of elegance and creativity. It is not a revolution, but all together it is a delicious evolution to discover upon the season’s opening next April 17th, 2020.