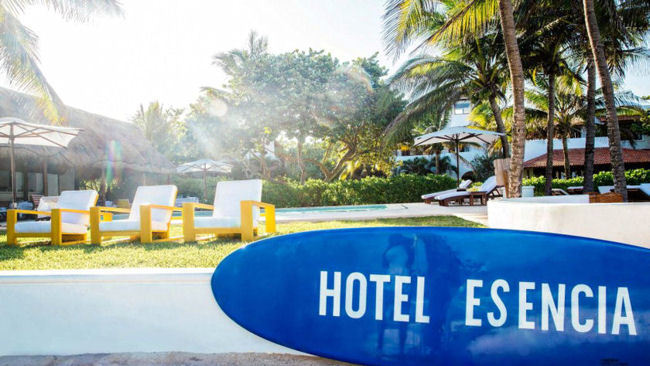 11 spacious new luxury suites will make their debut this October, including six beach suites directly on the sand with unobstructed sea views, and five jungle suites less than 25 metres from the sea. Xpu Ha beach is widely considered to be the most beautiful stretch of Mexico’s Caribbean coast.

This important expansion will include the launch of a spectacular new destination restaurant from acclaimed international Chef Dimitris Katrivesis under a towering beach front palapa.

The new suites and restaurant, along with a new reading library and hammock garden, will no doubt enhance Hotel Esencia’s growing reputation as the finest luxury boutique hotel on the Riviera Maya.

HISTORY
Art and architecture meet the beach at this chic aristocratic boutique hotel, which was originally built as the private hideaway home of an Italian duchess. It was converted into a hotel in 2005 and in 2014, began a new journey when award-winning entrepreneur and art collector Kevin Wendle became its owner. Wendle completed a major refurbishment programme in 2015, refreshing all 29 bedrooms and suites and introducing a one-off collection of art and antiques, including traditional mid-century furnishings and authentic 1950s works of art.

The 11 new suites arriving in October will bring the total number of rooms and suites to 40, however the grounds of the hotel will be effectively doubled with this expansion preserving the intimate, extremely low-density occupancy that Hotel Esencia is known for. The new suites and restaurant will enhance the hotel’s facilities and feature all the beloved elements of Hotel Esencia’s original design, but with improvements in comfort, décor and technology.

NEW ROOMS AND SUITES
The 11 spacious and stylish new suites will include six Beach Suites, each located with direct access and views of Xpu-Ha, one of the most protected and quietest white sand beaches in Mexico where sea turtles make their nest each year.

These white-washed suites will be light and airy with windows on three sides and floor to ceiling doors which open onto a beach front terrace with sweeping views of the ocean. These luxurious king bedrooms will also feature an in-room double bathtub for two positioned to enjoy the view of the sea, custom furnishings and artworks by local Mexican artisans, custom fabrics, a collection of art and design books, all the latest technology including lightning fast wifi, in-room sound and smart TV systems, and a spacious double sink bathroom and shower with full sea views as well. Five Jungle Suites will be similar in size and will overlook the hotel’s luxuriant gardens.

NEW RESTAURANT AND TERRACE
The hotel will also welcome a new destination restaurant and terrace which will be open to the general public as well as hotel guests. The circular restaurant will sit under a towering thatched palapa and will offer 180° views of the ocean, with whitewashed wood floors, and direct access to the beach. The restaurant’s décor will have a personality all its own and the terrace will allow guests to dine facing the beach.

The new restaurant will be overseen by one of the world’s most exciting and influential chefs Dimitris Katrivesis, who will bring his Greek and Spanish heritage to infuse traditional flavors and seasonal ingredients with a contemporary twist.

Chef Dimitris, an alumnus of the acclaimed Michelin starred El Bulli restaurant in Spain, and the chef behind Mistura in Mykonos, La Pantera Negra in Athens, and Anahi in Paris, will bring Tropical Peruvian style cooking to Xpu-Ha featuring a clever fusion of Peruvian and Japanese flavors together with the best ingredients of Mexico’s Yucatan peninsula.

HOTEL ESENCIA
Located just 50 minutes from Cancun and 30 minutes from Tulum, Hotel Esencia is full of character, charm and heritage. The Main House is the centerpiece of the hotel around which footpaths lead to the 29 existing suites and villas. There are also two restaurants, a new beach bar, two large pools, a cold-pressed juice bar and organic spa. Each room and suite boasts a private terrace and seating area with views of either the luxuriant gardens or the Caribbean Sea.