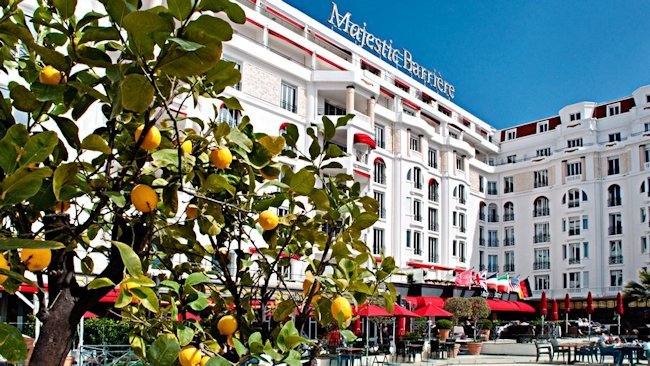 Iconic design house Christian Dior will set up a pop-up showroom in its namesake suite at the property, offering film stars a selection of couture gowns to wear to on the red carpet. The hotel’s most prestigious suite, the Majestic Penthouse, with its famous rooftop terrace and swimming pool, will be occupied by Kering, the Festival’s new official partner.

The hotel has not yet announced which celebrities will be staying in the prestigious new Melodie Suite, launching at the Festival this year. The Suite pays homage to the classic French film, Melodie en Sou-sol “Any Number Can Win” starring Jean Gacin and Alain Delon, which was filmed at the Majestic.

This palatial property at 10 La Croisette will also host the traditional jury cocktails on May 13 as well as a closing event on the last evening of the festival, graced by winners of the Palme d’Or and other prizes. A new photography exhibit, “Backstage at Cannes” created by artist Paris Match debuts at the festival and offers an intimate insight into stars and their entourages from the 1960’s through present day. Celebrities will head to the Majestic for numerous cocktail and evening events, including a Taiwanese film night and a Chinese cinema night. Princess Ubolratana and Princess Rajakanya will be attendance at the party. Additionally, there will be Mexican, Belgian and German evening celebrations with charity galas attended by the festival’s elite.

Three members of the jury, Sophie Marceau, Jake Gyllenhaal and Guillermo Del Toro, will be staying at the Majestic. Isabella Rosellini, President of the “Un Certain Regard” jury will also be staying in addition to Ian Somerhalder, the new face of Clarins. Catherine Deveuve, a regular festival visitor, will be one of the hotel’s esteemed guests as well. The hotel’s Spa Diane Barrière by Clarins will provide make-up treatments for nearly 700 celebrities and guests during the course of the Festival.

For the first time, the hotel will host a screening on the beach with 200,000 cinema fans, 35,000 film industry professionals and 4,000 journalists expected to be in attendance. On May 21, the famous apres-ski disco at La Folie Douce will host a night of fine dining and cabaret on the Majestic’s beach. Additional partnerships with Fashion TV will bring color and excitement to the Majestic over the course of this two-week event.