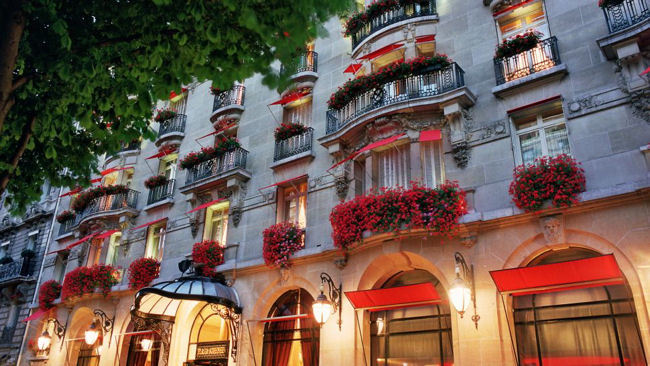 Since then, the Dorchester Collection address has become one of the most iconic symbols of traditional French hospitality and Parisian glamour and will now celebrate its 100th Anniversary in 2013. Exclusive partnerships, thematic offerings, fashionable cocktails, cuisine and more will be available throughout the year, in order for guests to have the exceptional opportunity to celebrate with the legendary hotel in style.

• Experience Exclusive Shows at Théâtre des Champs-Elysées - There is more than one address on Avenue Montaigne celebrating its centennial this year. Home to the Orchestre National de France and the Vienna Philharmonic Orchestra, the iconic Théâtre des Champs-Elysées, located just steps from Plaza Athénée, is also turning 100. The Théâtre, renowned for its eclectic programming and historical impact, has remained famous for being the world premiere site of Igor Stravinsky's The Rite of Spring when it first opened in 1913, a ballet performed by Diaghilev's Ballets Russia. Joining Hôtel Plaza Athénée to mark the occasion, guests of the hotel will have the exclusive opportunity to see the already sold-out choreographic interpretations of the original show, with performances held on May 30 & 31, June 6 & 7, and June 25 & 26. "The Rite of Spring" package includes: one night in a junior suite deluxe or superior suite with VIP welcome; American breakfasts; two box tickets for The Rite of Spring at Théâtre des Champs-Elysées, with a cocktail in a private lounge during intermission; and supper for two at Le Relais Plaza. From 2,900€ (approximately $3,923 USD) in a junior suite deluxe, 3,365€ (approximately $4,549 USD) in a superior suite.

• Toast with New Baccarat Crystal Cocktail - Toast the centennial with the new "Cocktail Harcourt Baccarat" libation created by legendary bar manager Thierry Hernandez which will be available all year-round at Le Bar du Plaza Athénée, as well as Baccarat B Bars in Japan. In the hotel's signature red color and served in a Baccarat Harcourt crystal glass, the new cocktail combines a mix of red fruit: blackberries, wild strawberries and cranberries over a foundation of Cognac, spiked with a dash of passion fruit and topped with champagne. Cocktail priced at 28€ (approximately $38 USD).

• Celebrate Bavarian Evenings at Le Relais - Honoring the original founder of Plaza Athénée Emile Armbruster who originally hailed from Germany, guests will have the opportunity to learn more about the property's storied history and founder during three Bavarian evenings on February 21, 22 and 23. Werner Küchler, restaurant manager of Le Relais who also hails from Germany, helped inspire the menu of Bavarian specialties such as beer-lacquered pork hock, cabbage and potato quenelles and farm duck with cabbage and potato quenelles served with cooking liquor. The restaurant will be decorated in the colors of Bavaria, complete with traditional folk music and wait staff dressed for the occasion in Lederhosen. 95€ per person, excluding drinks (approximately $128 USD). In addition, Werner will host guests at a historic cruise-themed party in June. Le Relais was designed to be a replica of the dining room on board the famous French ocean liner, Normandie!, which made numerous voyages between France and the U.S. in the 1930's.

• Visit Thematic Hotel Events in 2013 - Celebrate year-round with a number of events at Plaza Athénée, including: Starting in February, all restaurants will feature a dish specially created for the occasion such as truffle and guinea fowl pate at Alain Ducasse au Plaza Athénée and calf's head with spicy tomato sauce and macaire potatoes at Le Relais; April 20, an event to commemorate the opening of the hotel in the Courtyard Garden complete with a large anniversary cake; and more. Details of future events will be available closer to the date.

Continuing to preserve and celebrate history, Plaza Athénée will also plant 100 trees on the grounds of Versailles in spring 2013 and will create a time capsule buried at the hotel, containing Plaza Athénée items dating from 1913 and today that represent the hotel. The property's most loyal guests and Facebook fans will be able to submit ideas via social media channels, which will be announced later this year.

Since Plaza Athénée's opening in April 1913, the Dorchester Collection address ushered in the Vanderbilts, the Rockefellers, Jacqueline Kennedy and celebrity bright lights such as Maurice Chevalier, Josephine Baker, Grace Kelly and more recently famous celebrities including Sarah Jessica Parker. Christian Dior first set up his couture salon, simply to be near the Plaza Athénée, and Chanel, Nina Ricci and Louis Vuitton have all followed his lead. Today, the Avenue Montaigne is a byword for luxury and haute couture, and the Plaza Athénée has become a legend.