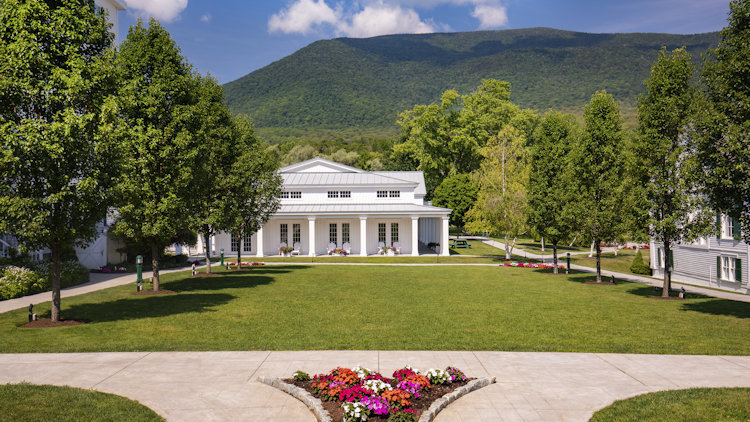 These hotels have strong Presidential ties… one was even owned by the Lincoln family!

Tucked in the Green Mountains of Vermont, The Equinox – celebrating its 250th anniversary this year – has been a vacation destination for four different U.S. presidents and one vice president: Presidents William Howard Taft, Ulysses S. Grant, Theodore Roosevelt (who gave a campaign speech on the front lawn), Benjamin Harrison, and Vice President James S. Sherman.

President Abraham Lincoln’s wife visited The Equinox with her two sons during the summer of 1864 and made reservations to visit again the following year with the President. A special suite was constructed in anticipation of the President’s visit, but he was assassinated on April 14, 1865. The 1811 House, part of The Equinox’s collection of historic inns, was the home of Abraham Lincoln’s granddaughter, Mary Lincoln Isham, who bought the property following Lincoln’s assassination.

The Equinox offers 147 guest rooms at the main resort and 43 Inns at The Equinox, along with five dining venues, full-service spa, activities from dog sledding to cross country skiing, and more.

Known as Dallas’ first luxury hotel, the “Grande Dame of Downtown Dallas” has personified Texas hospitality since Adolphus Busch built the now 407-room property on  the original site of City Hall more than a century ago (with the goal to have central beer distribution!). Illustrious guests since have included Presidents Jimmy Carter, Ronald Reagan and George H.W. Bush, along with first ladies Rosalyn Carter and Barbara Bush. Buckingham Palace also chose The Adolphus for the official state visit of Queen Elizabeth II and Prince Philip to Dallas in 1991. Queen Elizabeth gave the hotel an official portrait to be hung in the lobby.

The Adolphus offers a destination spa, Barber Shop, rooftop pool, five F&B outlets including the celebratory French Room experience, and unique programming such as the Salon series which is an evening of libations and conversation between the hotel’s art curator, local Texas artists and guests.

The emerging town of Long Branch, NJ was declared the nation’s “Summer Capital” in 1869 by President Ulysses S. Grant and is also home to Seven Presidents Park named after presidents Rutherford B. Hayes, James A. Garfield, Chester A. Arthur, Benjamin Harrison, Ulysses S. Grant, William McKinley, and Woodrow Wilson, all of whom spent time in the area's resorts. Pier Village, the rapidly expanding boardwalk community of which the 24-room beach boutique hotel Bungalow is a part of, is rich with entertainment, food & drink, shopping and gorgeous views year-round.

Built in 1926, initially to house the party guests of the famed Newport Mansion parties, the historic 208-room hotel sits atop Newport’s charming Historic Hill neighborhood offering views to the marina a 10-minute walk away. Notable guests have included President John F. Kennedy, Ella Fitzgerald, the Astors and the Vanderbilts.

In addition to an ideal location, the hotel offers One Bellevue restaurant, a destination SpaFjor, a rooftop bar open seasonally, and new for this year a coffee shop and café slated to open this spring.

Fondly referred to as “The Gem of West Texas,” the historic 1930s-era hotel was recently restored to its original elegance, with stylish details that evoke the charm, craftsmanship and architectural details of an earlier era. Hotel Settles offers 65 guestrooms, an expansive grand ballroom, a pool, fitness center and two dining and drinking establishments – Settles Grill and Pharmacy Bar & Parlor. The boutique property has provided secluded luxury and true Texas hospitality for past Presidents Herbert Hoover and Lyndon Johnson.

The Don CeSar celebrated 90 years in 2018. Opened at the height of the Great Gatsby era in 1928, The Don CeSar is known as Florida’s iconic “Pink Palace,” reminiscent of a Mediterranean-style castle with its majestic pink exterior, historic grandeur and striking architectural design elements set upon the white sand beaches of the Gulf of Mexico in St. Pete Beach. The 277 room hotel is a AAA Four Diamond property, National Historic Landmark and member of the Historic Hotels of America.