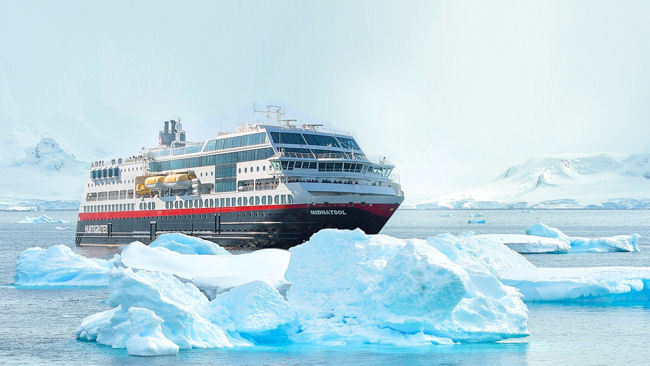 The Chilean fjords, Cape Horn, Strait of Magellan and Antarctica are only some of the highlights of MS Midnatsol's amazing itineraries when she, in September 2016, set sail from Punta Arenas in Chilean Patagonia.

MS Midnatsol (2003) will have up to 500 guests on board. An internationally composed, highly experienced expedition team will ensure a varied and exciting content to the voyage, both on board and during landings and excursions throughout the adventure.

Hiking on glacier ice thousands of years old, walking among penguins, kayaking between seals and snorkeling in Antarctica's ice water are just some of the experiences that will be offered during these voyages.

The itineraries for MS Midnatsol in Antarctica are adjusted to seasonal variations and follow the wildlife in the area, the ice conditions and the local cultural history. Through the choice of itinerary, landing sites and popular scientific lectures on board, guests will experience and explore this continent that has had such a lasting attraction on the world's polar explorers and scientists.

Hurtigruten will further refine the product for the existing 200 berth explorer vessel MS Fram. The ship's crew will, based on Ushuaia Argentina as turnaround port, seek new sites and destinations in Antarctica, inaccessible to larger groups. The guest's nature experiences will become even more challenging and extreme, through following the footsteps of the great explorers by skiing on glaciers, expedition camping among the penguins and kayaking in the habitat of seals and whales. MS Fram and MS Midnatsol will complement each other optimally.

We are creating a more activity based Antarctica product with MS Fram, sailing to places we haven't been before. At the same time we can promise that the guests on MS Midnatsol will experience highlights they will never forget. Guests will experience spectacular nature with massive icebergs, towering glaciers and abundant wildlife.

The MS Midnatsol offers a total of 16 departures from September 2016 to April 2017, 10 of these in Antarctica. MS Fram will in the same period do nine sailings in Antarctica.

Close to 28,000 tourists traveled to Antarctica in the 2013/2014 season, and the market for active nature-based adventures to exotic destinations are showing a significant growth. Hurtigruten now consolidates its position as the world's leading operator in sustainable travel in the Arctic and Antarctica.

The company has experienced an increasing demand for the successful MS Fram sailings both in the Arctic and in Antarctica. Hurtigruten's destinations, along the Norwegian coast, off Greenland, Svalbard and in Antarctica, are recognized as the most beautiful destinations in the world.

MS Midnatsol has an ice class 1C, helipad, a redundant propulsion system and will be equipped with a customized oil retention system for trips to Antarctica.