In Aruba, Life's a Beach 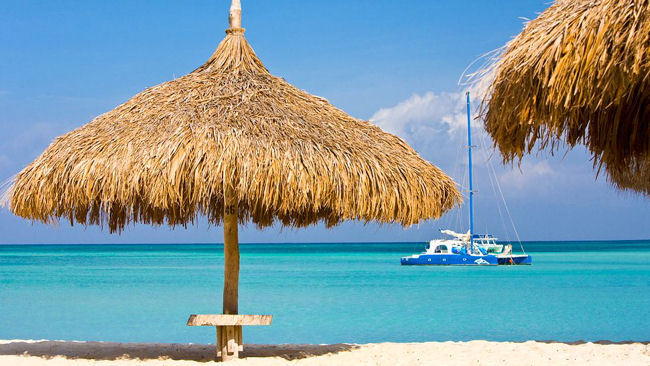 Aruba, called “The One Happy Island,” is a 19 mile-long island of the Lesser Antilles in the southern Caribbean Sea and just 15 miles from Venezuela. Together with Bonaire and Curacao it forms a group referred to as the ABC islands. As its turquoise waters collide against the desert-like terrain of the north shore, Aruba is celebrated as one of the most revisited destinations in the Caribbean. Luckily, it is located below the hurricane belt and has a temperature of 82-degree days year round; in fact, it has the most sunny days in all of the Caribbean.

Beaches here are spectacular – Eagle Beach has been named one of the top 10 in the world. On my visit, it seemed that the beach was a part of everything I did – from water activities to riding a horse on the sand to lunches, cocktails and dinners, all – where else? On the beach.

The Aruba government has launched a $350 Million project upgrading sites in Oranjestad, the capital, as well as building Linear Park, which will be the longest of its kind in the islands; it will create an accessible, scenic link between the airport and resorts along Palm Beach. To include bike paths, pedestrian paths, kiosks and an abundance of trees, this will be a location where visitors and locals can relax, kick-back, and enjoy.

As kicking back was foremost on my mind, I’d been told that the De Palm UTV experience was fun and one I wouldn’t forget. Well, they were right on one count. I think I’ll remember it for as long as I live. Fun – that’s subjective, isn’t it? One person’s fun is another’s… er...nightmare? To be fair, it appeared that everyone on this UTV off-road adventure was having a blast. Me? Not so much. Each vehicle carried two of us and we drove in a bumpy caravan formation led by a professional tour guide who showed us the best landmarks of Aruba. All I was aware of was crashing through roads with crater-like holes, skirting mammoth boulders, bumping, grinding, and eating dirt that the vehicle in front of me was kicking up. It was, yeah, unforgettable. UTV tours just happen to be all the rage on the island - so à chacun son goût. There are loads of water sports: windsurfing, paddle boarding, kite boarding. More to my taste was snorkeling and kayaking – and lying in a hammock.

That may be the sound of an island bird but for now, let’s consider one of the silliest, good time tours you can have: The Kukoo Kunuku picked me up at the airport and later took me on an island tour. What the heck is it? Simply a wacky, wonderful, one-of-a-kind open air bus, Reggae blasting, the driver blowing his singing horn, and we loonies shaking our maracas and calling out to pedestrians as we ride by. The company says it’s “the perfect way for the old and the reckless and the young and the restless to tool around.” I’ll second that. 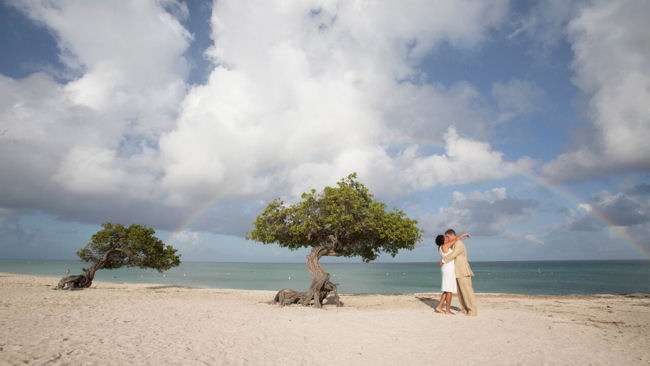 Another activity quite popular here: Getting hitched. Aruba has been named one of the world’s top wedding and honeymoon destinations by Brides Magazine. From the Divi Resort to the Renaissance Resort’s private island to the drop-dead new Ritz Carlton (the first 5-star on the island) – everyone’s goin’ to the chapel – and there’s not a more romantic place to do it.

Speaking of romance, there’s a hidden gem on this island known as Boardwalk. Run by charming Belgian-raised twins Stephanie and Kimberly Rooijakkers, and considered by many as the most romantic hotel in Aruba, this small, Caribbean-colored property is situated across from the famed Palm Beach. Boardwalk has been featured in The New York Times, USA Today and National Geographic Traveler. Its lush gardens, hammocks on terraces and champagne breakfasts delivered to your room make this a perfect oasis for couples, honeymooners or anyone wanting a peaceful, serene, truly intimate home base from which to explore the environs.

On this island, it’s easy to do. No less than 90 nationalities influence Aruba’s cuisine, and the local offerings more than hold their own. At the many breakfasts, lunches and dinners I had on the beach, Keeshi Yena (chickpeas and Gouda cheese) and Funchi (fried polenta and more Gouda cheese) topped off with a perfect Ponche Crema (the best Caribbean drink, bar none) were my favorites.

Festivals in Aruba take place all year long on the island. The Bon Bini Festival is a weekly folkloric music and dance affair, the perfect introduction to the warmth and hospitality of Aruba’s people. The action commences in downtown Oranjestad every Tuesday at 6:30 pm in the outdoor courtyard of Fort Zoutman, Aruba’s oldest building. When I attended the event, the flavor of the island, its history, people, music and cuisine came through loud and clear - and I paid just $5 to attend. Mark your calendars for this coming Memorial Day: the Soul Beach Music Festival is a multi-night concert with beach parties, concerts and comedy shows. In June, there’s the Film Festival that brings the international film community to Aruba. And perhaps the most prestigious musical event in the Caribbean, the Aruba Piano Festival, takes place in September and has built up a world-wide reputation because of the renowned artists that perform.

Bon Bini means “welcome to my country.” It’s a Papiamento word, the official and most common language in Aruba and it was something I often heard on my visit. I never did learn the word for “Goodbye,” undoubtedly because I didn’t want to say it. I much preferred the local phrase Te Aworo – see you later - thus insuring my return.