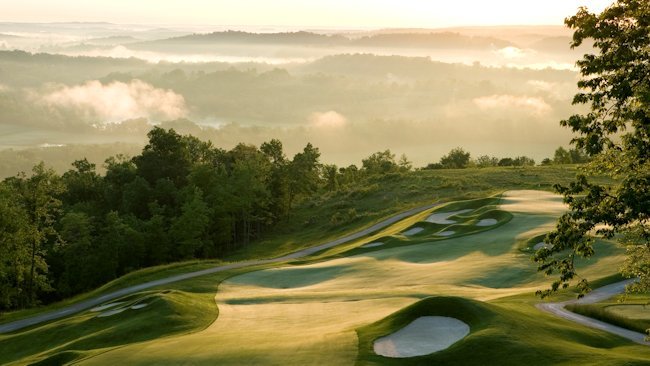 The French Lick Resort has had a long and storied history -- commencing as far back as 1845. The hotels brought to bear a regal grandeur -- providing timeless charm and utter splendor. When West Baden Springs Hotel opened in 1902 -- it possessed the largest free-span dome in the world -- supplanted years later by the now defunct Houston Astrodome in the 1960's. In the 1990's the two primary hotels -- French Lick Springs Hotel and West Baden Springs Hotel appeared to be headed into utter oblivion. The shell of the buildings was crumbling and the prospects for continuing, as they so gloriously did for many past years -- appeared doomed.

Fortunately, through a unique set of circumstances -- local volunteers and the people at Indiana Landmarks pushed to preserve these historic properties. But the real financial muscle came from the late Bill Cook. Cook was a resident of nearby Bloomington and had made his fortune in creating and selling medical devices. 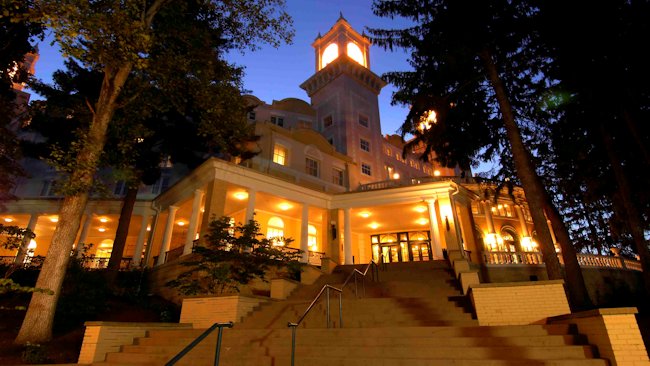 In 2005, CFC Incorporated, a Cook Group company, purchased both the French Lick Springs and West Baden Springs Hotels. A massive rebuilding and renovation program for the hotels went ahead -- to the tune of $560,000,000. The money also was put forward to build a grand casino, creation of The Pete Dye Course at French Lick and the restoration of The Donald Ross Course and Valley Links at French Lick.

The hotels reopened in 2007. Each is listed as a National Historic Landmark (NHL), National Historic Civil Engineering Landmark and listed on the National Register of Historic Places. The total size of the property takes in approximately 3,000 acres of land -- much of it rolling with some of the finest views of the immediate Indiana countryside with the nearby Hoosier National Forest. 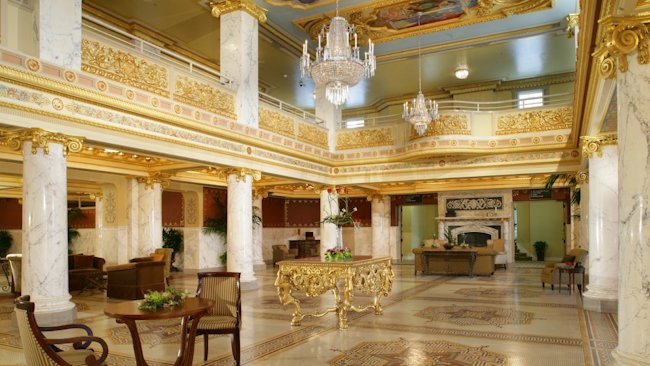 My ride from Louisville to French Lick took roughly 90 minutes. Meandering through a cloudy dark night with fingers of fog floating over Highway 150 provided an eerie sensation. Driving the twisting and turning road I ventured past countless farm houses with predictable rural landscapes in all directions -- not a hint of what I was to encounter when entering French Lick. Upon seeing the West Baden Springs Hotel for the first time -- I was immediately struck by the massive nature of the property -- exterior lights amplifying all of its fascinating architectural details in the night time setting.

Interestingly, although French Lick is rather isolated it is within an easy drive of several large communities such as Louisville, Cincinnati, Indianapolis and St. Louis. The two hotels are also different in terms of the clientele they generally host. French Lick Springs draws those interested in the casino since it is located nearest to that hotel. Families with children as well as younger people often opt to stay there. Those opting for the West Baden Springs generally prefer the more formal setting provided there.

After checking in for the evening at the West Baden Springs -- I was eager to see how the golf dimension -- all 63 holes -- would fare during my several day visit. 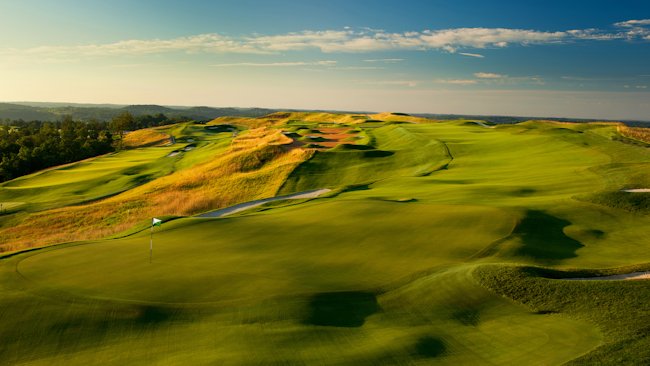 PETE DYE COURSE -- Opened in the Spring of '09 -- the layout is the handiwork of architect Pete Dye -- arguably the most influential course designer in the 2nd half of the 20th century. Dye, an Indiana native has been responsible for a number of top tier layouts -- including Whistling Straits, site of the 2015 PGA Championship, the Ocean Course at Kiawah, Pete Dye GC in West Virginia and The Golf Club, just outside of Columbus, to name just a few notable efforts.

The Dye Course at French Lick sends an emphatic message. When stretched to its maximum length of 8,102 Yards -- sporting an 80.0 course rating and 148 slope -- is an overpowering layout not likely going to be overtaken by any future gains made in golf equipment technology. The course sits atop a gorgeous plateau -- 360 degrees of miles and miles the immediate countryside. Fortunately, during my stay there I was able to enjoy the intoxicating views as the holes tumble up and down throughout the property.

No person in their right mind -- should remotely contemplate playing the extreme back tees unless you're fully capable in hitting consistently 300+ yards tee shots. The course is still immensely challenging enough at 7,254 yards with its 76.2 course rating and 139 slope.

The lone downside of Dye's effort is that too often he has added a series of overkill items. The par-4 2nd -- with its volcano bunkers -- is a classic example of this. The old time adage of "less is more" would work even more effectively on this site if carried out. With quality land on hand there's no need to throw everything save the kitchen sink into the design.

Another example is having a 300-yard par-3 -- the 16th hole -- which features a water hazard hugging the right side of the green as close as any four-year-old holds a parent on their first day of school.

There are also abrupt fall-offs should tee shots or approaches miss the mark. No question penalties need to apply for failed execution but receiving the death penalty for such slight mistakes borders on the extreme.

On the plus side The Dye Course provides for a good mixture of holes -- there are "choke" points where the desire to get down the fairways will meet a pinch point where the shot must be hit with total precision in order to reap the benefit of added distance.

The putting surfaces are generally well done and it helps imnensely to have accurate approaches to avoid the likely outcome of three-putt greens.

From a conditioning perspective the course is top tier -- frankly even too lush and soft. Given the terrain encountered and array of hazards and obstacles to overcome -- it would be a worthy element if the course played more on the firmer and faster side so that the bounce of the ball after landing could increase overall yardage gained, while at the same time, bringing into play the strategic elements found on a number of the holes.

The cost to play isn't cheap -- $350 plus forecaddie -- but the best part is that you can play as many holes as you wish for that daily rate.

Overall, The Pete Dye Course is a tough hombre -- getting off the tee consistently for both length and accuracy is a must. For those who relish what Pete Dye provides his design here will either be a thrilling escapade or a back breaker - mentally and physically. Just play the correct tees because as Clint Eastwood was famous for saying in one of his Dirty Harry movies -- "A man's got to know his limitations." The Dye Course will most certainly inform you of that -- swiftly, soundly and with total certainty. 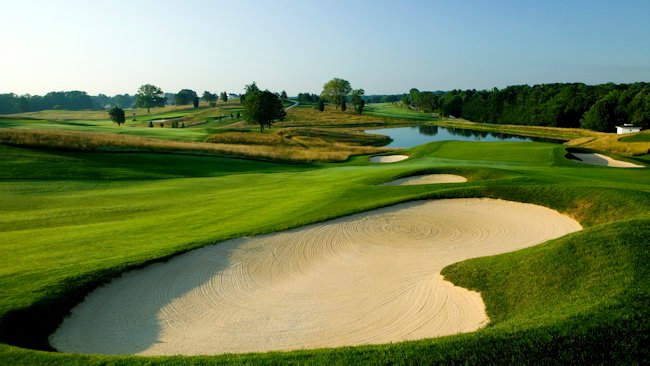 DONALD ROSS COURSE -- Opened for play in 1917 -- the layout went through several years ago a $5 million restoration in collaboration with the Donald Ross Society -- a group that seeks to ensure that Ross layouts preserve the elements Ross originally envisioned.

Ross was in such demand during his peak work years that many of his courses were based simply on drawings, and, after many years these courses were altered by the clubs themselves through other architects imposing their own personal fingerprints -- it is hard to find a genuine Ross course that doesn't look like it's been done by Betsy Ross. At French Lick the genuine article awaits.

How good was the course initially? It served as host for the 1924 PGA Championship.

Located just a few miles from the main hotels -- the first element of note when arriving at the site is the spectacular rolling terrain. Not excessively hilly but features a series of gentle waves serving to bring out the design elements Ross so expertly imbued.

Unike The Dye Course -- Ross gives the player sufficient elasticity with the tee shot. There is more than amble room in the fairway areas but it pays to play approach shots from the optimum side of the fairway because the putting surfaces are angled to accept -- or repel -- shots that are played correctly -- for yardage and trajectory.

The course is very walkable unike its big brother neighbor -- and the fees are very affordable -- $90 to play on weekdays and $120 on weekend & holidays with cart provided. From the maximum tees the course is 7,030 yards and plays to a par of 70. The course rating from the Gold Tees is 72.3 with a slope of 135.

The maintenance side is good -- save for a few tees needing to be leveled as well as lower fairway cuts thereby enabling a somewhat "faster" track allowing a bit more roll.

The Ross Course demonstrates the utter genius of the man who came from Scotland to designs some of the finest courses in the United States with the likes of Pinehurst #2, Seminole in Florida and Oakland Hills / South just outside of Detroit, among others.

The most exciting element of The Ross Course is that the course is chock full of subtle design details -- not heavy handed or bordering on the overkill as The Dye Course often does. There's just enough land movement where missed shots can roll further away from the intended target but still permitting the opportunity for the brilliant recovery. Ross understood missed shots are a near certainty and he didn't want to bombard players with "death penalty" outcomes that would derail the desire of players to return again to play. The ultimate test for any course is whether a return visit is not only merited but eagerly sought. The Ross Course does that in spades. 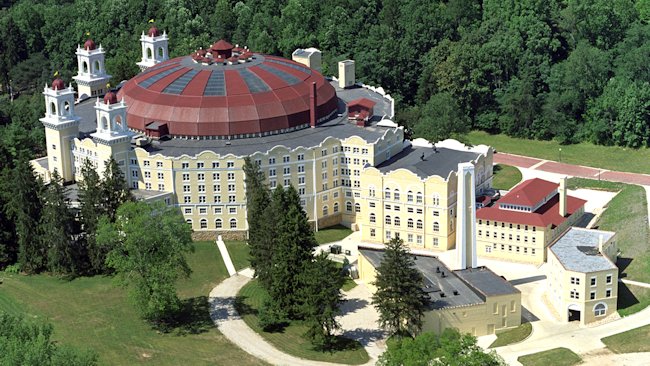 SULTAN'S RUN GOLF COURSE -- Located roughly 25 miles away from the main facility in Jasper -- Sultan's Run is managed by French Lick and is located on 224 acres of rolling terrain. The 18-hole course was designed by a Pete Dye protégé -- Tim Liddy. The front nine is rather benign but it's the inward half of holes where the intensity of the needed shotmaking reaches a crescendo. The facility is named for the horse -- Supreme Sultan -- who sired a record number of successful race horses.

VALLEY LINKS GOLF COURSE -- You can also play just nine holes on the Valley Links course. The layout has been restored in the spirit of Tom Bendelow's original 18-hole design and allows for sufficient challenges without being overly demanding for nearly all levels of players. Holes of note include the long par-4 2nd which begins from an elevated tee -- the uphill par-3 7th and par-5 8th are also well done and provide for plenty of shotmaking challenges with interesting putting green contours.