Inside Prince William and Kate Middleton's India and Bhutan Trip 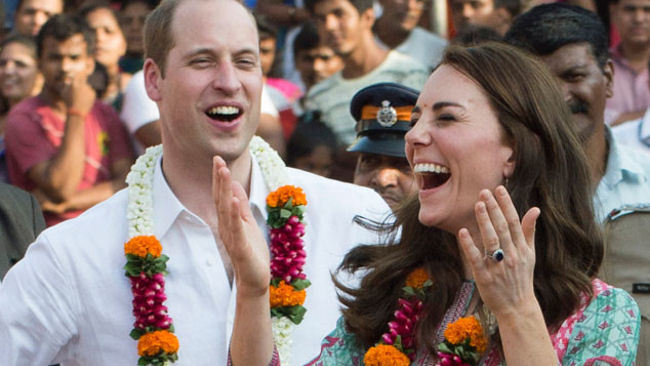 Despite only landing Sunday, the couple put aside their jet lag and have already been partying with Bollywood's finest. For the next five days they'll be on a punishing schedule as they travel through India, and onto the remote Himalayan kingdom of Bhutan. There will be a lot of hand shaking as they navigate thousands of photo opportunities. It'll be a grueling trip (which is why they have opted to travel without Prince George and Princess Charlotte), but it's guaranteed to leave a smile on William and Kate's face.

Here is E!'s essential guide to what we can expect.

1. We're going to catch Kate-Mania all over again: Kate's being accompanied by her trusted Glam Squad to ensure she looks impeccable. With her is her hairdresser, Amanda Cook Tucker, and her assistant and sometimes style-adviser, Natasha Archer.

Amanda's famous for giving Kate's curls that extra boing, and for her top secret visits to St Mary's Hospital straight after the birth of George and Charlotte (ensuring Kate looked perfect on the hospital steps). Natasha, who is better known as Tash to palace regulars, has been Kate's personal assistant for the past few years, but more recently she's been doing double duty as her style guru.

For this trip, Kate has packed at least two outfits a day, including looks for daytime and, of course, an array of glitzy evening wear (then there are her trusty nude pumps and also hiking boots for the more adventurous activities).

Kate has been diplomatic in her choices making sure to pay respect to the host countries she's visiting, as well as mixing in some of her favorite designers (such as Alice Temperley and Jenny Packham). Her wardrobe will be worth well over 10,000 dollars and will take into account the hot temperatures of India with the cooler climate in Bhutan.

We've been told to expect vibrant colors so she can stand out from the crowd, and she'll be making sure to cover her shoulders and knees when she visits sacred temples and monasteries. The A-team are there to make sure everything goes off without a hitch.

2. Prince William may end the trip a few pounds lighter: During a Kensington Palace reception held last week, a partygoer shared her conversation with the royal couple and William's concerns about this week, "[Kate] told me she loves Indian food and I said she would be fine. And William said he struggles with the spices."

Poor Wills. He's going to have a really hard time avoiding the pungent flavors, which are added to almost every dish in south Asia. And when he gets to Bhutan, oh dear, it's going to be even harder. The national dish in the remote country consists of extremely hot chili peppers mixed with cheese. It's very unlikely he'll be able to get through a meal without some perspiration on his brow.

3. They are going to be surrounded by cannabis: William and Kate are known to enjoy the odd bottle of wine when they are relaxing with their friends at their local pub in Norfolk and even a glass of port with the Queen at Christmas, but when they reach Bhutan on Thursday, they're going to be surrounded by a completely different kind of "pick-me-up."

There the plant grows like a weed and is found everywhere; in the fields, on the side of the road, you can even see it growing on the roof of houses. While the Bhutanese are not big recreational pot users, apparently their animals are, so instead the farmers like to feed it to the pigs.

A little word of warning to William and Kate, be careful what you add to your afternoon cup of tea as some locals specialize in cannabis-infused milk. A possible explanation for why the Bhutanese government measures society by Gross National Happiness rather than GDP.

4. If they're thinking of giving George and Charlotte another sibling... Bhutan might be the place to start practicing.

Many of the houses and buildings in the country are decorated with hand-painted pictures of penises. Detailed phalluses are everywhere! Some as tall as the building they adorn. The male sexual organ is thought to bring protection and fertility. And, inevitably, will lead to a few awkward photo opportunities for the couple and the world's media!

5. William and Kate will be meeting the other William and Kate: On Thursdayevening, the British royalty will have an intimate dinner with Jigme Khesar Namgyel Wangchuck and his wife Queen Jetsun Pema at their palace in Thimphu.

The stunningly gorgeous couple are known as 'the William and Kate of the Himalayas' and the foursome will certainly have a lot to talk about. The other Will and Kate had a beautiful fairy tale wedding that was also televised (TV and internet was banned in Bhutan until 1999), they welcomed their first baby in February and the beloved "Dragon King" is known for his down to earth ways.

He actually studied in the U.K. and the U.S., is a huge basketball fan and loves Elvis. Their Thimphu home is magnificent (it's the only capital city in the world without a traffic light).

6. We'll get a chance to see William and Kate's famous competitive streak: Will and Kate will put their endurance capacities to the test when they hike up to Bhutan's most spiritual temple known as Tiger's Nest.

The walk up to the monastery, which is built into a sheer cliff face 10,200 ft. above sea level, takes about five hours and weaves through mountains and forests, with colorful prayer flags leading the way. The high altitude means the trip will be exhausting, even for super fit Kate, although they will be able to catch their breath as they stop to twirl the traditional prayer wheels en route (it brings good luck). The view from the top makes every step worth it. But who will reach the top first?

7. They'll be flying into one of the most dangerous airports in the world: Paro airport in Bhutan is so risky only a handful of pilots are qualified to fly there.

The teeny airport, and it's equally tiny runway, is wedged in-between huge mountain peaks. Planes have to maneuver around mountain tops, and come within feet of village rooftops in order to land there. It's thrilling and scary all at the same time and sure to make the couple squeal with delight.

8. Prince William will be paying the ultimate tribute to his late mom: In what is sure to be the highlight of the trip, on Saturday, William and Kate will be able to bring new meaning to the enduring photograph of Princess Diana sitting alone at the Taj Mahal.

The picture of a solitude princess was taken in 1992. And unbeknownst to the world at the time, Prince Charles and Diana's marriage was on the rocks (they would announce their separation just a few months later). The Taj Mahal was a place Charles had previously said he would like to one day be able to take his wife. But as a pensive Diana sat on the bench (now known as Lady Di's chair) in front of the stunning symbol of love, built by a heartbroken emperor for his deceased wife, Charles chose instead to spend the day at a nearby architecture school.

At the time, Diana told photographers, "It would have been better if both of us had been here." But later, she admitted, "It was a very healing experience." When a reporter asked her what she meant she said, "Work it out for yourself."

Going back to the scene of his mother's heartbreak will undoubtedly be emotional for William. But it will also give him a chance to pay tribute to his late mother, and even more poignantly, he will be able to do it with the love of his life by his side. Then William and Kate will be on their way home, keen to get back to George and Charlotte's side.

And even though their adventure will be over, they will still have a lot to celebrate. It's Queen Elizabeth II's 90th birthday on April 21st and then, early May, little baby Charlotte will be turning one. We can't wait.

Monday, April 11: The Duke and Duchess will meet with young entrepreneurs and then fly to New Delhi where they will lay a wreath at India Gate, the country's main war memorial. They will then travel to Gandhi Smriti and follow Gandhi's final footsteps from his bedroom to the garden where he was assassinated in 1948. Then they will attend a birthday party thrown in honor of the Queen.

Tuesday, April 12: The pair will have lunch with Indian Prime Minister Narendra Modi. They will then go to Kaziranga National Park in Assam for the conservation portion of their tour. They will then celebrate the Assamese New Year by a campfire with music and dance performances.

Wednesday, April 13: They will start their day with an open-air drive around the park and then William will give a speech condemning the poaching of rhinos for their horns. Then they will visit a wildlife center for injured, displaced and orphaned animals. They will then travel to a health clinic for elephants.

Thursday, April 14: They will head to Paro, Bhutan and meet the King and Queen. They will then attend an open-air archery venue before re-joining the couple for a private dinner at their palace in Thimphu. Friday April 15 They will hike up to Tiger's Nest monastery. The evening will be spent with British nationals in Bhutan.

Saturday, April 16: They will fly back to India. This time to the Taj Mahal in Agra. Then it'll be time to fly home to the U.K.