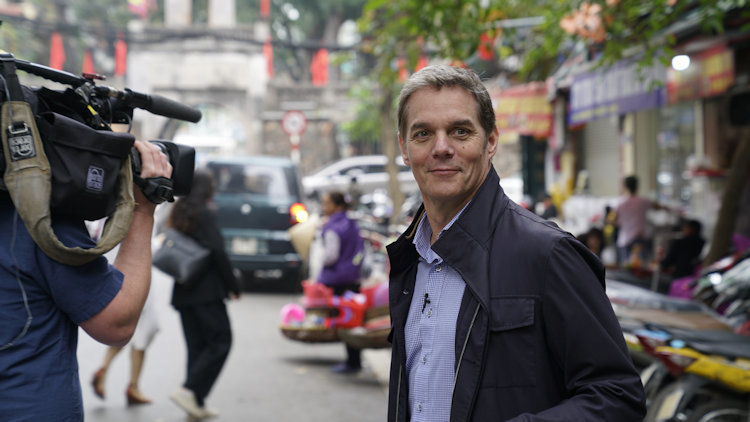 Bill Hemmer is reporting live this week for FOX News Channel on the North Korea–United States Hanoi Summit in Vietnam. He is co-anchor of America’s Newsroom (weekdays 9am-12pm ET) on Fox News Channel.  Bill has a personal connection to Vietnam -- 25 years ago he was backpacking around the world and visited Vietnam.

He was in Southeast Asia at the time where the laws had just changed for individual travelers in Vietnam.  Under the communist system you had to take their plane, stay at their hotels, and dine at their restaurants. The rules have changed to allow some private ownership of cafes, hotels, etc. and to allow individual travelers to come without being part of a group – and he was one of them.  Here he tells us how Vietnam has changed since he was there 25 years ago.

In the early 1990s when Vietnam was just stepping out onto world stage again, copy-editors across America couldn’t resist Good Morning, Vietnam as a headline. Even today, you still see that headline pop up. Does it still feel like morning in Vietnam?

You’re not alone, we used the same line the other day when we landed! A bit trite, but Vietnam has gone through its own version of an economic renaissance. It is still a single-party, Communist country, but they’ve allowed the market to expand and they’ve been rewarded with enormous growth. I am sitting 15 stories above Hanoi as I type this and the roads are buzzing below with the fury of an afternoon rush hour.

Ho Chi Minh City, or Saigon as it’s still commonly called, hardly looks like the same place these days. Would you say the same of Hanoi?

This city took pride in its low lying buildings and tree lined streets. You can still find that in The Old Quarter downtown, but West Hanoi is remarkably different.  Tall buildings,  and modern hotels, like the one we are working out of this week. But I strongly believe the biggest change is not a road or a building, but that every driver on every motor scooter has a smartphone in their pocket. They have access to nearly everything on the iPhone and that information and accessibility has no price tag. It has changed the world.

Are there any places that you find yourself going back to in Hanoi when you have a spot of free time — places that you might have experienced as a younger traveler and that have staying power?

The Hanoi Hilton is the prison where US Servicemen, including the late Senator John McCain, were held in captivity for nearly six years. 75 percent of the prison has been torn down and converted into an apartment complex,  while the remainder serves as a museum filled with mostly propaganda about the war and the U.S. involvement. You can buy a ticket and take a self-guided tour. The other must-see is the mausoleum to Ho Chi Minh where the founder of modern day Vietnam lies in state. I claim the Communist Trifecta: having seen three Communist leaders in their respective states here in Hanoi, Beijing and Moscow.

What for the typical American traveler do you think is the real lure to Vietnam, as distinct from Thailand say or Malaysia. Are they beaches? Is it the food? Is it the deep cultural heritage? Is it historical connection that America has to this place?

For my generation, it is the war. That’s why I came here in 1992.  Growing up, we were too young to understand the conflict but we knew it was a time of turmoil. To come here, see it for yourself, gain an understanding I believe is what brings value to the experience. I think of my uncles who served a few tours in Saigon and Danang and I consider the sacrifice they made for their country and their families.

What’s your preferred home away from home when staying in Hanoi?

We are staying at the newly built Crown Plaza and they have made us so comfortable. They have also learned quickly the art of service. And I highly recommend The Bamboo Bar at Sofitel Legend Metropole Hanoi (where President Trump and Kim Jong-un are meeting). It is a beautiful room, outlined in wood with ceiling fans drifting overhead. Regardless of what comes of out of this summit for the U.S., or North Korea, Vietnam has been challenged to pull off a successful event. If they do, that’s how Hanoi wins in the eyes of the international business world. It is a big moment for them and they want to get it right.

FOX News Channel is broadcasting live from Hanoi this week where Bill Hemmer and Special Report’s (weekdays 6-7PM/ET) Bret Baier are presenting their respective programs from the JW Marriott Hotel in Hanoi, where they will break down the latest developments from the summit with expert guests and analysis.