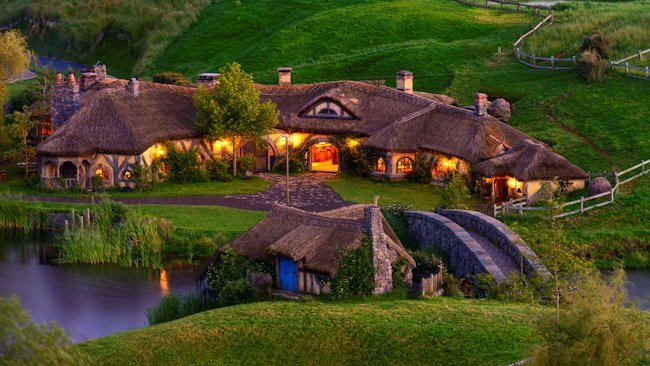 Fans of Sir Peter Jackson's famed Hobbit trilogies can now follow in the footsteps of the cast and crew and journey through New Zealand taking in remarkable and diverse natural landscape while enjoying the warm hospitality Kiwis are known for.

Where better to start the journey than where the trilogy begins, at the Shire; the idyllic home of the Hobbits. Hobbiton Movie Set, near Matamata is the original movie set complete with Hobbit holes, The Green Dragon Inn, the mill, double arched bridge and other structures and gardens built for the films.

Heading in a southerly direction, in under two hours, travellers arrive at the King Country with its distinct karst formations - the unmistakable site of Trollshaws forest. At Denize Bluffs, the Mangaotaki Rocks near Piopio village provided the backdrop for the Company as they travelled en route to Rivendell where they encounter the stone trolls in the first movie. Hairy Feet Waitomo Scenic Film Location Tour offers twice daily guided tours through the staggering valley landscape.

From here, head South towards Mt Ruapehu's Turoa ski field to reach the location of Hidden Bay, the secret door that leads into the Lonely Mountain, or Erebor in the Hobbit films. To see this as is in the film, visitors must go in the summer months when there is no snow.

Wellington, also affectionately referred to as Wellywood, is the political and cultural capital of New Zealand, home to Sir Peter Jackson and his creative entities 3 Foot 7, Wingnut Films, Weta Workshop and Weta Digital. Weta Cave Workshop in the suburb Miramaroffers tours with stories of the creative process told by the film's crew members using props and models and glimpse into the workshop where you get to see creativity and imagination make movie magic.

With a mild climate, Nelson on the top of the South Island draws visitors year-round. The nearby Mount Owen in Kahurangi was used to film the scene depicting the eastern exit from the Mines of Moria in The Lord of the Rings: The Fellowship of the Ring.

Nelson itself, renowned for arts and crafts, has more than 300 artisans living and working in the region. Among them, is Jens Hansen Goldsmith The Ringmaker on Trafalgar Square in central Nelson who successfully submitted the design for the One Ring. In total, 40 rings were made, and one of the originals is still on display in the store.

An hour's drive from Nelson is Havelock, a laid-back coastal village also known as the green-shell mussel capital of the world. From here, visitors can easily access the Pelorus Bridge across the Pelorus River which meanders through one of the last river-flat forests in the Marlborough region. This is instantly recognisable as the spot where the dwarves and Bilbo Baggins were washed ashore following their escape from capture by King Thranduil and chased by Orcs, down the Forest River. Pelorus Eco Adventures offers rides on inflatable canoes past the waterfall.

For outstanding natural beauty unaltered by advanced CGI technology, allow plenty of time to explore the vibrant blue Lake Pukaki in Mackenzie Basin. Set against the striking backdrop of Aoraki / Mount Cook, this is the location of Laketown in The Hobbit: The Desolation of Smaug.

And then of course there's Queenstown, one of New Zealand's top visitor destinations and also the living set of Dimrill Dale (The Remarkables), the Ford of Bruinen (Skippers Canyon and Arrow River) and Pillars of the Kings (Kawarau River).

To get your bearings, scenic flights such as those offered by Queenstown based Heliworks are a great way to take in multiple locations from the sky, and many of the packages on offer include landings allowing access to the more remote and hard to reach filming locations. Those travelling by land, with 4WD operators such as Nomad Safaris, can head towards Glenorchy and the Paradise Valley to visit Isengard, Ithilien Camp, the Lothlorien forest and the vast glacier of Mt Earnslaw, Earnslaw Burn, where the dwarves climbing towards the Misty Mountains was shot.

For a truly holistic Hobbit experience, Air New Zealand, the official Airline of Middle-earth recommences its Singapore - Auckland route from 6 January 2015. Passengers and movie fans alike can expect world class award-winning service, as well as the chance to try out the airline's signature Economy Skycouch™, not to mention The Most Epic Safety Video Ever Made featuring members of the cast from all three films in the Trilogy and cameos from The Hobbit Trilogy director Sir Peter Jackson himself. With this new alliance between Air New Zealand and Singapore Airlines, travelers can now enjoy three flights a day between Singapore and New Zealand.

With all this and more, visitors to New Zealand are sure to enjoy an unexpected journey of their own.