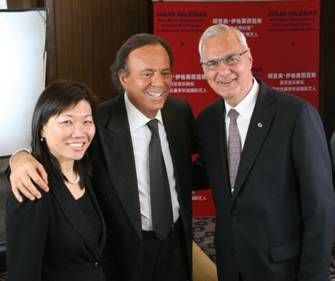 Returning to China after almost 20 years, Julio was invited to a press conference on April 1st at the Regent Beijing to receive two historic awards presented by world renowned Chinese pianist, Lang Lang.

To honour his extraordinary career in music - marked by global success and No.1 hits in a record number of languages – Lang Lang presented Julio with the First & Most Popular International Artist in China Award from Sony Music Entertainment and the Guinness World Record for Best-Selling Male Latin Artist, with over 300 million global record sales.

The press conference also launched Julio's 3-show concert tour in China this month, which further promotes the release of his already worldwide multiplatinum CD, Julio Iglesias 1. On the album, the singer-songwriter performs many of the tracks that made him one of the most outstanding artists of our time and proves once again why he is listed among the names of eternal stars like Elvis Presley, The Beatles, Frank Sinatra and Michael Jackson.

Entitled “Top of the Romance – Julio Iglesias China Live Tour”, the tour will see Julio perform global hits beloved by fans in China and around the world at the Shanghai Grand Stage on 14 April, the Shenzhen Concert Hall on the 18 April, and the Beijing Exhibition Centre Theater on 21 April 2013.

In addition to hosting this historic press conference and award ceremony, the Regent Beijing hosted Julio Iglesias for two nights in its award-winning 361 square metre Imperial Suite, which was lauded as the "Top Presidential Suite” in Beijing by the Hurun Presidential Suite Awards in 2011 for “elegantly interweaving contemporary luxury with the exquisite charm of historic China.”

During his stay, Julio also experienced the Regent Beijing's VIP Services programme, a newly created programme based on the Tao of Regent - a service philosophy that emphasizes three simple but crucial principles: “to hear without being told”, “to see without being shown” and “to know without being asked”.

With a team of dedicated VIP Services Agents who are meticulously scrutinized, selected and trained to bring this service philosophy to life, the Regent Beijing is well-equipped to offer world-class, personalized service for legendary international VIPs like Julio Iglesias.

“It was a great honour to have two of the world's most celebrated musicians – both Julio Iglesias and Lang Lang - in our hotel for such an exciting and historic event, not to mention hosting Julio in our award-winning Imperial Suite. This is just one more reason why the Regent Beijing is widely regarded as not just one of the very best hotels in China but also the world.” said Managing Director, George Benney.