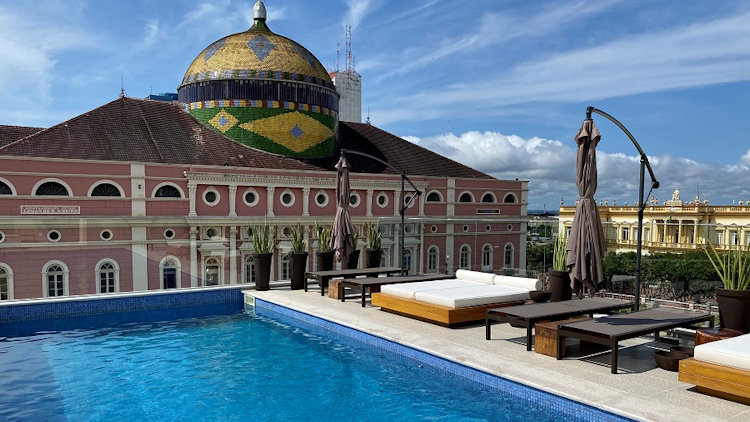 Juma Opera Hotel, in Manaus, maintains the original architecture with a modern touch. Opposite the Amazonas Opera House, a new boutique hotel offers five-star contemporary design without losing the historical identity of its surroundings.

At the end of the 19th century, in the heyday of the rubber boom the so-called rubber barons decided to build na Opera house in the middle of the Amazon rainforest and that was when the Amazonas Opera House in Manaus, which is one of the world's most beautiful and famous theaters, made its first appearance. At the same time, around 1897, mansions were also built in the surrounding area, in the same style as the classic French Belle Époque. Two of these listed mansions were restored in order to house the Juma Opera Hotel, which was opened on 02/02/2020 as the city's newest boutique hotel.

In addition to the mansions, the luxury development complex includes two other buildings built along similar architectural lines. The main concerns of the project that was headed up the architect Roberto Vinograd included preserving history and maintaining the harmony of the surroundings. So much so that all the wiring that was in front of the hotel was redone and structured in an underground way so that the facade was unobstructed and could be properly appreciated.

Inside, there are 41 suites that range from 23m² (248 ft2) to 66m² (710 ft2) all of which have high ceilings, with the majority having a view of the theater. There is also a restaurant, bar, rooftop area with a swimming pool, lounge, gym and convention center.

The decoration of the common areas blends comfort with the freshness of nature, which is so abundant in the region. The project, which was created by the architect Debora Aguiar, who is a specialist in the eco-luxury concept, results in a perfect mix between contemporary elements without losing its historical roots, with finishes in soft tones such as ecru colors and beiges, punctuated by greens, caramels and browns, all with aim of creating a welcoming sensation. The design also includes pictures and objects that show the indigenous culture, local handicrafts and the beauty of the flora and fauna.

Among these objects, we highlight the Baniwa baskets that are made by hand by the Baniwa Indians using arumã (Ischnosiphon polyphyllus) leaves dyed with annatto and woven one by one. In the indigenous culture, the waláya, as they are called, were used to collect the freshly grated and squeezed cassava or to store provisions. The decor is supplemented by decorative panels in fiber and slatted wood, along with light fixtures designed by the architect.

The project also shows great concern for the environment. In addition to using solar energy as the basis for the heating system, a number of areas are coated with ceramics made from recycled glass. For the guests' comfort, all of the doors and windows have soundproofing.

The extremely privileged view is one of the Juma Opera Hotel's major attractions and it extends throughout the entire complex. From the rooftop terrace, which is an area with exquisite landscaping that houses a bar and a pool, one can see the Rio Negro and enjoy the Amazon Theater very beautiful and one of a kind dome, which is covered in more than 35 thousand pieces of colored ceramics in the colors of the Brazilian flag.

The Juma Opera's Restaurant is another of the hotel's architectural highlights. The area is an elegant gazebo with an iron dome and is made entirely from glass in order to take advantage of the sunshine and, mainly, to have the Theater as a backdrop during meals. The menu which was created by the chef Sofia Bendelak contains a blend of modern cuisine and regional influences.

The Juma Opera Hotel is located at Rua 10 de Julho, 481. More information can be found on the website www.jumaopera.com and on social media @jumaopera.

The hotel belongs to the same owners of the Juma Amazon Lodge (www.jumalodge.com.br), a prestigious jungle hotel which has been in existence for more than 20 years and which also has a marked concern regarding sustainability.