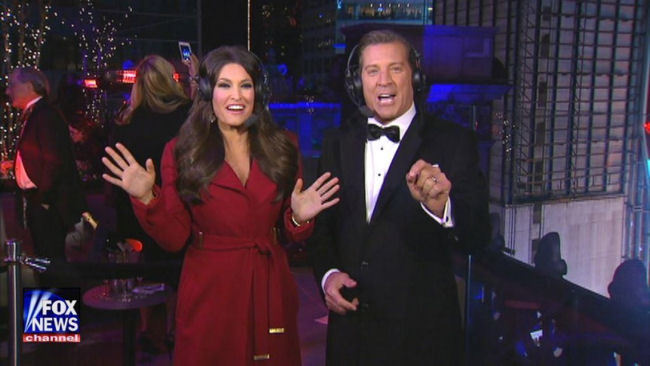 What's it like co-hosting New Year's Eve festivities live as the ball drops?

It's feels like you're in the center of the universe with people from every country around you celebrating together. There's no better place than being in the greatest city in the world on New Year's Eve and hosting is like a front row seat to the biggest party on the planet!

Where have you traveled in 2016 and did you have any favorite places?

I traveled to Miami for Art Basel which was a lot of fun. I also took a few trips to Los Angeles but my favorite would have to be the road trip I took with my co-hosts of The Five to the Republican National Convention in Cleveland and the Democratic National Convention in Philadelphia. We spent two weeks on a bus and stopped in so many cities. We all had so much fun and it's a trip I'll never forget!

What are your travel aspirations for 2017?

I would love to take a trip to Puerto Rico and bring my son Ronan to Aguadilla and show him where my mother was born. I'd also like to go to Ireland and visit the town my father grew up in. Heritage is very important to me and I always teach Ronan about his roots because that's a big part of who you are.

Where are your favorite places to travel?

I love Italy, Spain and Mexico. Those are all very beautiful countries and each have such timeless charm.

Do you have any favorite hotels?

There are a bunch of hotels that I like but the Ritz-Carlton and the Shelborne in South Beach are two of my favorites for a quick weekend getaway.

Do you have a best and worst travel story?

I'd probably have to say The Five road trip. We all had a blast and it was so much fun but having to live on a tour bus for two weeks was something I definitely wasn't used to. I also had never kissed a pig before, and it took a while, but I made it happen at the kiss a pig contest at the Derry Township Agricultural Fair. Still can't believe I did that!

Do you keep a bucket list of places you'd like to visit? If so, what are some of the top destinations?

I'd love to visit Australia – it's like a whole other world down there! I'd also like to take a nice relaxing vacation in St Bart's. It looks absolutely breathtaking and I've heard nothing but great things from my friends who've visited the island. I definitely have to get there soon.

What was it like at Art Basel in Miami?

Art Basel is such a unique experience, because it attracts so many different types of people from all over the world and it is so immersive. Art is literally everywhere you look in Miami during that week - not just at Art Basel itself and the satellite fairs, but in the parks, at the beaches, on buildings, and in all the hotels and restaurants.

What's it like to attend New York Fashion Week?

It's always very exciting. I love seeing all of the different outfits and supporting some of my dearest friends. Zang Toi is a great friend of mine and his shows always blow me away.

I always have to have a pack of Neutrogena Makeup Remover Cleansing Towelettes on me. They're so gentle and keep my skin so fresh. I don't think I could live without them.

Your father is Irish, your mother is Puerto Rican, you grew up in San Francisco and you now live in New York City – any comments you'd like to make on this diverse background?

I love that my parents fell in love in San Francisco and am so thankful for my culturally rich background. It's heartwarming to see traits of my parents in my brother, Anthony, and in my son, Ronan. Family is very important to me.