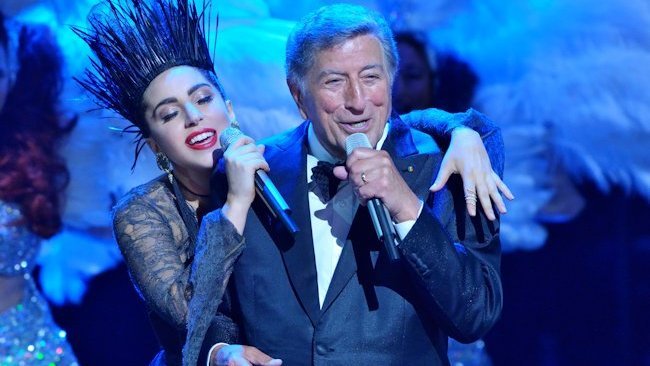 The performance is part of the resort's Atlantis LIVE concert series. Tony Bennett and Lady Gaga just kicked off their international “Cheek To Cheek” concert tour in Las Vegas with sold-out shows on December 30 & 31. Tickets for the June 13, 2015 performance will go on sale Thursday, January 22, 2015.
These once in a lifetime performances will feature tracks from their Grammy-nominated album Cheek To Cheek which debuted at #1 on the Billboard 200 charts upon its release on Sept. 23 to widespread critical acclaim. At 88, Bennett remains the oldest artist in music industry history to have an album on the #1 spot on the Billboard charts. Cheek To Cheek marks Lady Gaga's third consecutive #1 album release in just over three years.

Billboard named “Cheek To Cheek” the #1 Jazz Album of 2014.
Cheek To Cheek features classic jazz standards sung by Lady Gaga and Tony Bennett in a combination of vocal duets and solo performances. From the title track, to “But Beautiful” to “I Won't Dance,” the record showcases the chemistry between the two artists, who span 60 years in age. As Bennett says, “What I really love about being a jazz singer is that jazz artists are very creative, very honest, from phrase to phrase” and Lady Gaga adds, “We wanted to make something that sounded perfect because of the quality of the emotion…the honesty.” Cheek To Cheek also features the Lady Gaga solo “Lush Life,” accompanied by Tony Bennett's solo of “Sophisticated Lady.” The two songs compliment each other, as Lady Gaga explains, “I loved making ‘Lush Life,' Tony mentored me emotionally through the process,” and Tony Bennett adds, “I sang ‘Sophisticated Lady' to answer her on ‘Lush Life,' and because Duke Ellington wrote it, who collaborated with Billy Strayhorn, the writer of ‘Lush Life.'” Recorded in New York City, Cheek To Cheek took over a year to complete and features jazz musicians associated with both artists including members of Bennett's quartet: Mike Renzi, Gray Sargent, Harold Jones and Marshall Wood as well pianist Tom Ranier. Jazz trumpeter Brian Newman, a long-time friend and colleague of Lady Gaga appears on the album as well with his NYC-based jazz quintet. Jazz soloists on selected tracks include tenor saxophonist Joe Lovano, trumpeter George Rabbai and flutist Paul Horn, who passed away in July.

For more information on tickets and reservations, call 1-800-Atlantis or visit AtlantisBahamas.com.