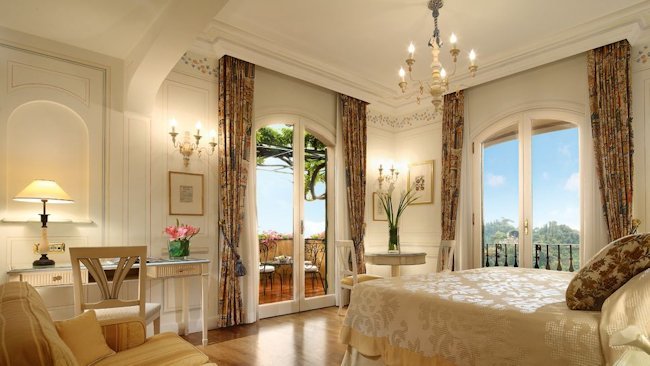 An ardent fan of the town of Portofino, actress Ava Gardner often chose to spend her holidays there. In 1952, she stayed at Hotel Splendido (pictured above), during the filming of The Barefoot Contessa, co-starring Humphrey Bogart and Edmond O’Brien. In homage to Ms. Gardner, sister hotel Splendido Mare dedicated a suite to her. Stretching across the entire top floor of the hotel, the Ava Gardner Suite offers a magnificent terrace with incomparable views of the harbor, promontory and Castello Brown, which are also fully visible from the bed and the sitting room. The 603-square-foot terrace is adorned with a huge, potted lemon tree and flowering Mediterranean plants. The expansive bedroom is incredibly well lit thanks to two generous windows that highlight the soft pastel tones of the walls, fabrics and furniture. A large door connects to the sun-filled sitting room, which boasts an almost wall-to-wall window. When open, this joins the sitting room and terrace, creating one magnificent space— half indoors and half outdoors. No doubt Ms. Gardner would feel blissfully at home here!

Cristallo Hotel Spa & Golf, an island of luxury and glamour in the heart of Italy’s Dolomites, named one of its impressive Presidential Suites in honor of renowned screen star Peter Sellers. The famed British actor played the part of Inspector Clouseau for the first time in 1963, in the legendary comic movie, The Pink Panther, portions of which were shot at the hotel. This refined and prestigious apartment is a perfect example of comfort and high-level service, in the unique and sophisticated style of the Cortina d’Ampezzo region. A flexible accommodation, the suite can range from 103 to 167 square meters. Fitted with the latest technology, including Wi-Fi, it has an airy atmosphere and boasts a large drawing room which can serve as a dining room, living room, lounge and business quarters. One sleeping accommodation has its own private living room, bedroom and bathroom with a Jacuzzi bath and hydro-massage shower. The second offers a bedroom and an amazing bathing area, decorated with marble and mosaics, and featuring a Jacuzzi bath, hydro-massage shower and private Hamam with chromo-therapy. Inspector Clouseau would be pleased, indeed!

It is little wonder that Marlene Dietrich, the siren of the classic film The Blue Angel, chose to make Hotel Lancaster in Paris her home for three years in the late 1930s. The hotel, after all, started as a private residence. Today, her tenure is commemorated in the fourth-floor suite that bears her name. With its grand piano and fireplace, the Marlene Dietrich suite is graced by a portrait of the German diva taken by Joseph Von Sternberg himself. Decorated in shades of violet, the star’s favorite color, the suite is a veritable gallery of memories. The furnishings evoke the tastes of the 1930s, updated to the 21st century – like the sublime botanical lace that borders the pink-tinged wool rug, subtly recalling the couture ornaments of those heady years. Comprising a spacious 380-square-foot bedroom with a king-size bed fitted with Egyptian cotton linens, a spectacular 560-square-foot living room, and boasting private balconies, the suite was recently refurbished – including the meticulous renovation of the oak parquet flooring. We think that Ms. Dietrich and her daughter would approve.

Completely refurbished in 2009 and dedicated to the actress – and hotel guest – Gwyneth Paltrow, the presidential penthouse suite at the Capri Palace Hotel & Spa spans 1,620 square feet on the top floor of the hotel. Combining the modern Art Deco style with the elegance of a bygone era, from the black marble flooring to the antique furniture, it comprises a main bedroom, with a large bathroom with separate shower, walk-in wardrobe, fireplace, and a ceiling window above the bed through which to admire the Capri moon. There is a second bedroom and bath, as well as a living and dining area. Measuring 3,230 square feet, the suite’s hanging garden with heated swimming pool offers a 360-degree panoramic view, enabling guests to admire the green slopes of Monte Solaro hill, the village of Anacapri, the islands of Ischia and Procida, as well as the enchanting bay of Naples. A smaller plunge pool is accessible from the second bedroom, giving the suite’s occupants an exceptional experience of privacy and pampering – perfect for discerning celebrities and their guests.

Italy offers an embarrassment of riches when it comes to suites named for film stars! The legendary Elizabeth Taylor stayed in a fabulous suite at the Villa and Palazzo Aminta, and the hotel named that suite in her honor. Reflecting the epitome of luxury, the suite is without a doubt a showpiece on its own. Located on the top floor of the hotel, it boasts sweeping views over the famous Borromean Islands and what is considered Italy's most romantic lake - Lake Maggiore, with a large private terrace in front offering perhaps the best vantage points. The suite is made up of a beautiful bedroom, fitted with goose down duvets and Egyptian cotton bed linens; a large marble bathroom highlighted by mosaics; and an elegantly decorated living room with antique furniture, a working desk, chairs and sofa. All are appointed with Murano chandeliers and lamps, and daily fresh flowers. Naturally the suite features all the modern amenities, such as mini-bar, safe, LCD flat screen TVs in both the living room and the bedroom, DVD and i-Pad. It is no wonder that the suite is the favorite of many repeat guests who like the feeling of being indulged.

Another American film legend who discovered a favorite European retreat was Gary Cooper – who shared a fondness for Hotel du Palais in Biarritz – along with such other bold-faced names as Bing Crosby, Porfirio Rubirosa, Frank Sinatra Jane Mansfield, and the Duke and Duchess of Windsor. As easily as one can picture him at the Ritz Paris in Love in the Afternoon, one can see him completely at ease in the 54-square-meter residential suite at Hotel du Palais that now bears his name. Located on the ground floor but raised above the horizon, this unique suite offers immense windows from the two vast rooms opening to a breathtaking view of the tumultuous Atlantic Ocean. Combining the perfection of elegance and comfort, it is decorated in soothing, sumptuous tones of beige and gold, and features a very large bathroom with separate shower and bathtub – which we hope he never would have let overflow like the one at the Ritz Paris!

The late owner of the The Brazilian Court Hotel & Beach Club, Leslie Schlesinger, said that Hollywood legends' names served as an inspiration that recalled the allure of another age. With a long pedigree as a favorite of Palm Beach power players, media moguls and socialites, the hotel enables guests to experience that feeling of glamour with one, two, and three-bedroom suites named after film icons Audrey Hepburn, Marlon Brando, Humphrey Bogart, Fred Astaire, and Ingrid Bergman. The Hepburn is a second floor lanai suite comprising 2,000 square feet of luxury, with two bedrooms, two and a half baths and private balcony overlooking the pool. The suite features a natural, elegant palette fit for iconic beauty. The Brando Suite on the first floor of the hotel also has 2,000 square feet with two bedrooms, two and a half baths and a private pool terrace. Its distinctive lavender tones create a feminine contrast against the dark, masculine wood throughout the space. At 1,000 square feet, the elegantly appointed, one-bedroom Astaire features a den and separate living area. Steeped in gold-on-gold tones, it also has a hideaway entrance away from the hotel's other rooms. A one-bedroom, 700-square-foot suite with separate living room, The Bogart is in the north courtyard and is suffused with shades of mustard and burgundy. And finally, The Bergman exudes freshness with celadon and lemon hues and is set up as a one-bedroom but can become a two-bedroom connecting suite if needed. Here’s looking at you, kid!

The spirit of Franco-American camaraderie lives in Deauville! Since 1974, Lucien Barrière Hôtels et Casinos has been a loyal partner of the American Film Festival, attracting some of the most famous stars from the US who enjoy strolling along the legendary boardwalks and marking their names there. The Hotel Royal Barrière welcomes many of these legends each year during their stay, and naming a suite after a movie star is a way to pay homage to them. In 1985, Elizabeth Taylor was the guest of honor of the Festival, and the first star to have a suite named for her at the hotel. The suite was decorated personally by Marta Barrière, Lucien Barrière’s wife, with blue tones evocative of the actress’s eyes. A picture of the inauguration is hung in the deluxe sea-view suite with these few words written by Liz Taylor: “Dear Marta, thank you so much for your hospitality. I’ve had a great time, and the L.T. suite is the one of the most beautiful I have ever seen – you did a fabulous job. I am very honored to have it named after me. Thank you for everything. Always, Elizabeth Taylor”. Currently under refurbishment to refresh its enduring style and elegance, the suite will retain its signature color theme. We think those famous violet blue eyes are smiling still.