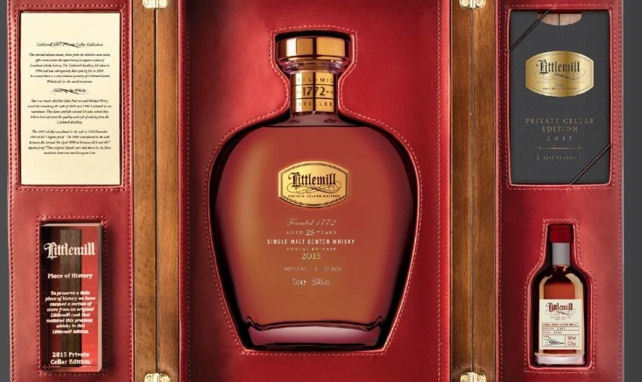 Sadly, the distillery was destroyed by fire in 2004. The remaining 1989 and 1990 casks from the Littlemill warehouse were dipped and nosed by master blenders. From these casks, the ten that were chosen were determined to be the best representation of the style and quality of whisky produced by the Littlemill distillery. The ten casks were married together for finishing in first-fill Oloroso Sherry casks to create a magnificent twenty-five-year-old Lowland Single Malt Whisky.

Although the distillery closed some years ago, Loch Lomond owners are releasing limited amounts of the now-mature stocks. The 2015 edition was distilled between December of 1989 and April of 1990 and has been bottled at 25 years old. Limited to 1500 individually-numbered bottles, the Private Cellar Edition is offered in an elegant wooden case with a miniature so purchasers can taste the whisky before opening the bottle.

Des Plaines, Illinois-based A. Hardy USA's president Mark Levinson appreciates the unique occasion to offer this special whisky to connoisseurs in the American market. According to Levinson, “This is a rare opportunity to sell historical products that, once consumed, are gone forever."

The supply is limited and diminishing quickly. The Littlemill bottle and wooden case has an average U.S. retail price of $3,199.00.