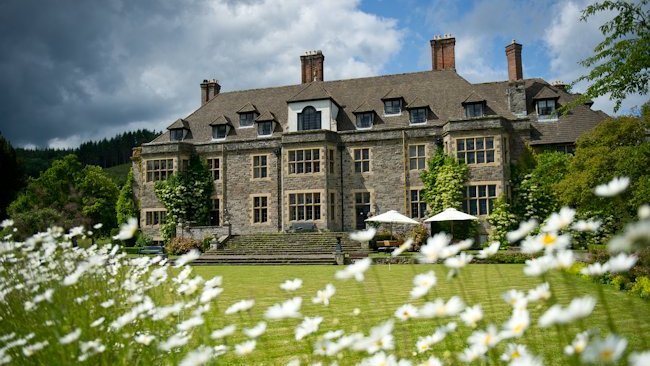 For almost three hundred years a country house in the English style, Llangoed Hall was transformed into an upscale hotel by the designer Laura Ashley and her husband, Sir Bernard Ashley. The delicate floral designs and vibrant colors that made her famous are used to decorate the interior. Her love of historic English manor homes is evident in the lovingly restored exterior with seventeen acres of meticulously maintained grounds. 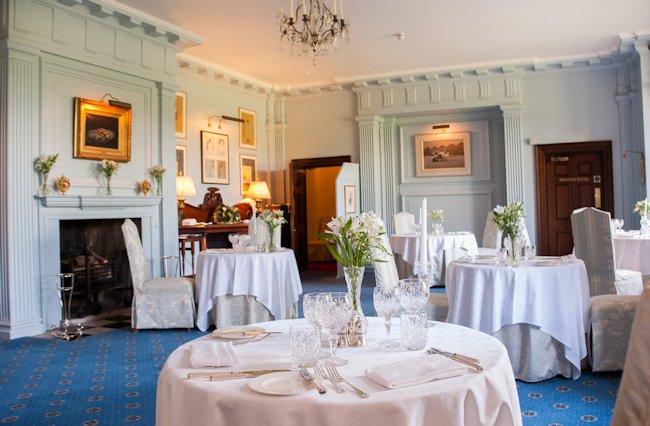 To reach Llangoed Hall in Powys county, an hour and a half drive inland from the coast, U.S. travelers fly into Cardiff, the capital city, most often transiting through Dublin or Amsterdam. Traveling from Los Angeles on the redeye, I landed in Amsterdam early the next morning. The nonstop flight to Wales didn’t leave until the late afternoon, enough time to take the train to central Amsterdam and have lunch at a small outdoor café with a view of the Royal Palace in Dam Square.

By the time I arrived in Cardiff, the sun was setting. As we left the airport, the driver pointed out a characteristic feature of the Welsh countryside, thickly planted hedgerows that line the roads. The patchwork of hedges marks the boundaries of land that has been owned by families for decades and sometimes hundreds of years.

The hedgerows hem in the cars that speed down the narrow country roads. Often two cars approaching from opposite directions will play a game of chicken. From a distance, it appears neither will give the right-of-way to the other. At the very last minute, one driver yields and pulls to the side allowing the Alpha-car to rush by.

Located off the main two-lane road, Llangoed Hall is approached by a one lane road that dips down into a broad meadow. As we arrived in the darkness of the night, the Hall was brightly lit, a welcoming sight after so many hours of travel.

Outside the entrance, a doorman waited for our car to arrive. Happily, I was greeted by name as my bags disappeared on their way to my second floor room. Dinner, I was told, would be served in forty-five minutes, enough time to change out of my travel clothes.

Refreshed by a shower in the thoroughly modern bathroom, when I reappeared in the drawing room, I was led to a comfy couch in front of a bright, crackling fireplace. Offered a cocktail and a canapé sampler, I warmed myself in front of the fire. 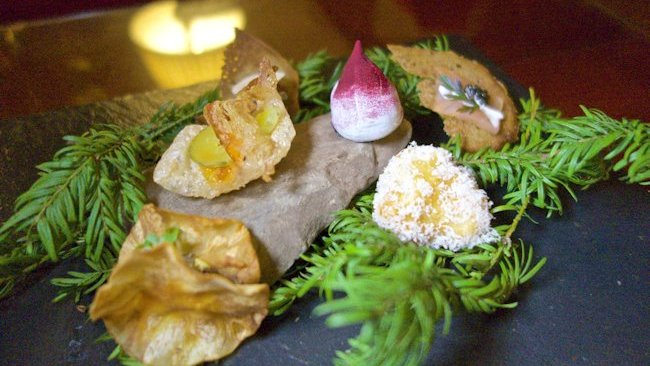 The canapés proved to be marvels of imagination and flavor. On the dark slate decorated with juvenile pine boughs was a dewdrop of meringue filled with a savory dab of foie gras. The other canapés were no less inventive. There were thin sheets of pork crackling, a beignet flavored with local Hafod cheddar cheese, beef tartar with oyster mushrooms, home smoked salmon topped with Ossetra caviar, duck eggs coaxed into a foam on top of celeriac crisps and, in my dirty martini, lovely Castelvetrano green olives spiced with sage, rosemary, thyme and chili powder.

The chef behind these adventuresome culinary morsels was Nick Brodie. With a motto of what is in season will be on the plate, every afternoon he walks through the greenhouse and gardens on the property to pick what he will use that evening. For my first dinner, he paired turnip greens and Brussels sprouts with a tender cut of beef topped with three single strands of perfectly crisped onion rings.

In the morning, I walked across the still wet lawn to the side of the property where Brodie has his raised garden beds, poultry pens and greenhouse. Here is proof of concept that Llangoed Hall is connected to the manor life of earlier centuries. As much as possible, the food served in the dining room comes from these gardens and pens. And what cannot be grown and raised on the property, Brodie looks to find locally from the farms, streams and markets nearby.

For a boutique hotel far from population centers, the twenty-three room Llangoed Hall has provided value-added reasons for travelers to journey into the country. Besides the quiet and beauty of the surroundings, guests are treated to white-glove service through out their stay. 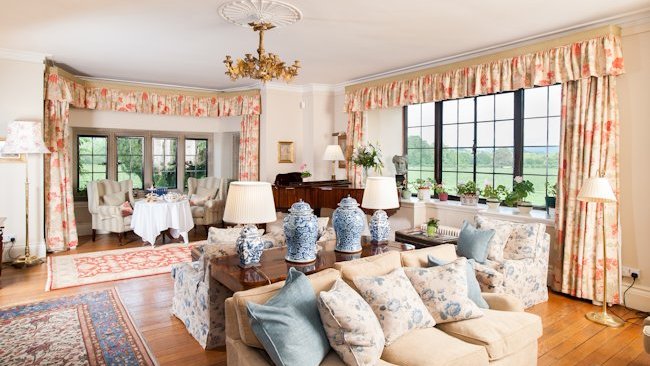 Named the hotel of the year in 2013 by the Automobile Club of the UK, the following year, the Sunday Times honored Llangoed Hall as the country house hotel of the year, 2014-2015. Aspiring as a culinary destination, chef Brodie’s kitchen with its careful plating and inventive recipes was anointed as the Condé Nast Travelers Johansens Restaurant of the Year, 2014.

To achieve that level of recognition, the hotel has been guided by managing director Calum C. Milne. Looking to continue the design intentions of the Ashleys, Milne found ways to mark Llangoed Hall as a cut above. Milne wanted his guests to experience an elegance enjoyed by earlier generations. Accordingly the china that is used in the separate breakfast, tea and dinner services was designed exclusively for Llangoed Hall and manufactured by Caverswall China, the company that also supplies the royal family.

A respect for Welsh traditions is reflected not only in the niceties of bespoke china, but also in the centuries old belief in self-sufficiency. Long before it became politically correct to embrace a small carbon footprint and locally sourced food products, Welsh farmers lived off the grid. Crops and livestock raised on farms supplied clothing, fuel and sustenance. That same approach, which seems like such a thoroughly modern idea, grounds Llangoed Hall in Welsh values, centuries old. 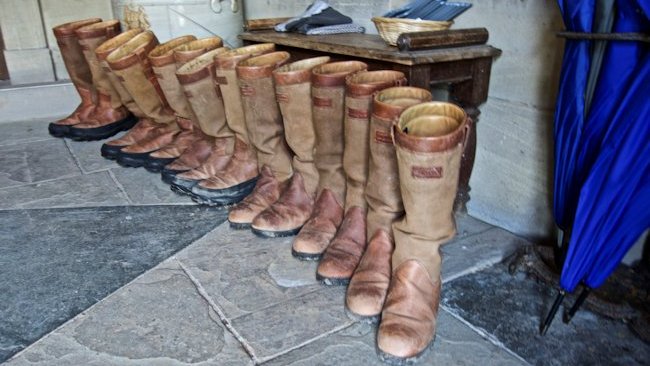 In the vestibule outside the front entrance there are two very meaningful details. A large container filled with umbrellas references that rain is a familiar part of life in Wales, although during my trip, the weather was delightfully free from rain and cold. The skies were so bright and sunny, I deeply regretted not bringing my sunglasses.

While I did not need the umbrellas, I was very happy guests were provided with Wellington Boots. Affectionately known as Wellies, they are protection against water, mud and animal droppings. For a walk in the countryside, I picked out a pair that fit perfectly.

To explore the local area, no car is required. The front desk has maps for self-guided walks across the surrounding meadowlands. Passing streams and ponds, the paths led through pastures where sheep and cattle graze. Approach too closely and an upturned look from our four footed friends suggests that they don’t mind our presence but it would be best if we did not linger and left them to eat in peace.

More adventuresome walking requires a car and driver who can navigate those narrow roads and roundabouts.

A brisk wind pressed against us as we walked across the Mynydd Illtud Common up to Pen y Fan, the tallest peak in Southern Wales. The exertion was worth the effort. From the promontory, we had a hundred mile view of the Brecon Beacons National Park.

For a completely different experience, we drove down into the valley. In the 19th and early 20th centuries, Wales was home to great iron ore and coal mines. Before the advent of railroads, those immense quantities were transported by means of a sophisticated system of locks and canals.

The days of that industrial development are long gone, but in many areas the canals have been preserved. For our next walk, we choose a stretch of the Brecon Canal that runs parallel to the River Usk. The walking and biking trails alongside the canals are a favorite of locals and visitors who enjoy the shelter provided by overhanging trees. Since the canals pass through the many small towns along the river, there are plenty of neighborhood pubs offering food and drink.

After so many pleasurable days exploring the area, on my last morning, I did not hurry to leave my room. In fact, I lingered on the sofa where I could look out the lead-framed windows to the meadowland and stream below. The red geranium potted plant on the windowsill was in full bloom. A thin layer of fog had settled on the damp grass. A knock on the door meant that a white-gloved attendant was delivering my morning pot of freshly brewed coffee and a double espresso along with the local newspaper.

At breakfast, the morning light gave the dining room a pastel glow Laura Ashley would have appreciated. A basket of freshly baked breads including chef Brodie’s buttery-light croissants and toasted slices of his densely flavorful seven seeded bread were served alongside eggs from the in-house chickens and salmon fished from Welsh rivers and smoked on the premises.

Before leaving, I needed one last walk around the property to say goodbye. Calves had gathered in the pasture just beyond the fence bordering the back lawn. They watched me as I took one last look at the grand façade of the building. I will never know what it was like to live in the world of Downton Abbey, but having stayed at Llangoed Hall, I had a taste of the comforts I imagined the Crawley family enjoyed on the best of their days. 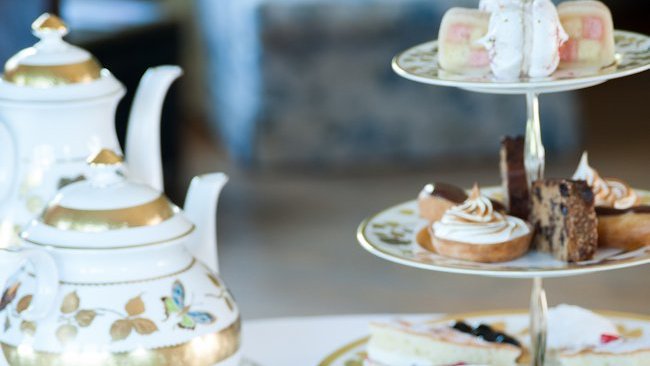