Lutetia, an Iconic Address on the Left Bank of Paris to Re-Open 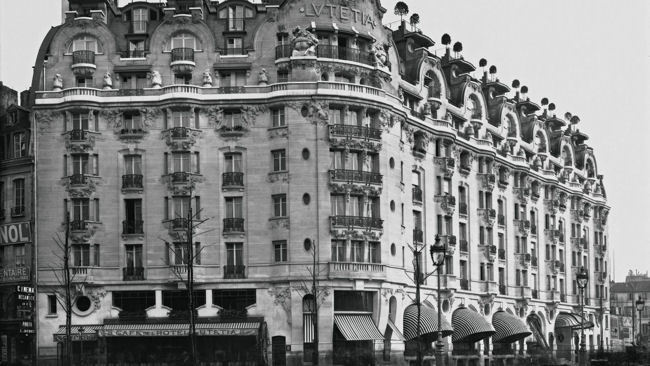 Located at 45 Boulevard Raspail, in the St.Germain-des-Pres area of the Left Bank, the hotel was originally opened in 1910 by the Boucicaut family, founders of Le Bon Marche. Acquired by The Set, known for their sensitive and transformative restoration of historical properties, the hotel was closed four years ago for an ambitious period of restoration and refurbishment that will return the property to its rightful place amongst the city’s Palace hotels and as the only Grand hotel on the Left Bank.

As Georgi Akirov, Chairman of The Set states “Lutetia is a magnificent hotel uniquely situated in Paris's fashionable St. Germain, it is quite simply the only grand hotel on the Left Bank, the much-loved area of the City of Lights. Our mission for this important project was to embrace the heritage of this iconic property, one that holds a special place in the hearts of all Paris, and marry it with our own contemporary spirit, a beautiful composition of the Old and the New. In this, we will make Lutetia one of the most sought-after destinations with an enhanced role on the Parisian hotel and artistic scene.”

The Set closed the doors of Lutetia in April 2014 and entrusted renowned architect Jean-Michel Wilmotte and his team to the restoration and renewing of the legendary Paris landmark with a brief to bring contemporary design to the hotel while preserving its heritage and unique charm. “Lutetia is an extraordinary, legendary site. To revive its splendour and make it a 21st Century hotel that meets the criteria of ‘The Set’, the Art Déco and Art Nouveau architectural elements from the past will be blended with contemporary design”. Jean-Michel Wilmotte

Lutetia will have 184 keys, spread over seven floors, including 47 suites. This figure is significantly reduced from the original total of 233, allowing for larger rooms and more convenient configurations. Seven signature suites, including a two-bedroom Presidential suite and two penthouse suites with private access to terraces as large as 70 sq. metres and boasting an unrivalled 360 degree view of Paris will be the crown jewels of this renaissance. Further information will be forthcoming regarding the illustrious names tasked with bringing their unique creativity to other signature suites.

A place to gather at the heart of the Left Bank

Lutetia’s 2018 opening will unveil a Jazz Bar, the Salon Saint-Germain, the Orangerie, a lounge and open-air courtyard - a new addition to the hotel and the Salon Crystal, all under the stewardship of Executive Chef, Benjamin Brial. Brial began his career at the Ritz in Paris and the two Michelin - starred Apicius before joining the Four Seasons Georges V at Le Cinq. Prior to joining Lutetia he worked internationally at the Four Seasons Shanghai Pudong, The Landmark Mandarin Oriental in Hong Kong and the Four Seasons, Ten Trinity Square in London.

In addition to these spaces, and in keeping with its history as a landmark in Saint-Germain society, the famous Lutetia Brasserie will be reopened under the care and attention of Gérald Passedat who currently holds three Michelin stars in France. He will bring his experience to the kitchen of the legendary hotel and be part of its culinary history. A third-generation family member at the helm of the Marseille landmark - “Le Petit Nice”, Passedat’s Cote D’Azur empire also includes the restaurants “Le Mole”, “Albertine” and “Villa La Coste” in Provence.

As General Manager Jean-Luc Cousty explains: “For decades Lutetia has been the living room of the Left Bank and soon the hotel, the Brasserie and all our beautiful restaurants and bars will once again welcome the beau monde of Paris and the world.” Cousty has spent many years of his career devoted to Lutetia, most recently as General Manager before its closure safeguarding the property before its extensive renovation.

Holding true to The Set’s vision of creating environments that are beautifully composed for contemporary living, Lutetia will include the ¬Akasha Holistic Wellbeing Centre, a 700-sqm. /7,500-sq. ft. spa, the brand already present within the Hotel Café Royal in London and Conservatorium in Amsterdam. Six treatment rooms will offer a huge array of the most sophisticated treatments and massages, a sauna, steam room, plunge pool, infinity edge Jacuzzi and large fitness room with state-of-the-art equipment will also be available. Bathed in natural light, a rarity in Paris, the 17-meter long swimming pool completes the experience.

An emblematic place of intellect, creativity and history

Since its opening in 1910, designed as a luxurious hostelry for the customers of the neighbouring Le Bon Marche store, Lutetia quickly became a place where the anonymous could be found alongside the famous, where art, philosophy, science and politics were continually created. This early success was interrupted by the First World War and later again in June 1940, when the city was occupied and the hotel requisitioned. In 1944 Lutetia resumed its intended role and on the orders of General de Gaulle became a crucial centre for displaced people and families seeking to be reunited with their loved ones.

The Left Bank is known for its nurturing of bold advances in literature, painting, sculpture and dance, and all of them found a home at Lutetia. Originally most associated with literature, just some of the historical and culturally significant figures who lived, worked and entertained at the hotel include Andre Gide and James Joyce who wrote "Ulysses" at the hotel with Ernest Hemingway acting as occasional editor, Samuel Beckett, André Malraux and Saint-Exupéry followed.

This was just as true for the other arts. Picasso and Matisse took up residence, Josephine Baker was a regular, and during the 50’s and beyond the hotel and its bar became a key part of the emergence and celebration of jazz. Also raising a glass in that famous bar were the hotel's new owners at the time, the Taittinger family. Like the famed champagne that bears their name, Lutetia became a favourite of a new generation of business, government and cultural leaders with Charles de Gaulle, François Mitterrand, Serge Gainsbourg and Miles Davis frequent visitors, Sonia Rykiel redesigning the property in the 1980s and David Lynch and sculptor Arman creating their own suites.

Today, as part of The Set, Lutetia will soon begin the next chapter in its illustrious history, regaining its position as an iconic hotel and centre of Parisian life.