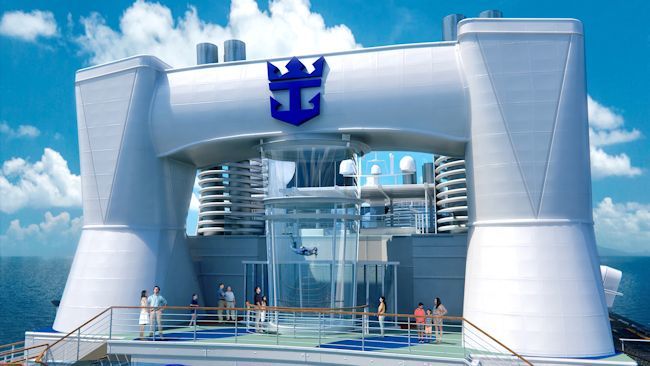 Thanks to more ports, ships, and on-board options, more and more people are giving cruising a try as it becomes more accessible worldwide. An estimated 20 million people went on at least one cruise in 2013, the Cruise Lines International Association (CLIA) says, and the organization, which represents 63 cruise lines, predicts that number could approach 22 million this year. According to George Argyropoulos of South African based Cruises International, here are six cruising trends to watch;

Crystal Cruises' has announced their newest perk to its All Inclusive luxury cruise experience: free Wi-Fi for Crystal Society members - the line's “club” of repeat guests. From September 2014, guests will be given 60 minutes complimentary Internet access for every day of the cruise. For years, connectivity on cruise ships has been spotty at best, with painfully slow Wi-Fi networks and exorbitant charges for even a simple email check. Nowadays, even those guests who take a cruise to disconnect from the world need to stay in touch with the home or the office from time to time. As we see Wi-Fi becoming an integral part to the cruise experience, cruise lines will also see greater integration of smartphone and iPad technology.

Last year saw a huge influx of new ships, including the New York-themed Norwegian Breakaway and the Royal Princess. Leading the hotly anticipated entrants in 2014 is Royal Caribbean's Quantum of the Seas. The Quantum class of ships is a new leap forward in vessel design with groundbreaking innovations like RipCord by iFly - the first skydiving experience at sea and transformational dining venues like the Seaplex and Two70° that morph from day to night. Add to these the North Star – a jewel-shaped capsule that gently ascends 300 feet (90m) above sea level – offering breathtaking 360° views of the sea and destinations, it's no wonder Royal Caribbean's Quantum of the Seas is one of most talked about new entrants in 2014.

A More International (and Younger) Crowd

The U.S. has long led the way in number of passengers aboard cruise ships, and that will continue to be the case. But we can expect to see an influx of Brazilian, British and German passengers as the industry starts to lure other nationalities, for both cruises in the Mediterranean and the Caribbean. In terms of first-time passenger growth, we see it coming greatly from younger generation travelers such as the Millennials (30 years old and younger). Not only are the first-time cruisers getting younger, but we see more and more multi-generational families sailing together to celebrate a significant milestone.

Traditional shore excursions and sightseeing will always have their place, but Argyropoulos says more-interesting off-ship activities are being added to itineraries, in part to appeal to the Millennial generation that is demanding of brag-worthy hands-on activities, as well as to appeal to the luxury clients who are becoming more adventurous and seeking unique experiences. Cruise lines are actively working to create experiences that makes guests say "that's going up on Facebook” says Jim Berra, head of marketing for CLIA. Active vacations at sea with extreme and soft-adventure excursions means longer stays in ports for added sightseeing and high-energy onboard facilities.

After a surge in sails around the Mediterranean, cruise lines are moving back to the Caribbean, where nearly 40% of worldwide capacity is concentrated. In Europe, fewer staterooms will be available this year as cruise lines have had trouble filling ships in recent years for a variety of reasons, including ongoing economic instability in the region.

To add to the Caribbean, hot destinations for 2014 also include Trans Pacific, U.S. Rivers, South America, Antarctic, Asia, Africa and Exotic Rivers. The addition of more exotic locations means a drive in new itinerary competition and cruise ship deployment. Ultra-luxe Crystal Cruises has crafted a titillating roster of new Crystal Adventures for 2014 Asia voyages. Monasteries, rainforests, royal residences, and tuk-tuks are among the 40 new shore-side outings showcasing both off-the-beaten-path port calls and major urban centers in Malaysia, Brunei, Myanmar, Indonesia, Japan, and India. Both Crystal Symphony and the recently-redesigned Crystal Serenity will be sailing 14 voyages in the region – twice as many as 2013. In all, the ultra-luxe line is offering nearly 200 Adventures throughout Asia, with options to book them with Private Car and Driver in most ports.

Luxury cruise lines include drinks and special restaurants, so drink and dining packages are mostly redundant. On those lines, the 2014 trend is to bring aboard more famous chefs for greater culinary variety. The Oceania Marina & Riviera have been fitted with the worlds first floating, hands-on cooking school, the Bon Appetit Culinary Centre, whilst the eclectic–and delectable–cuisine of world-renowned master chef Nobuyuki “Nobu” Matsuhisa is prepared by Nobu-trained chefs at Silk Road onboard Crystal Cruises.

“Our luxury cruise lines such as Seabourn and Azamara Club Cruises have significantly improved their value offering by becoming all-inclusive, offering a much elevated lifestyle experience on board, truly unique and hard to emulate experiences ashore, superb dining, high level-interactive lectures and presentations, high quality entertainment, as well as a choice of ultra-luxurious accommodation” says Argyropoulos. A luxury cruise may seem more expensive upfront but once one considers all the additional charges commanded by the contemporary and premium cruise lines the cost becomes very similar. Guests also seem to prefer all-inclusive rates not for the cost containment as much as for the convenience and the freedom of choice it provides.