Weekend Away: Paris in Springtime 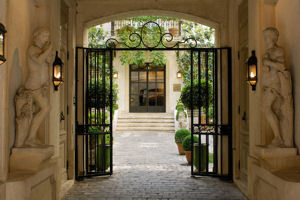 A few minutes and tight turns later, on a one-way street, I was welcomed to the Relais Christine. Large swinging doors opened into a courtyard, just a few short weeks from bloom. I wondered how many Parisians had entered these gates over the history of the building, carrying their daily baguette with cheese or fruit from the market.

Situated on the left bank, Relais Christine remains quiet while offering proximity to the best Paris has to offer. The morning after my arrival, I stepped into the Rue Christine only to discover a film being shot around the corner, my new neighborhood the backdrop for a movie production. Around the corner, a small plaque revealed the house as the location Picasso painted his famous 'Guernica' in 1937. A former Bond girl, wearing tall black boots, strutted past me. This was all in the first 5 minutes I left the door of the hotel.

The street was one of two new roads in Paris to be named after the royal children. Christine was born to Marie de Medicis and Henri IV in 1606. According to a period description, along the new street there had been built, 'a great number of spacious and handsome houses, so well designed and of such elegance.' It is one of these unique residences from the early 17th century that Hotel Relais Christine occupies today. Situated in the medieval heart of Paris, the location was also known to be part of an ecclesiastical site in the middle ages.

The staff ensured my comfort with their excellent command of English, and yet maintained the hotel's distinctly French charm. I was welcomed in both languages, and with respect for my short stay, brought immediately to my suite. The hotel winds up around a courtyard on all 4 sides, providing many views from the 57 rooms. My suite was a split-level on the street side, with original exposed wooden beams and large windows. Slanted ceilings confirmed the historical presence of the building, a type of authenticity that is impossible to fake.

A cozy sitting room hosted one of the flat-panel televisions. Antique wooden floors were a striking contrast to a modern bathroom, complete with his and hers sinks and generous products. After a long day of traveling, towels already warming on the rack and fluffy robes were much appreciated. Freshened up, the delightful managing director of the hotel, Jean Luc, directed us down the street to a bistro for traditional French fare. Calling ahead to ensure a reservation, we sat down to a red-checked tablecloth and waiters in ties and waistcoats.

Chez Fernand listed the day's specials on a black chalkboard and placed it near your table for consideration. While no English translation was present, the waiters offered descriptions in English with a reluctant smile. Although it took a few minutes to decipher the menu, I was glad to be surrounded by local French people, enjoying a Sunday afternoon meal with their family. Seared duck breast served over creamy mashed potatoes and a chocolate gateau were highlights of the meal.

The location of Relais Christine makes it simple to explore the café and boutique culture of Saint Germain. Spring provided the blooming backdrop for an afternoon wandering in and out of artisan shops, past historic buildings and sites, and along the Seine. Streetlife on a Sunday didn't quiet as the sun began to set. An excitement at the first days of spring was celebrated by long evenings at the café. As the city began to light up, intentions of visiting museums disappeared with the wine in my glass. Springtime in Paris is the ideal season to remain outside.

For its city center location, I was surprised at the offerings of the Relais Christine. It has many facilities that are unexpected for a small hotel blessed to be at the heart of a bustling city. I wasn't surprised when Jean-Luc reported that their garden suites were booked for the sunny April weekend I visited. Offering two ground-floor suites with private garden access, the Relais Christine brings the serenity of the countryside to the middle of the city.

Equipped with a table and chairs (where breakfast can be served at the time of your choosing while the birds chirp their morning song) and lounge chairs for relaxing after a day walking through the city, the garden suites were extraordinarily unique. These two rooms are reason enough for the high number of repeat customers who have remained loyal to the Relais Christine despite the amount of luxury hotels in town.

With accommodation options for different types of travelers, each room is individually decorated. Connecting suites overlooking the courtyard are available for families, providing comfort and space for children. The Relais Christine welcomes families with these accommodations, a spacious drawing room for a game of chess and larger tables in the breakfast room. Just as children are welcome in the cafés of the city, they are welcome at the hotel without disturbing the romantic atmosphere.

During a tour of the rooms, I was impressed by the amount of rare wooden antiques that served as the core of decoration. Often the resting place for a television, or beautifully carved desk in the corner, these pieces of furniture were a perfect complement to the contemporary warm tones and soft fabrics of the design. After commenting on these pieces, Jean Luc had a smile on his face. I enquired as to the reason. Long in the hotel business, he revealed the intentions of longevity for Relais Christine.

"Fashion always changes" Jean Luc commented as we looked around a classic slate-grey suite with wooden accents. "We all need to remodel, but some hotels, they went entirely contemporary. These pieces are classics." As the Relais Christine renovated, they went in a different direction from some fellow luxury hotels, with an eye towards the future. Relais Christine had managed to retain its charm through renovation, and incorporate the type of pieces that would only be found in the cities shops and markets. "People have come here for Paris." he concluded.

A small elevator and narrow hallways feels authentic to the historic building. Descending to the bottom floor of the hotel, I am pleasantly surprised by another facility unusual to a city center location. A spacious, dimly lit spa waits behind a wooden door where a sunken Jacuzzi, steam room and fitness area are available. The spa can arrange a classic treatment such as manicure or pedicure, or create the perfect hairstyle for a night out. Energizing massages and aromatherapy are all available by reservation.

Wanting to experience the facade of the city at night, we went for a stroll after dinner. Another perk of traveling in spring (or autumn) was the lack of crowds, and yet pleasant weather. Arriving in front of the Louvre, I was the only person enjoying the glow of the glass pyramid and light design on the museum. Turning my attention up the Champs-Élysées, I saw all the way to the Arc de Triomphe and could enjoy it with uninterrupted silence. Walking back to the hotel, couples had found their own private corners on bridges or fountains to steal a goodnight kiss.

After my first evening, I woke late. Not yet adjusted to the time change, the staff of the Relais Christine welcomed me into the breakfast room even though service had already been completed. Fresh orange juice, pastries, baguette and cheese were placed in front of me. A small pot of my own coffee, fruit salad and an omelette made to order came next. The breakfast room is downstairs in the original 13th century kitchen, and we ate next to the original hearth decorated with antique cooking tools.

Experts on the different areas of Paris, I began my 2nd day with a map full of suggestions from the helpful staff. The central location once again came in handy to drop off bags after shopping. Strolling past La Sorbonne, with its trendy students and full cafés, I found myself at the blooming Luxembourg Gardens. Magnolia trees scented the garden, and Parisians were reading the newspaper over a cigarette, in no rush to return to work. The most difficult decision of the day was where to sit down for lunch.

We chose a brasserie with tables in the sun. Foie gras arrived with a generous salad, dressed with a spicy mustard sauce. A basket of crisp baguette was dropped onto our table casually, with glasses of cold white wine. Cod was seared perfectly and served over a ratatouille bursting with freshness. Periodically, the chef with round belly emerged from the side of the building to come outside for a cigarette. The sun was descending behind a building just as we finished our café au lait, and a walk back to the hotel reenergized us after a lazy afternoon.

After a dinner party with friends that brought us to stroll the streets of a different arrondisement, we lowered the electronic blinds and settled into our cocoon of silence in the middle of the still bustling city. A fog had settled over Paris, and the next day it was due to rain. We had luckily spent two days wandering around The Latin Quarter, Ile Saint Louis and the Bastille. And while it was lovely to have the sun shining, spring showers provide an excellent justification for extra time spent shopping in some of the nearby boutiques.

The hearty breakfast of the Relais Christine was bustling on the 2nd morning, with children enjoying cereal next to women in pearls sipping coffee. This first meal prepared me for my train ride to Bordeaux, a quick three hours on the high-speed rail that would be the 2nd destination of my grand tour. I had already experienced the city life, atmosphere of observation and cuisine that has come to define France. The next stop would bring me to the heart of French wine country, where (debatably) the best worlds in the world are produced.

Respectful of my 48-hour time span to appreciate Paris in the springtime, the staff of the Relais Christine helped to maximize my short stay. Restaurant recommendations, a few x's on a map, and small touches such as advising us to leave the bags in the room on the morning of departure (to be stored until our train time) all made the task of exploring the city a touch easier. My bag bounced over the cobbles as we left the grand courtyard behind, vacating our suite for the next guest to find a view of Paris they could call their own.

Getting There: Situated on the Left Bank, Relais Christine is easily accessed by a taxi or served by multiple nearby Metro stops.

Where to Eat: Chez Fernand, Rue Christine. Serving traditional French cuisine, with a wine of the week and daily specials on a blackboard, this restaurant has an endearing snooty quality.

What to Do: Steps from Notre Dame, Pont Neuf and Boulevard St. Germain, Paris is your oyster from the door of Relais Christine. Wander along the Seine for antique books, take a stroll to the Louvre, or join the masses at a tableside café along Rue St Andre Des Arts or Rue de Seine.
Like Us
Facebook
Follow Us
Twitter
Follow us
Instagram