Jet Off to a Private Yacht Vacation in the Exumas Bahamas 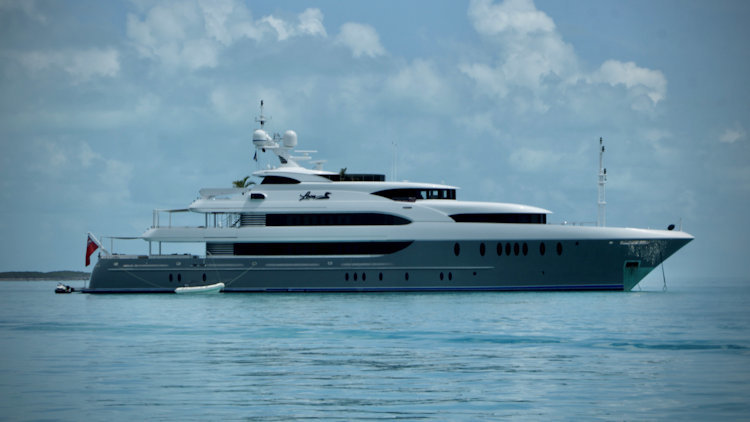 A significant discovery by many execs during the pandemic was that private jets aren’t necessarily for business only. The good people at Magellan Jets jets saw their business rise 58 percent over 2019, itself a record year for them, as families desperate for lockdown relief took to the skies for havens that take socially distancing to a whole other level, in a good way, like the Exumas in the Bahamas, a series of remote islands a couple of hundred miles from the nearest subway stop. 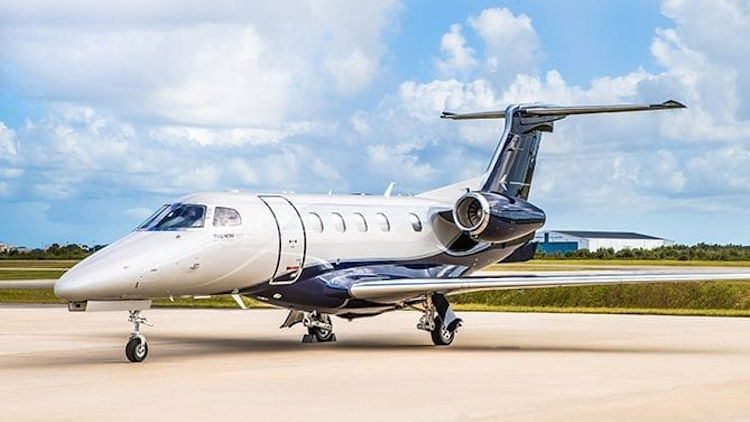 Catch a flight out of Boston and Fort Lauderdale to winter destinations like Aruba, Barbados, Cayman Islands, Cuba, Dominican Republic, Leeward Islands, Trinidad & Tobago, Turks and Caicos, U.S. Virgin Islands, Windward Islands, Bermuda and, all year round, the Bahamas where your pleasure ship awaits – the Loon.

From stem to stern she’s 180’ with walls of lacquered cherrywood, tasteful muted tones, pile carpet and elegant marble floors. She accommodates up to 12 guests in six spacious cabins with the main deck full beam master including a Jacuzzi and separate shower. On the lower deck are four large ensuite cabins for two. The sixth and final cabin is an extra single located just aft of the master. And if it’s just the two of you, the pair aft cabins can be joined to create a single luxurious VIP suite with a queen and king bed. 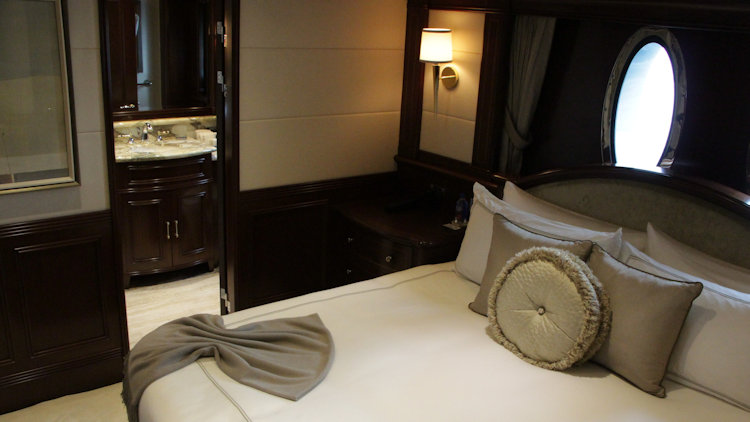 The sun deck includes shaded lounge seating, Jacuzzi, barbeque and a four-person sunbed. And when you’re through lounging around, take to the water with a seemingly endless selection of gear including matching Yamaha Waverunner jet skis, Seabobs, Lift e-foils and stand up paddle boards. Other options include a flyboard, water slide, water skis, junior water skis, wakeboard, inflatable kayaks, snorkeling and 12 sets of scuba equipment, spearfishing gear, kitesurfing gear, fishing equipment as well as tons of water toys for the kiddies.

And if you prefer to keep dry, there are free weights, yoga, bands and balls for an onboard workout. But if you’d rather burn no calories at all, there are board games, jigsaw puzzles and a menu listing hundreds of movies to choose from in your own private screening room.

Your talented crew of 14 includes a professional surfer, pro kite boarders and divemaster who will escort you to a vibrant tropic underwater world populated by barracuda, reef sharks, sergeant majors and the invasive lionfish. The Exumas is a shallow playground where cruise ships cannot venture, making it ideal for private yachts. So hop aboard the 43' Everglades towed tender, or the 21' Novurania, for some of the richest underwater exploring in the Caribbean. 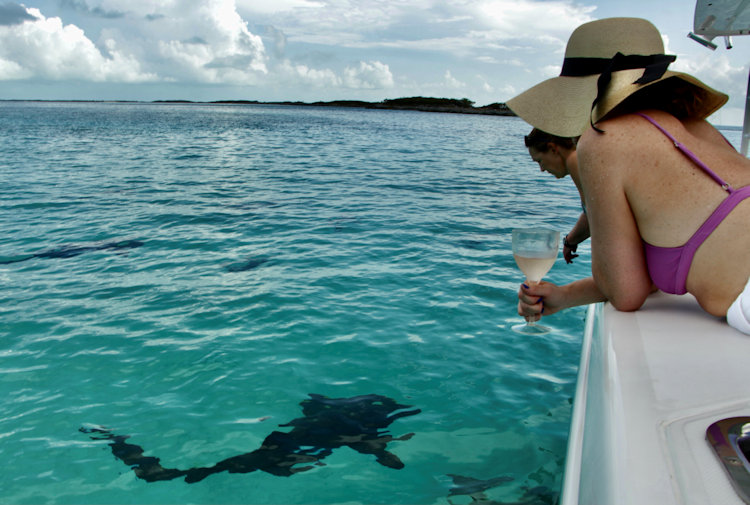 If you’re not certified, you can still hit Staniel Cay to snorkel the plane wreck of one of Pablo Escobar’s drug runners. It was discovered in the 1980s, a day after it crashed ten miles from its destination – the airstrip at Norman’s Cay. Inside it was packed with marijuana and two dead pilots. From the surface she’s less than impressive, just some steel skeletal bones piercing the water at the breakpoint in the fuselage. Once you dive in, you’ll find much of the structure intact, allowing you to swim the length of the plane from within, or explore the wingspan of the World War II craft resting on the sandy bottom.

Sure it gets busy, but the Thunderball Grotto is a must. It’s where Sean Connery carried out that full-scale underwater assault against the forces of SPECTRE in the 1965 Bond classic that gives the grotto its nickname. Swim between the rocks into an open cave-like area, where the garden below is teeming with life and the ceiling above is a bit too tight. Through a groove pass into the pool of the grotto, domed like a cathedral, with two perfectly placed skylights illuminating breathtaking natural beauty, colorful parrot fish, coral and angelfish. And if you’re feeling your oats, you can swim out to the beach, hike to the top of the rock, and hurl yourself through 40 feet of shadow into the turquoise pool below. 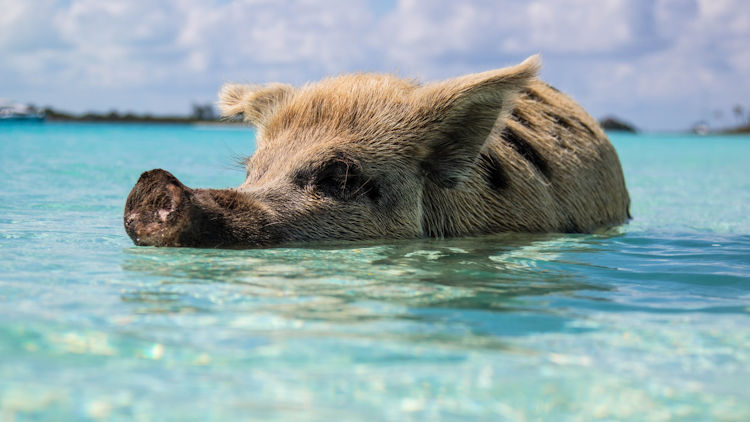 Stop for a pig, now. How the sows and boars got to Big Major Cay, otherwise known as Pig Island, is a bit of a mystery. Were they set loose by a group of sailors to provide protein for return visits? Are they the survivors of a shipwreck? Are they migrants from a local island? Or were they stocked in the 1990s by residents of nearby Staniel Cay? The sound of the boat summons them not just to the beach, but into the surf where they blithely paddle their way out in search of a celery stalk or carrot. While they're large and can appear intimidating, the pigs are good company and won't force the issue if you're empty handed.

In fact, they’re a bit less pushy than the iguanas over on Bitter Guana Cay (Iguana Island). Like the pigs, they hear the skiff and come flopping their way down the beach for a snack. Grapes on a wooden skewer are their preferred comestible, but they can be a little eager, and might draw blood in the process. 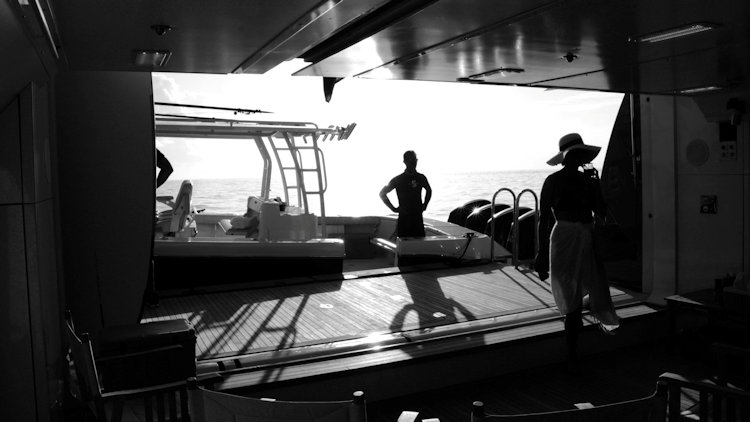 Of course you’d be mad to try to do it all in one day, but you don’t have to. For a mere $300k, you have the Loon for a week. So take breaks back on board for specialty cocktails prepared to your liking, and meals to match your tastes. A preference form is offered ahead of time, affording the chef and his team all the info they need to prepare bespoke meals made to your specifications.

The Exumas are an ideal playground, but it’s the getting there that makes this trip special. From the easy in and out at Jet Nassau in the Bahamas, with the good people at Magellan graciously handling paperwork, to the Loon itself, providing the comfort and luxury of a five-star hotel with the ocean under your feet, there’s no better way to reward yourself for the hardships of the past year. 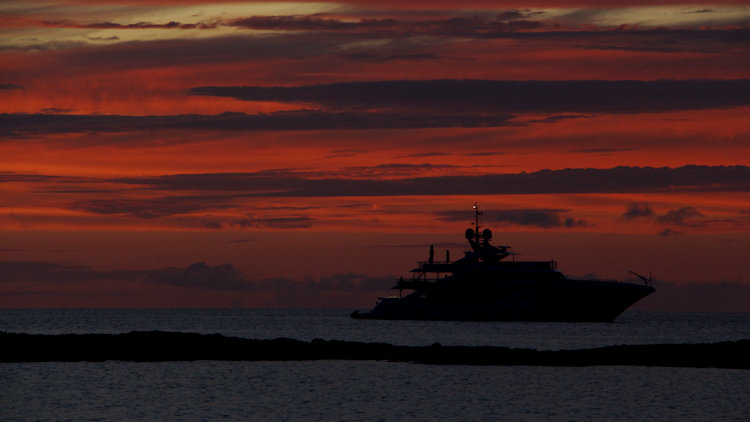