Magic and Mystery in Marrakech at La Mamounia 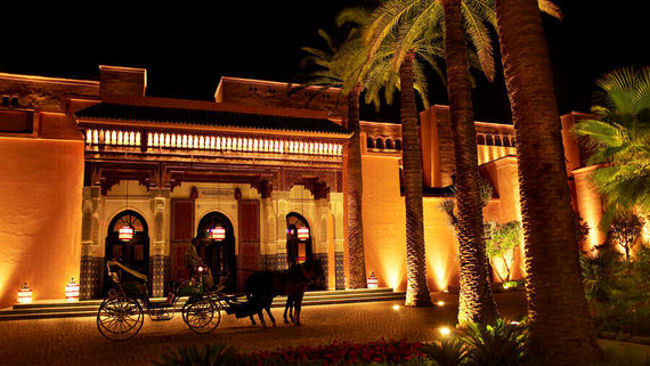 At its heart is the great square of Jma al Fna, meaning literally 'The Place of Execution', a spot where the seed of the city fell centuries ago. Behind it sprawls the twisting labyrinthine lanes of the medina, the old city, packed with the frenetic potpourri of life that has changed little in a hundred years or more.

Every month Marrakech seems to boast more and more hotels. Most of them accommodate the droves of package tourists who jet in on low-cost charters, blinking and bewildered, from destinations across Europe and beyond. The majority are rather ramshackle places, devoid of good service or real luxury.

But everything changed recently when La Mamounia, the kingdom's most iconic hotel, reopened its doors after a staggering renovation that cost more than $140 million, and took three years to complete.

In its heyday of the 1920s, the Mamounia ranked along the other greats of the hotel industry, like Singapore's Raffles, The Peninsula Hong Kong, or Mumbai's sumptuous Taj Mahal Palace. Sir Winston Churchill, who regarded the place as a fragment of paradise, would winter there, and famously lured President Roosevelt to stay and paint after the Anfa summit during World War II.

But as the decades passed, the sparkle faded, partly due to a botched renovation during the 'eighties. The result then was a rather forlorn place where you had to squint hard to glimpse how it must once have been.

The first thing you notice about the renovated Mamounia today is that there's no sign. It's almost as if you don't deserve it if you have to ask directions, just you can't afford it if you have to ask the price. The painstaking renovation was planned and executed by Jacques Garcia, the celebrated French architect. And what miracles he's performed. 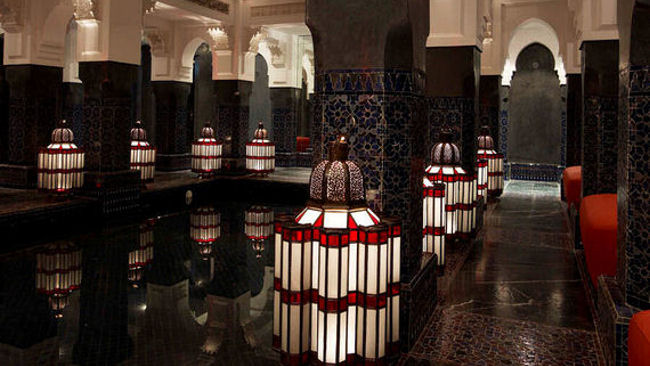 Opening the hotel up on its axes, Garcia improved the symmetry, by constructing an Andalucian colonnaded courtyard, with a reflective pool of crystal clear water, and a glorious geometric pavilion at the front. There's something so alluring about the place, as if it beckons you up the gray marble steps inset with slivers of mosaic, into the palatial surroundings inside.

The ambience is a little somber, low-watt bulbs, the scent of expertly-tanned leather, lavender and musk. Newly-arrived guests are greeted with the most succulent dates imaginable, and with creamy milk – the traditional hospitality offered to visitors by the desert Touareg tribes.

From the first moment, it's the detail that stands out. Wherever you look, Moroccan crafts are on display in their finest form. The walls are adorned with zellij mosaics and intricately carved plasterwork, the ceilings concealed in geometric cedar marquetry, the marble floors awash with exquisite rugs.

Amble through the long corridors, and it's easy to imagine once again the celebrity that's been wooed by it all in decades gone by. Charlie Chaplin and Omar Sharif, Nelson Mandela, Charles de Gaulle, and the Rolling Stones, just the tip of a celebrity iceberg. Alfred Hitchock even filmed parts of The Man Who Knew Too Much in the hotel's lobby. 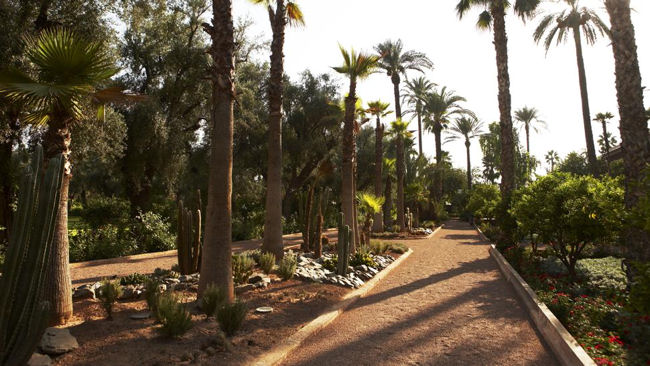 Named after 18th century Prince Mamoun Bin Mohammed, the hotel's land was awarded as a wedding gift to him. And it's the eight-acre gardens that still provide the most seductive backdrop to the Mamounia today. Beyond them, brimming with desert palms, cacti, hibiscus and acacia trees, lie the ancient pink walls of medieval Marrakech.

As with the hallmark of true luxury the world over, the service is both understated and jaw-droppingly good. Almost every member of staff I encountered addressed me by name, from the lobby manager to the pool attendant. When my starched linen napkin accidently slipped off my lap in the Michelin-starred French restaurant, a replacement was ushered over as if by magic. And when, on my first visit, I casually mentioned my liking for a particular vintage of Champagne, I was more than pleased to find a bottle chilling in my room, then second time I came to stay.

In winter, the suites and rooms open out onto the gardens, with a backdrop of the snow-clad High Atlas Mountains, as the greatest magic of all. It's the panoramic landscape that had stolen Churchill's heart. (His 1948 painting entitled Marrakech, presented to President Truman, fetched £468,500 when it sold at auction a some three years ago). 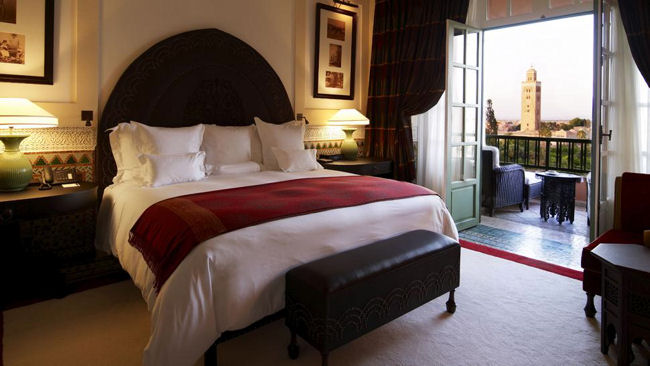 The rooms are spacious, decorated with traditional Moroccan crafts, but not over so. The emphasis is very much on the notion that less is more, while the craftsmanship and the materials used are the very finest available. The attention to detail is breath-taking. And, the guest's every need has been anticipated.

La Mamounia boasts three main restaurants, as well as a poolside pavilion, where breakfast and light meals are served. "Le Morocain" is nestled away in a riad, a courtyard masterpiece of symmetry and geometric design, in the heart of the palace's gardens. Set over three floors, it commands views out on the surrounding area, and offers extraordinary cuisine, a blend of traditional and modern flavors. In a land where local people believe the best Moroccan dishes are served in the home, the restaurant in the exception to the rule.

The hotel's French restaurant, "Le Francais" is adorned in muted colors, is gentle to the eye, a reflection of the subtle cuisine created by master chef Jean-Pierre Vigato. Regarded as one of the finest French restaurants outside France, the focus is on perfect ingredients, and an execution of cuisinary craft that would impress even the most discerning Parisian. A stone's throw away is the "L'Italien", the hotel's third great dining experience. Again, the ambience is warm and inviting, sumptuous colors and textures, and a cuisine prepared by master chef Don Alfonso, using organic vegetables gleaned from the hotel's own gardens. And, needless to say, each of the restaurants profit from the hotel's extensive wine cellars, the sommeliers on hand to advise the perfect choice. 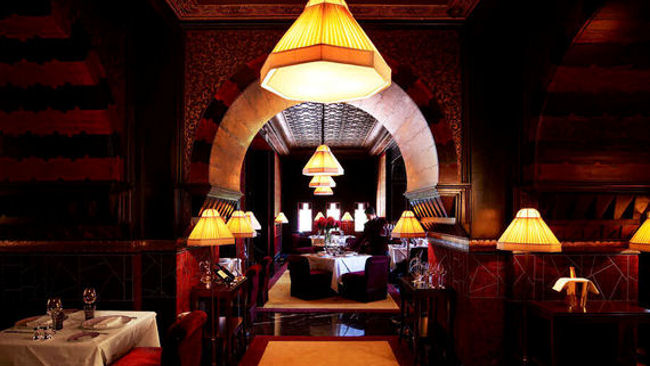 After gorging oneself in one of the restaurants, or in the quiet comfort of one's suite, what better than to take advantage of a little pampering in La Mamounia's spa? Possibly the most indulgent area of all, the 27,000 square foot palace of pampering offers every imaginable treatment, from the traditional Moroccan hammam, to all manner of massage and grooming treatments.

For me, the test of true luxury is how an absence from it plays on the mind once you no longer have it in your grasp. Leaving La Mamounia, the most exalted haven of understated decadence, and going out into the real world again, can be harsh – if not a little distressing. When I was there last week, indulged beyond all reason, I felt crushed at having to go on my way. The suave and hospitable general manager, Didier Picquot, must have seen the look in my eye. "It's hard to leave it? Isn't it?" he asked sensitively. I nodded bleakly. "Do not fear, Sir," he added, "I'm sure your feet will soon return here. After all, La Mamounia is your new home."