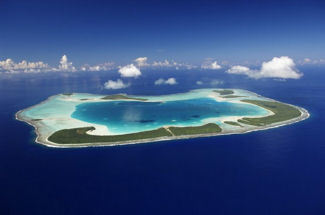 A product of the late Marlon Brando's vision, construction on The Brando has officially begun with completion slated for late 2011. Construction of the luxury eco-resort has commenced with the official authorization from the Tahitian government after several years of studying the impact of construction on the environment.

Construction of The Brando began with the building of a platform on the coral reef to provide logistical access to the island without causing environmental damage. Additionally, the old airstrip is being refurbished and extended to meet the government's safety standards.

The exclusive resort will be the only hotel on Tetiaroa, the former playground of Tahitian Kings in French Polynesia's idyllic islands. Purchased by Brando in 1965, Tetiaroa is a 13-island chain circled by a coral reef offering a tranquil and pure paradise 35 miles from the island of Tahiti. The Brando is a product of Brando's vision to create a project which will resonate with visitors and also foster opportunities for guests to get to know both the place and the people of French Polynesia.

The project is being overseen by Tahiti Beachcomber SA, whose CEO, Richard Bailey, owner of several luxury resorts in French Polynesia, was a good friend of Brando's and had been working with him for many years to fulfill their joint vision to develop an environmentally sustainable resort. Bailey has experience with other sustainable projects in French Polynesia as he owns four InterContinental resorts in the region, utilizing eco-friendly practices.

Brando had many ideas for how to create an eco-friendly resort, and Bailey is working with the Brando estate to implement these visions. The hotel will operate with a "sea water air conditioning" system (SWAC), which draws on an inexhaustible supply of completely renewable clean energy and has zero impact on the environment. Bailey plans to use a deep-sea pipe to pump cold water from the depths of the ocean, which will then be used to chill the air in the hotel -- the same system he developed and is successfully in place at InterContinental Bora Bora Resort & Thalasso Spa.