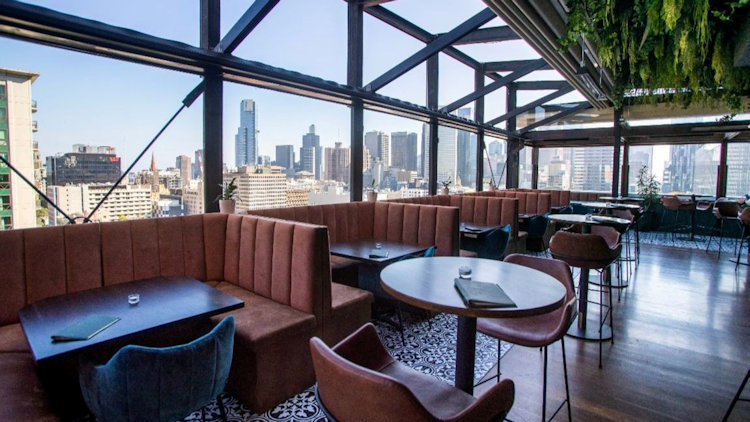 Following a hugely successful year since opening in November 2021, Melbourne CBD’s highest rooftop bar Fable Melbourne welcomes the summer season with new menus, an all-new bottomless rooftop brunch, and a NYE event boasting some of the best views in the city to take in the City of Melbourne’s extra impressive fireworks display.

Fable’s summer menus are entirely Gluten Free, Vegan friendly, and include an array of new dishes perfect for warmer weather.

“Our new summer menu is hyper seasonal and light, with more raw items, such as our beautiful XL King prawns from South Australia mixed raw with cucumber, onion, tomato and peppers to mimic the flavours of a greek salad, cooked gently with lime juice and finished with a punchy oil made from the heads of the prawns. We also have some more playful dishes that transfer to our late night menu, such as crisp cauliflower nuggets with green garlic and daikon, which is both gluten-free and vegan,” says Fable Melbourne Executive Chef Alex Xinis.

Other summer menu highlights include Beetroot carpaccio with candied cashew, tarragon and sour cherry with stracciatella (or cashew cream as a vegan option); Pea ‘quinotto’ (quinoa risotto) with feta, aleppo and flash fried snow peas (vegan); Fable’s own Potato hash with spring onion and dijonnaise (vegan); and a new twist on their Burrata, now with marinated zucchini, red pepper and kalamata olives. Fable’s food and drinks menus will always be entirely Gluten Free.

The new summer food menu is complemented by a range of masterful cocktails inspired by European mythology and moments in history, including a full page of alcohol-free options, several pages featuring twists on classic martinis, and an extensive list of spirits, beers and wines.

The cocktail menu is entirely dairy and egg free: vegan apart from the use of honey in select menu items.

“Over the last six months or so, we have noticed patrons are more and more open to experimental cocktails with ingredients like mezcal and Pisco, which has been really positive for us,” says venue manager and lead mixologist Alessandro Nardini.

“This summer we are introducing more alcohol-free cocktails due to the continued demand, as well as some new tequila cocktails and a smoked white port martini. In January we will begin to offer tasting flights in partnership with different spirit brands, including a new range of raicillas matched with cheeses,” says Alessandro. Raicilla is a Mexican agave spirit that is becoming increasingly popular worldwide.

Owner and designer Gehan Rajapakse (Sofitel, Hyde, Rah Bar, Club 23, Crown Casino) has secured Fable’s rightful place as another Melbourne institution. As the CEO of precog.finance, a decentralised AI-assisted crypto trading platform, Rajapakse also laid the groundwork for Fable to now accept crypto currency payments, making it one of the first bars in Australia to do so.

Fable Melbourne is open from 5pm-12am from Monday to Wednesday; 5pm-1am on Thursdays; 3pm-2am on Fridays and Saturdays (Saturdays open between 1pm-2am from 10 December); and 3pm-1am on Sundays. Aperitivo is served from 3pm-5pm Friday to Sunday, with the Fable Rooftop Brunch with DJs and live entertainment on Saturdays from 1pm-3pm.