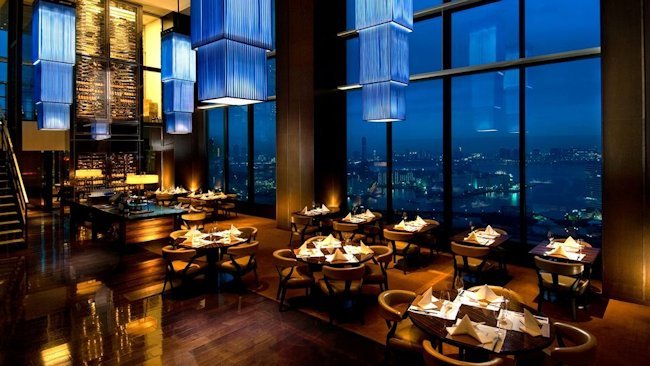 Waldorf Astoria and Conrad Hotels have consistently been recognized for its high standards of culinary excellence. Below are just some of the restaurants which have achieved this culinary badge of honor.

The three starred Michelin-rated rooftop restaurant La Pergola is the only restaurant in Rome to be accorded such an honor. The famous menu is accentuated with a wine list that comes from a cellar with over 53,000 world-class bottles, a water list featuring 29 choices, authentic Italian oil and balsamic vinegar from the best local producers and the finest Mediterranean-sourced produce. Under the direction of celebrated Chef Heinz Beck, it is unanimously recognized as the “Best Restaurant in Rome” and one of the top four in Italy.

China Blue is one out of only six Chinese restaurants selected in the 2013 Michelin Guide. The award of a Michelin star for the sixth year in a row confirms Chef Albert Tse's expertise of gourmet Chinese cuisine in Japan. The Guide recognized the avant-garde Chinese restaurant's distinctive blue-lit interiors and stunning views of Hamarikyu Onshi Teien Garden and the Tokyo Bay area.

The Caledonian, A Waldorf Astoria Hotel, is home to two inspired eateries - The Pompadour by Galvin and Galvin Brasserie de Luxe - from the renowned Michelin-starred Chefs Chris and Jeff Galvin. The two distinct restaurants continue the successful partnership between Hilton Worldwide and the Galvin brothers, who run the Michelin-starred restaurants.

Les Solistes is a stylish Michelin-starred dining establishment in Berlin that offers a dining experience that reflects Berlin's zeitgeist persona and the unique essence of Waldorf Astoria. Chef Pierre Gagnaire adopts a modern approach to classic French cooking technique, artfully preparing dishes using the freshest ingredients. One of the most vaunted restaurants to eat in the French capital, Les Solistes offers guests a modern gourmet restaurant with a relaxed atmosphere.