Time Travel: Exploring the Land of the Pharaohs 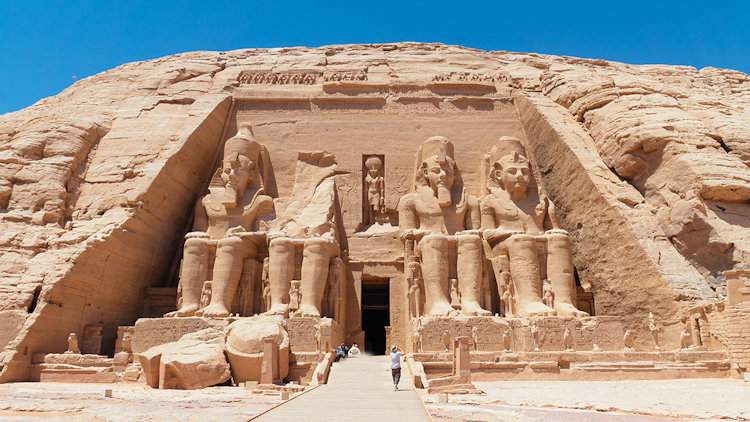 Travelers as far back as the Greek Herodotus (c. 450 B.C.) have journeyed to the banks of the Nile, drawn by its mysteries, fascinated by its concept of eternity...

Everywhere in Egypt excavations are underway. Antiquities are unearthed—layer upon layer peeled back, desert sand swept aside to reveal an ancient civilization that calculated not in centuries, but in millennia. Travelers as far back as the Greek Herodotus (c. 450 B.C.) have journeyed to the banks of the Nile, drawn by its mysteries, fascinated by its concept of eternity. But experiencing the Egypt of the Pharaohs requires another sort of "excavating," one built on careful planning.

Since time immemorial, Egyptians have crowded along the Nile — a mere seven percent of their land inhabitable. The rest is a desert so parched it defies imagination. Throughout its history, each successive wave of arrivals (Nubians, Persians, Greeks, Romans, Arabs) built upon and absorbed earlier cultures. The process has left most modern Egyptians only tangentially connected to their ancient past. Locals appear genuinely bemused but prepared to capitalize on foreigners' interest in ancient pharaohs and forgotten deities. The result can be as confusing and disorienting as Cairo traffic.

As first-time visitors to Egypt, my husband and I want our holiday to include a visit to the pyramids and a cruise down the Nile. Faced with the decision of a hotel in downtown Cairo or staying near the pyramids in neighboring Giza, we choose the latter … and are thrilled! Our Victorian-style room in the main building of the Oberoi Mena House provides a breath-taking view of the pyramids. The Mena House grounds are a welcome oasis of greenery and quiet. Those in search of bustle and night-life might consider the Four Seasons at Nile Plaza in Cairo. The Oberoi Mena House is a step back in time.

We spend our two days in Cairo at the pyramids and the Egyptian museum. Although the entrance to the pyramids is only a short walk from the hotel, we opt for a house-drawn carriage tour. We're told the site is too extensive to explore on foot but soon discover that this is not the case, at least for the fit. What is true is that if you do not employ a local (either as guide, carriage driver, camel driver, etc.) you will be barraged by those offering a range of services including having their picture taken with you — for a fee! Our driver gives us a series of warnings and glares away a good percentage (but not all) of his competition.


This is the dilemma of an Egyptian holiday. If you "go it alone," you must be prepared to fend off those who make their living selling to tourists. We are thankful that the Oberoi Mena House concierge is anxious to give us a different experience. We return to the pyramids that evening for a Light and Sound show. The excursion, organized by the hotel, runs smoothly and we find ourselves drawn into the magic and majesty we've come so far to find.

A day later we take an Air Egypt flight to Aswan to begin our six-day Nile Cruise on the Oberoi Philae. Nearly 300 vessels cruise the Nile. Many make the trip from Aswan to Luxor in under three days (the cruise can be taken in either direction), but the Philae recreates an earlier era of leisure and service. The staff is welcoming and gracious, providing a lasting impression of Egyptian hospitality. The 12-year old Philae is built to resemble an old paddle-wheel steamer. The common rooms are wood-paneled. The windowed, high-ceiling dining room is accessed down a grand sweeping staircase.


After a brief freshen-up, we assemble with our fellow guests in the lobby and meet our guide, Tarek Ibrahim. Twelve of us will be in Tarek's capable hands for all the cruise excursions, and it is immediately evident that he is passionate about his country and its extraordinary history. Tarek's English is flawless, his personality engaging, and (we soon discover) his knowledge encyclopedic. In Egypt your guide is your “excavator” and through him (or her) each site is brought to life. The Oberoi hires the best, and ensures the transportation staff is of equal quality.

The six-day Oberoi cruise allows us to visit a range of sites in and around both Aswan and Luxor. Our time is filled with excursions, fine dining (the Egyptian buffet is our favorite), and relaxing on our cabin's private balcony as we watch life on the banks of the Nile drift slowly by. We visit the Philae Temple by motor launch, the Botanical Gardens by felucca (a Nile sailboat whose design hasn't changed since ancient times). We travel by bus to the Aswan Dam, the Unfinished Obelisk, the Temple of Horas in Edfu, and of course, the Valley of the Kings. Tarek and the Oberoi staff even arrange extra excursions for us — a carriage ride through the Luxor market, a visit to the temple of Hatshepsut (Egypt's only female pharaoh), and a spectacular dawn hot air balloon ride over the Valley of the Kings.


We leave Egypt with a renewed sense of awe. Our time here has revealed the complexity, the skill, the majesty of the ancient world — a perspective that can only be gained by experiencing ancient treasures first hand. It is a trip of education and contemplation made possible by staying in luxury accommodations and being escorted by a top-rate guide. There are other vacations to be had in Egypt — night-clubbing and shopping in Cairo, scuba-diving in Sharm-el Sheikh. But to discover the land of the Pharaohs, there is only one way to go — first-class with Oberoi.