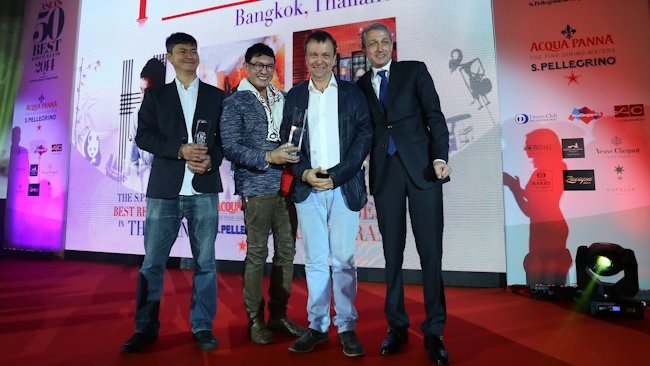 At Nahm, Australian-born chef David Thompson celebrates the bold flavors of authentic Thai cuisine by reviving and reinterpreting centuries-old recipes of former Thai matriarchs. Ranked No.3 at the inaugural Asia’s 50 Best Restaurants awards last year, the restaurant gained global attention when it first appeared on The World’s 50 Best Restaurants list in 2012 at No.50, jumping to No.32 a year later.

The 2014 list welcomes 10 new entries, including Issaya Siamese Club in Bangkok debuting at No. 31, and first-time representation from restaurants in Korea (Jungsik, No.20), and Taiwan (Le Moût, No.24).

Amber (No.4) in Hong Kong earns the title of The S. Pellegrino Best Restaurant in China. New additions to China’s rankings include Family Li Imperial Cuisine (No.46) in Shanghai and Tenku RyuGin (No.50) in Hong Kong.

Narisawa (No.2), the inaugural winner of Asia’s 50 Best Restaurants 2013, takes the title of The S.Pellegrino Best Restaurant in Japan for a second year. Japan boasts the most new entries with three Tokyo restaurants making their debut, namely L’Effervescence (No.25), Sukiyabashi Jiro (No.38) and Sawada (No.41).

India is well represented on the list with six entries. Bukhara (No.27) leads the contingent, securing the title of The S.Pellegrino Best Restaurant in India.

Chef Lanshu Chen of Le Moût in Taiwan has double reason to celebrate: aside from Le Moût entering the list at No.24 and securing the title of The S.Pellegrino Best Restaurant in Taiwan, Lanshu is named Veuve Clicquot Asia’s Best Female Chef.

Other award winners announced include:

Asia’s Best Pastry Chef, sponsored by Cacao Barry: Janice Wong
For a second consecutive year, Janice Wong is the recipient of this prestigious award. Owner of 2am: dessertbar in Singapore, Janice draws inspiration from her travels in Japan, Hong Kong and Singapore, presenting impeccably-styled desserts and artfully combining unexpected flavors.

The winners’ circle also includes Ivan Li of Family Li Imperial Cuisine in Shanghai (No.46), who is the worthy recipient of The Diners Club® Lifetime Achievement Award.

Asia’s 50 Best Restaurants list is created from The Diners Club® World’s 50 Best Restaurants Academy, an influential group of over 900 international leaders in the restaurant industry, each selected for their expert opinion of the international restaurant scene. The Academy comprises 26 separate regions around the world. Each region has its own panel of 36 members including a chairperson to head it up. The panel is made up of food critics, chefs, restaurateurs and highly regarded ‘foodies’, each of whom has seven votes. Of the seven votes, at least three must be used to recognize restaurants outside of each voter’s region. At least ten panelists from each region change each year. None of the employees of any of the sponsors associated with the awards, including the main sponsor, votes or has any influence over the results.