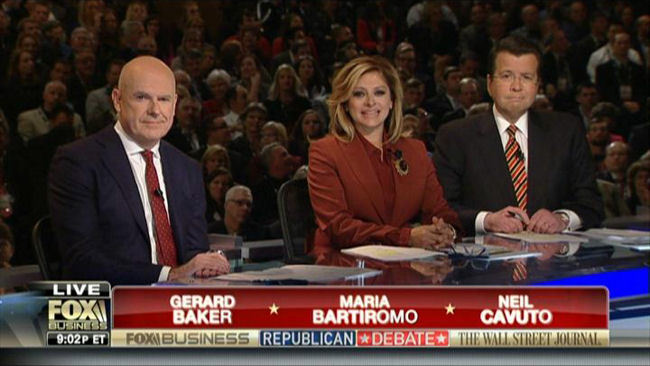 You've been called the best interviewer by many people, so it's an honor to interview you. What are the secrets to being a great interviewer?

Well, I don't know about “best” interviewer, but I try to be a thorough one. By that I mean I try to be thoroughly prepared – if I'm joined by an author, that means making sure I've read his or her book. I owe the author that, but more, I owe the viewers that. The same applies to all guests – that I've vetted them completely, and know their positions and the issue they're expounding on thoroughly. It's about doing my homework. There simply are no short cuts.

What is your opinion of so many non-politicians in this year's presidential race?

I welcome this phenomenon. Whatever you think of the likes of Donald Trump or Ben Carson, they are certainly outside-the-box candidates. And given all the problems that have piled up over the years, courtesy establishment politicians, with near cookie-cutter similar backgrounds, we could do a lot worse than at least hear the other side out. If you think about it, some of our most memorable Presidents have been outside-the-mainstream guys – a fellow named Abraham Lincoln comes to mind!

You've probably traveled all over the world in your career. What have been some of the most interesting places?

Eastern Europe, by far, and I say that from the vantage point of someone who's seen it before the wall came down and now afterwards. Capitalism has its flaws and problems, but they are far more welcome challenges than the day-to-day drudgery they replaced.

Do you usually travel by air? If so, do you have a favorite airline and why?

I have no favorites, whatever gets me up and out, although when traveling to Asia, Cathay Pacific remains an over-the-top experience, even traveling coach! And Virgin Atlantic going to Europe remains a cultural gotta-do!

What has it been like traveling all over the country to cover the election?

I love when I get outside the so-called media mecca, usually cities like New York or Washington or LA. When you land in places like Sioux City, Iowa, or take in some town hall meetings in Manchester, New Hampshire, you get to see the very folks who move the meters, and provide the polls. You see they're not numbers or issues, they're flesh-and-blood concerned Americans. Every journalist should meet them, talk to them, listen to them, admire them, and respect them.

What are some of your favorite U.S. destinations?

I love the mountains, so I'm partial to places like Wyoming and Montana, and when I can, Alaska. In any of these stunning states, you appreciate the majesty of this country, and the sheer overwhelming beauty of this country.

Do you have a favorite hotel?

I've been spoiled at Four Seasons, but I've also been treated to great chocolate chip cookies at Doubletree…so let's just say, I'm not a snob when it comes to a good and comfortable place to crash!

How do you choose where to go on personal vacations?

My rule of thumb, especially with kids, is to seek out culturally enriching and equally fun places to travel, so if I'm in San Diego, I let them marvel at the ocean, but I also let them see some impressive examples of our Navy. I'm like any tourist, but with the added curiosity to check out what the travel books sometimes leave out.

What are some of your must haves when traveling?

A good camera, a good working plan, and a good primer on the best restaurants in town.

What's the most spectacular thing you've seen when traveling?

What was it like being a White House intern during the Carter administration?

It was an enormously challenging and fun opportunity to see how an administration works, and who's working. I immersed myself thoroughly in the process, first getting coffee and copying papers, and ingratiating myself in any way I could with anyone I met. I wanted to be a friendly annoyance…invisibly efficient. Even then, for a guy my size, it was tough, but they were very gracious back in those days, letting me do so.