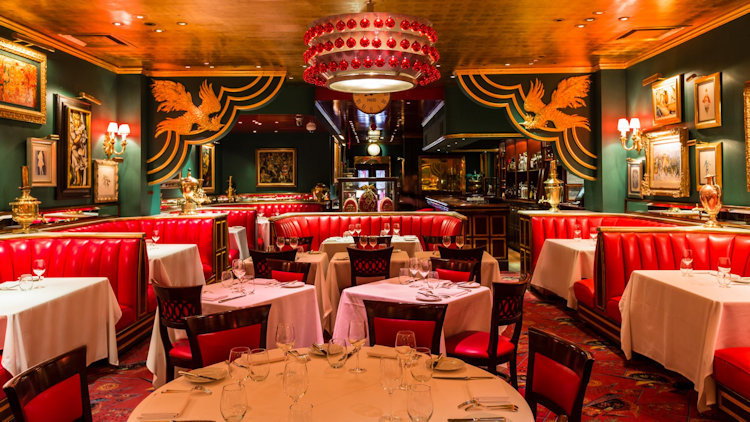 Each year more than 60 million travelers visit New York City to see such iconic landmarks as the Statue of Liberty, the Empire State Building, Times Square, Central Park or hundreds of other attractions. Visitors should add the Russian Tea Room to this list.

For over 80 years the Russian Tea Room has been a favorite respite from the hustle and bustle of the city. One of the world's most celebrated restaurants, the tea room is a fixture of celebrity and style, making it a unique New York event venue. Located at W. 57th Street near the southern tip of Central Park, the restaurant’s location serves as a magnet for scores of tourists and locals alike.

Known worldwide for its eye popping ambiance, its radiant décor is dominated by red leather banquets, a 24-carat gold ceiling, striking bronze samovars and priceless works of art that adorn the walls. The Russian Tea Room is more than a setting for tea. It is a New York City experience that never falls to amaze and impress from the moment you arrive until your last sip of tea.

Afternoon tea at the Russian Tea Room is an idyllic way to socialize – and perhaps spot a few celebrities -- before attending a Broadway play. Since being founded in 1927 by the Russian Imperial Ballet, the Russian Tea Room has been an exclusive enclave where actors, writers and politicians gather. Closed in 2002 for renovation and a makeover, it reopened in 2006 to much fanfare.

As you walk through the antique revolving doors, let your imagination wander and you can see Dustin Hoffman sitting in the booth where they filmed “Tootsie” or you can hear Madonna conserving with patrons from the coat room where she worked before finding fame. The cast of “Gossip Girl” filmed a scene sipping martinis and included several of the staff as extras.

Nowhere throughout a city that features renowned restaurants around every corner will you find such attentive, yet non-discreet service. Waiters dressed in double-breasted black coats with tails and gold buttons are at your beckon call should you desire another serving of piping hot tea or an extra buttery scone that was prepared in-house earlier in the day.

The Afternoon Tea menu features a brisk English breakfast, Indian black tea, a delicate Formosa Oolong, and Rooibos Chai, which is a South African Red Bush with Indian spices. Scrumptious sandwiches and Blinis are offered, such as caviar, Siberian Osetra, Russian Osetra, Hackleback and Paddlefish. Guests can choose from a variety of decadent desserts, including assorted seasonal scones, petits fours and a red velvet cupcake with luscious cream cheese icing that is so rich it deserves its own tax bracket.

Although widely recognized as one of the most exquisite tea rooms in the world, the Russian Tea Room also features extensive menus for brunch, lunch and dinner. Brunch patrons can indulge themselves on an assortment of pastries, a smoked salmon platter, a truffle quiche with bacon, leeks, black truffle and cheese and a caviar omelette. Lunch includes a traditional Tea Room Red Borscht with pickled red beets, seasonal vegetables and dill in a short rib and bacon broth, served with a braised beef pirozhok or boiled potato. Dinner is to be savored with such offerings as a delectable lobster salad appetizer with butter poached lobster with morel mushrooms, white and green asparagus, frisee and black truffle vinaigrette. Follow this with a Kulebiaka entrée of salmon with slow cooked onions, mushrooms and vegetables wrapped in pastry, served with Brussels sprouts, peas, fava beans and baby leeks. This being the Russian Tea Room, no visit would be complete without sampling one of the 40 varieties of vodka that are available.

New York City bursts at the seams with history and grandeur for tourists who crowd the city virtually every day of the year. The Russian Tea Room is an historical gem that provides a serene, genteel atmosphere for anyone desiring a slice of refinement.