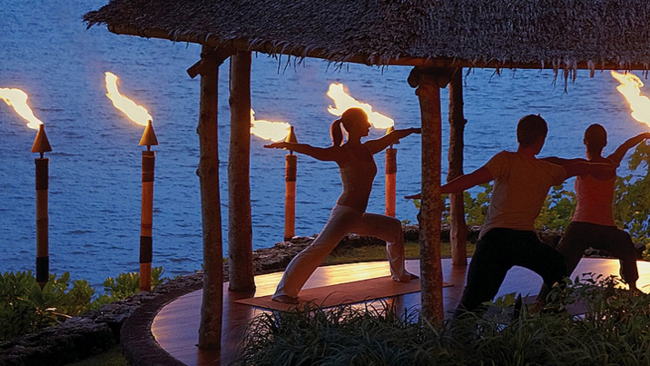 Surrounded by the warm glow of tiki torches and kissed by the sea breeze, guests are led through dynamic Vinyasa postures influenced by the fire element Manipura Chakra, inducing a state of calm and deep relaxation for the perfect pre-sleep ritual.

“The Night Fire series is exclusive to Four Seasons Jimbaran Bay and was inspired by the use of fire in many Balinese-Hindu rituals and dance,” said the resort's General Manager Uday Rao. “We combined that with the earth, wind and water elements of the resort's location to add a new dimension to our wellness program, which has been enhanced with the opening of Nirvana Shanti Yoga Bale.”

The new wellness venue is the latest upgrade at the resort following the launch of the Premier Villas and Deluxe Villas, which underwent a dramatic renovation including completely new interiors, exteriors and landscaping to enliven the graceful Balinese aesthetic and maximize space.

In keeping with the resort's Balinese village design concept, the Nirvana Shanti Yoga Bale is open-air to embrace the natural environment, with thatch-roofing and coconut wood pillars. Meaning ‘peace of Heaven' in Sanskrit, it is nestled in a secluded corner of the foreshore, offering glorious views across Jimbaran Bay and the south-west coast.

The octagonal-shaped space has capacity for up to 16 people and features daily yoga and meditation sessions ranging from Sunrise and Hatha Yoga to Meditation and internationally-certified AntiGravity or ‘flying' Yoga. The resort also collaborates with international yoga masters throughout the year to offer guests a variety of different styles. In March, visiting master Theresa Lawrence will lead Yoga Flow; in April, Peishan Cheng will lead Vinyasa and Hatha classes; and in September, sleep coach Melissa O'Shea will lead Pilates-Yoga Fusion and Yin and Restorative Yoga. The full guest yoga schedule is available online.